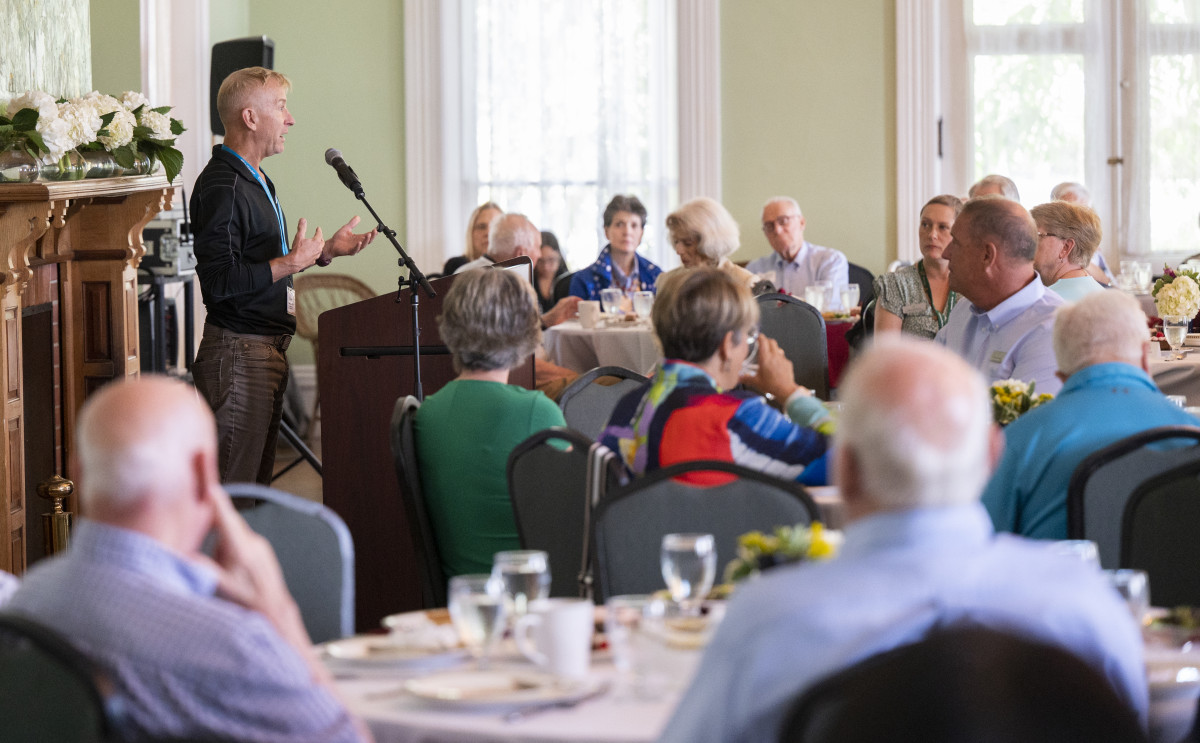 For the first time since 2019, members of the Eleanor B. Daugherty Society gathered in person for their annual luncheon, which carried the feeling of coming home, and emphasized the need for future innovation on the grounds.

Jennifer Stitely, associate vice president of advancement, opened the event with a story of meeting a Daugherty Society member in January 2020; they discussed the experience of being at Chautauqua, and “the feeling of walking through the gates, and how it feels like coming home,” Stitely said.

“It got me to thinking about one of the most significant investments that many of us make in our lifetime is the purchase of our homes. … That investment is not unlike the investment that you all have made in Chautauqua in its present and, more importantly, in its future,” Stitely said. “I want to commend all of you for your vision, and for your commitment, and for your dedication, not to what is, and not just what was — what what will be.”

The July 29 luncheon in the Athenaeum Hotel Parlor featured John Shedd, vice president of campus planning and operations, and Mark Wenzler, director of Chautauqua’s Climate Change Initiative as guest speakers, with a Q-and-A section after.

“Every year, the tremendous generosity of people like you gives us the funding and the resources that we need, as well as expertise from a lot of you, … to help us build things that make this campus nicer, better — but also to maintain (our buildings),” Shedd said. “We’re a national historic landmark, so maintaining facilities is complex, and it’s very difficult (as) we’re a not-for-profit organization.”

Each year, Shedd’s department faces a list of 500 to 600 capital projects and spends around $2.5 million. They plan both year to year, and long term.

“We also have a capital model that we use, where we’ve gone around and done building evaluations throughout all of our facilities,” Shedd said. “We continuously do that every year for our facilities, and we find what needs to happen, say, in 10, 20, 15 years. … We have a list that is 25 years out that tells us what’s coming.”

On top of that, the Institution is investing in bringing campus systems up to date.

“(We have a) technology modernization process going on right now where we’re trying to improve all of our systems and bring them into the 21st century,” Shedd said.

Other updates to the grounds this season include renewed playgrounds, the CHQ Trail opening behind the Chautauqua Golf Club, and construction of new maintenance facilities, which the Institution broke ground on in March.

“There’s two buildings there; one of them is steel, one of them is wood, and they’re both topping out as far as all the steel being in place and ready to receive roofing materials,” Shedd said. “That one’s going to probably be occupied by March of 2023, if the supply chain allows us to get all of our equipment to the target.”

The Jefferson Project recently launched two vertical profilers in Chautauqua Lake. In the next few years, five new electric car charging stations will be added to the grounds, and work is being eyed at the Athenaeum Hotel with a new master plan in its final drafting stages.

“That’ll be a multi-year project, we believe, when it happens,” Shedd said. “It’ll be great for this hotel to include some winterization so we can maybe go year-round or longer into the season, which is part of our strategic plan to try to continue our season farther into the year.”

Other projects on the radar in the near future are upgrades to the Hall of Philosophy, Bellinger Hall and Smith Memorial Library. The Institution is currently working on an accessibility study, as well.

“That (study) gets people from the parking lots all the way to the major venues,” Shedd said. “We’re identifying what would be the best pathways for people with physical challenges to make it down to the different parts of the Institution.”

Shedd also touched on the Carbon Footprint Master Plan and its focus on clean energy, and stormwater work on Hurst to divert runoff and prevent big plumes of slit from ending up in the lake.

The conversation then shifted to Wenzler, who spoke about Chautauqua’s commitment to clean energy, science and environmental practices through the Climate Change Initiative.

“The lake obviously is a big one,” Wenzler said. “One of the pillars of our strategic plan is the long-term ecological and climate health of Chautauqua Lake.”

Wenzler described the vertical profilers deployed by the Jefferson Project as “some of the most advanced lake diagnostic tools in the world.” New STEM activities at Boys’ and Girls’ Club are getting young Chautauquans involved in lake science, too; children can use microscopes and experiment with a water table to observe water flow dynamics.

One project through the Climate Change Initiative and Youth and Family Programs is a partnership with the Earth Conservation Corps in Washington.

“We’re going to have an exchange program where high school kids who are working on restoration of the Anacostia River, which is one of the most polluted rivers in the country, are going to come up here at Chautauqua and learn what we are doing at Chautauqua Lake. Then likewise, we’re going to bring Chautauqua County kids down to D.C.,” Wenzler said. “We have these kids learn from each other with very different waterways, but some similar problems. It’s a great way for us to use our position as a learning institution and as a convening place to bring people together.”

“One of the great things that we did this year is thanks to one of our donors, who really wanted everybody who comes to Chautauqua to have a basic understanding about climate change,” Wenzler said. “We created our little climate book, which you will find around the grounds, The World’s Littlest Book on Climate: 10 Facts in 10 Minutes.”

Beyond that, Wenzler hopes to encourage clean energy use.

“Just in terms of our energy purchases, National Grid has a clean energy option. We can buy non-carbon energy, like hydro and community solar. Increasingly, there are solar farms being built around this area that we can subscribe to, and homeowners as well,” Wenzler said.

The program then shifted to a Q-and-A, where issues such as historical preservation, the American Rescue Plan, the use of carbon credits, solar panels on Institution buildings, campus wide Wi-Fi and brick walk maintenance were all brought up.

Stitely noted in closing that these projects wouldn’t be possible without people like Daugherty Society members who have made Chautauqua part of their estate plan.

“Philanthropy is so critical to program, to operations, to making Chautauqua what it is during the summer season, and to what it has become during the offseason,” Stitely said. 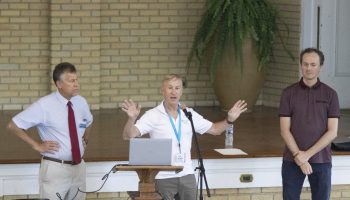 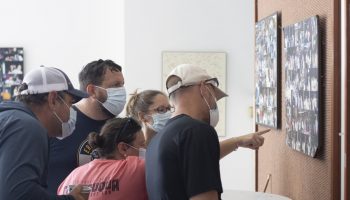 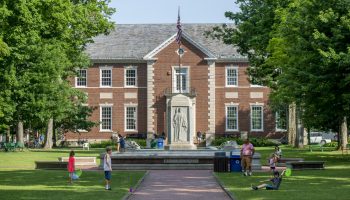 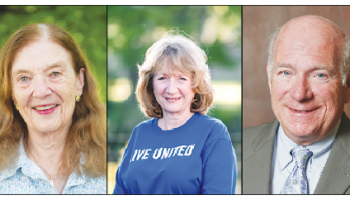