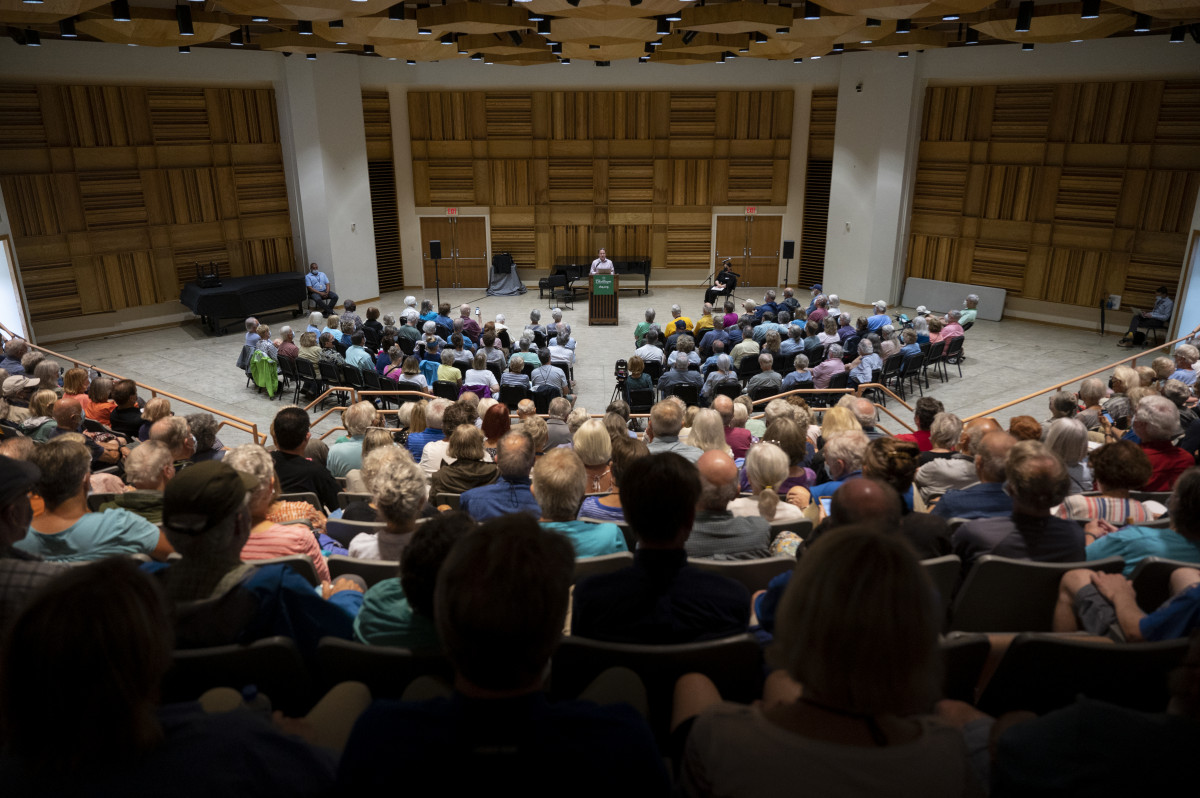 Robert P. Jones delivered the closing presentation of the Week Nine theme of “Faith and the Tapestry of the Future: In Partnership with the Smithsonian Folklife Festival,” and the 2022 Interfaith Lecture Series, Friday afternoon in Elizabeth S. Lenna Hall.

Jones is president and founder of Public Religion Research Institute, a leading scholar on religion, culture and politics and the author of White Too Long: The Legacy of White Supremacy in American Christianity and The End of White Christian America. His lecture was titled “White Supremacy, Christian Nationalism and the Fragile Future of the American Experiment.”

Jones drew on the imagery of a tapestry to start his lecture. When the United States was founded, Americans “began the project of weaving together a democracy,” he said, but that project was embedded with the logic of white supremacy.

“Now, each generation, including ours, has the brief opportunity to run the shuttle across the loom, adding our weft threads to the whole,” Jones said. “The danger is that we will obliviously simply continue the flawed pattern. The problem is, particularly for those of us who think of ourselves as white and Christian, that the flaw is nearly impossible for us to see. Our cultural position in the country has simply rendered it nearly invisible. And over the last seven years, I’ve been trying to look more closely at that fabric, to see what I’ve been unable to see before, and in some cases, what I’ve been told isn’t there.”

Jones took his Lenna Hall audience through history, trends in public opinion, and many, many data points. It is difficult, and overwhelming, he said, to confront the atrocities of the past. But we have to.

“If we want to root out insidious white supremacy from institutions, religion, and psyches, we’ll have to move beyond the forgetfulness and silence that allowed it to flourish for so long,” he said.

Few white people, even well-meaning white people, realize or believe that they have a stake in racial reconciliation efforts, Jones said.

“The question today is whether we white Christians will also wake up to see what has happened to us and to grasp once and for all how white supremacy has robbed us of our … ability to be in right relationship with our citizens, ourselves, and even with God,” he said. “Reckoning with white supremacy for us is now an unavoidable moral choice.”

It comes to down to our willingness to do “two basic, Christian things,” Jones said, drawing on James Baldwin and his work The Fire Next Time: to tell the whole truth and to love all our neighbors.

“If we can do this, we just might, in Baldwin’s words, end the racial nightmare, achieve our country, and change the history of the world — but only if we do our part, only if we pull that weft thread through for our generation in a different way. If we do that, generations from now will be able to do that and see the break in the pattern that allowed the promise of our country and our faith to finally be realized.”