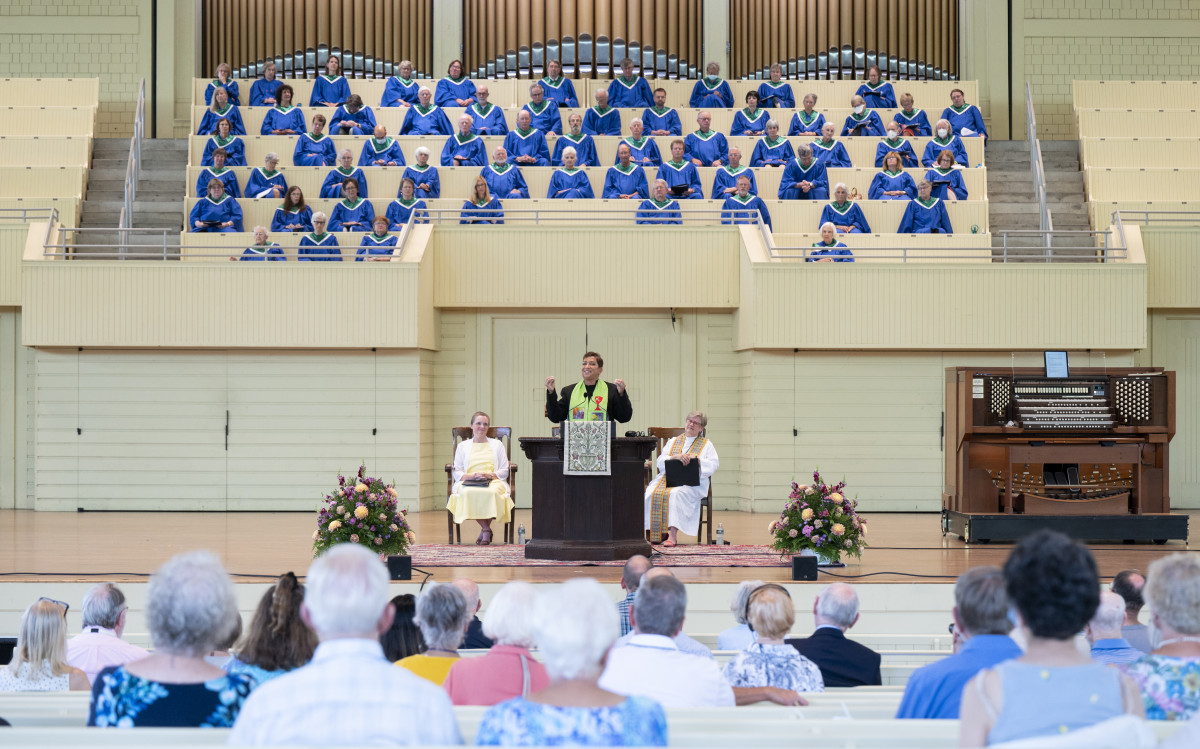 “Everything we believe must begin with what we believe about God,” said the Rev. Teresa “Terri” Hord Owens at the 10:45 a.m. ecumenical service of worship and sermon Sunday, Aug. 8 in the Amphitheater.

Hord Owens is the general minister and president of the Christian Church (Disciples of Christ) and is visiting Chautauqua for the first time this week.

She opened her sermon with a reflection on the origin of her beliefs about God, and shared that those things she learned as a child in Baptist Sunday school — the “omni-words” — continue to shape her beliefs. She shared that a theology that considers God’s omniscience, omnipresence and omnipotence will value the power and presence of God, and offer hope.

This theme, focused on the greatness of God, continued throughout Hord Owens’ sermon, titled “I Thought You Knew,” which drew from her interpretation of Isaiah 40. She noted that the second half of the book of Isaiah reflects the way in which the people of Israel struggled with uncertainty, despite the promises of God, wondering “Why are we not yet the people that God said we would be?”

The reminder of the prophet Isaiah is, however, as Hord Owens shared, that God has already revealed God’s self, and that our present task is similar to that of the people of Israel, holding the tension between the world as it is and what we know about God. God’s wonderful and powerful nature was the focus of Hord Owen’s sermon, and she emphasized the importance of recognizing that scale and scope for both Isaiah’s audience and for us today.

Digging in verse by verse, Hord Owens described the way in which God sits above the earth and stretches out the heavens like a curtain, as Isaiah 40:22 says. She asked the congregation to imagine Indiana, where she grew up, with the ability to see for miles to the horizon, with nothing but earth touching the sky. She used this imagery to contextualize how big God must be.

Continuing with the exegetical invitation to expand imagination, Hord Owens considered Isaiah 40:28, which says, “The Lord is the everlasting God. The creator of the ends of the earth. God doesn’t grow tired or weary. God’s understanding is beyond human reach.”

Given the endurance and enormity of God, she exhorted the congregation toward a hope-filled response, inviting all to action beyond the current moment.

Hord Owens acknowledged the difficulty of keeping our chins up. She recognized the suffering of the past two-and-a-half years, with over a million deaths caused by COVID-19 and the disruption in many areas of life — including the transition for faith communities to digital worship and now hybrid forms of gathering. She said her ministry as general minister and president of the Christian Church (Disciples of Christ) was disrupted, with the cancellation of the 2021 General Assembly gathering, as well as the celebration that follows being able to gather again, as experienced here at Chautauqua this season. She shared her anticipation of the next meeting of the Disciples’ General Assembly, which was rescheduled for summer 2023 in Louisville, Kentucky.

Similarly, Hord Owens acknowledged other grief and suffering, from the estrangement of families and plight of the working poor, to the threats of climate change that manifest in natural disasters. The recognition of these human failings leads to wrestling with the understanding of a powerful and loving God.

She asked the congregation to consider how the church fails when “we are more concerned about the institutions that we call the church than we are about the mission and the gospel of Jesus Christ in the world.”

There is power in lament, and Hord Owens pointed toward the place of that in Scripture, saying that it is part of the human condition to complain. She described how, in Scripture, being tired, weary or discouraged isn’t the end when confidence is placed in God.

“We have to name that we believe in God, to remind ourselves of what God has said,” Hord Owens said.

She described spiritual practices that nurture engagement with the Holy. She named prayer, the study of Scripture, including wrestling with the difficulty of the texts, and she suggested that these practices contribute to the development of deep roots of the spiritual life.

Hord Owens quoted from Howard Thurman’s book Meditations of the Heart, and reflected on her own experience of knowing about God — “Thou art with me.”

In moments of quiet beauty and awe-inspiring grandeur, she concluded her sermon with the comfort and hope found in knowing that her God knows no limits, and she asked those in the congregation to consider what they say about who God is.

The Rev. Natalie Hanson, interim senior pastor for Chautauqua, presided. Amy Gardner, vice president of advancement and campaign director, read the Scripture. The prelude, Toccata in C Major, BWV 564, by Bach, was played by Nicholas Stigall, organ scholar. The Chautauqua Choir sang “Thy Perfect Love,” by John Rutter, under the direction of Joshua Stafford, director of sacred music and Jared Jacobsen Chair for the Organist, and accompanied by Stigall. The offertory anthem, sung by the Chautauqua Choir under the direction of Stafford and accompanied by Stigall, was “Jesu, the Very Thought of Thee,” arranged by Paul Halley. For the postlude, Stafford played “Final,’’ from Symphony No. 1, by Louis Vierne. Support for this week’s services is provided by the Geraldine M. and Frank E. McElree, Jr. Chaplaincy Fund and the Robert D. Campbell Memorial Chaplaincy. Mary Lee Talbot will return as the morning worship columnist in the coming days.