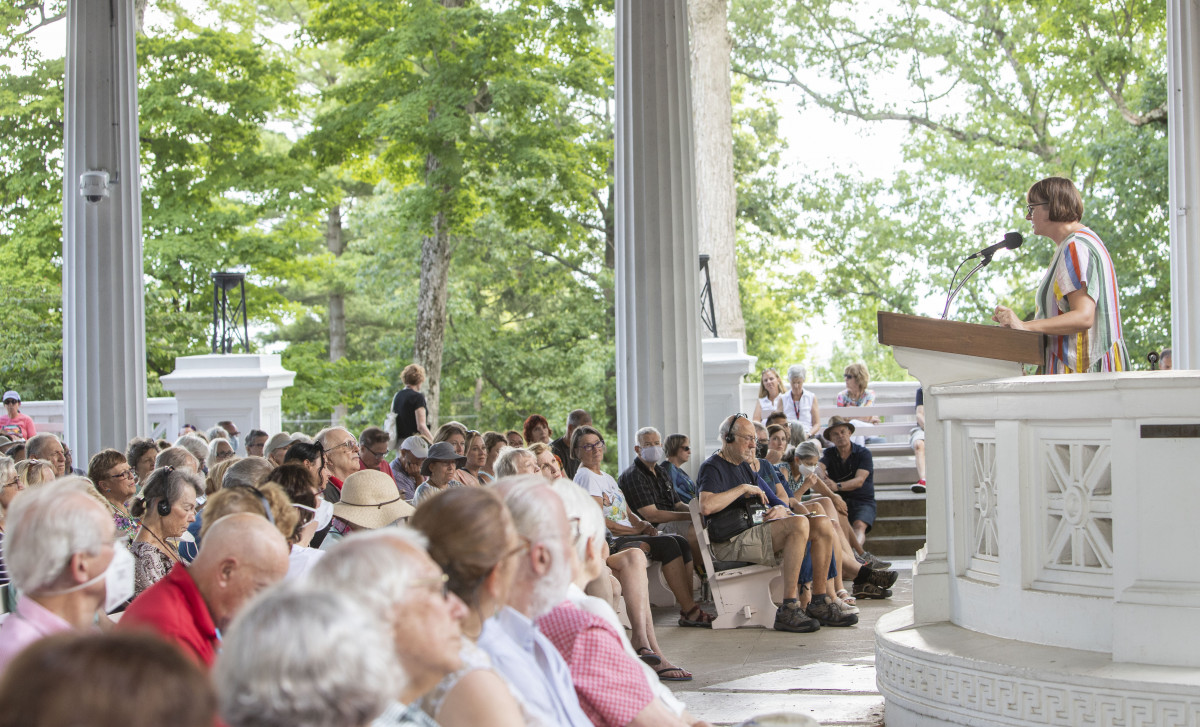 On a hot, humid August afternoon, Katherine May reminded Chautauquans that a frigid winter is quickly approaching — not just the season, but phases of isolating darkness that are always making their way to the forefront. And humans have no choice but to bear it.

The internationally best-selling author of Wintering: The Power of Rest and Retreat in Difficult Times, May closed Week Six’s Interfaith Lecture Series theme of “Embracing the Dark: Fertile Soul Time” on Friday, Aug. 5 in the Hall of Philosophy. She gave a lecture titled “Baking Bread in the Dark: Why Our Winters Replenish Us,” highlighting the importance of rest.

“By the time summer is at its height, the days are already shortening,” May said. “It sometimes feels as though summer slips away before we’ve begun to get the hang of it.”

Several cultures and religions have celebrations throughout the summer, including Lammas and feast days in August, among others. These holidays during the summer signify a celebration of Earth’s natural cycles.

But May believes people can grow their understanding of all seasons so they can treasure the darkness of the winter as much as the warmth of the summer.

“(A better understanding of these cycles) rejects the bland indictment that we must be happy at all times and nothing else, and which instead sees the value of the full spectrum of human emotion, sadness and despair included,” she said.

To illustrate this idea, May began to explain the process of baking a Lammas loaf. The hard dough is made with a dash of butter and kneaded far beyond when one’s hands would begin to feel the toughness of the bread.

The baker weaves the dough into an intricate design, and May said the product is glorious and almost too beautiful to eat. Her point was not about the delectable bread, but rather what it represents.

“A Lammas loaf is the work of hours. … It’s slow, involved and skilled,” May said. “It’s not a casual endeavor. It’s a process demanding the whole of your attention. … It is effortlessly embedded with meaning.”

Referring to the baking of bread as a ritual, May said this process can provide one with clarity and a renewed sense of meaning. It gives the baker the opportunity to slow down and be truly present with the rising of the dough.

Rituals from myriad cultures and historical periods have long provided humans with purpose and reminded them to take a break, she said.

“We need the pauses that ritual gives us. So much of contemporary life is about the denial of personal darkness,” May said. “We’re supposed to be always upbeat, always available, always bursting with energy and optimism. There’s simply no time for negative feelings. … Ritual invites those things in.”

Baking bread, chanting, singing, dancing, drumming and other practices allow one to tune into the cycles of life and release tension. Engaging in these rituals encourages people to appreciate even the darkest and most difficult parts of the process.

“(Ritual) might draw attention to cyclical time, to the way that things come around again and again,” May said. “That helps us to think about change, about how far we’ve come, about what we’ve lost.”

When May was in the midst of a dark time, she partook in the ritual of baking bagels to occupy both her hands and her mind. But the toughness of the dough broke her mixer, and the dough refused to rise. She still attempted to bake the “sad specimens,” but they exited the oven as if they were two-weeks stale. She realized the yeast she had used was at least five years out of date.

“This is how winters arrive,” May said. “It seems like they swooped down on us suddenly, but often in the empty space they open up in our lives. We can trace back their lineage through years of slow unraveling.”

These disasters, May said, are not the fault of one’s unraveling; they are rather a natural part of the cycle. However, they often show when one has not been tending to their needs.

“We live in a system that never quite seems to find balance,” she said. “… Our own requirements — social, emotional, psychological, spiritual — get perpetually deferred in a life in which everything seems urgent all the time.”

While people try to manage their needs through strict regimens and work schedules, leisure and activity, true balance never seems to present itself.

Pushing away from the fear of failure and thoughts of not being good enough, people add to their load of responsibilities, hoping one day, their perfection will come to fruition.

“Still, it all comes crashing down around our ears, and we find ourselves sitting in the wreckage completely baffled at how this could have happened,” May said. “We tried so hard to get it right.”

May said the process of wintering is painful and isolating, and described it as a time of great helplessness.

“Wintering is a process of change, and quite often, that change is negative,” she said. “… (But) wintering might be seen as a process of reckoning with the new facts before us.”

May finds the time of wintering as a beautiful season of realization. It allows people to feel the full spectrum of their feelings, if they allow them in.

May spoke on the process of writing Wintering, published in fall of 2020, sharing that the final draft of her book was due that previous March. May began trying to write the summer prior, but she found herself in the midst of writer’s block, in a season too hot to write about winter. She planned to begin writing in September instead.

But that fall, May began to deal with crisis after crisis, and her plan began to crumble.

“I tried to stick to the plan I had outlined in my book proposal, but that just seemed absurd,” May said. “What on Earth did I know about wintering if I couldn’t avoid all this? It was a joke to think that anyone would listen to me.”

Rather than writing the draft of her book, she detailed the helplessness she felt in journals, which was the opposite of what Wintering was supposed to be. The original plan of the book meant to offer comfort, not show despair.

“Christmas passed and my manuscript stubbornly remained the same length it had when I wrote the proposal a whole year before,” May said. “With nine weeks left until I was due to submit my book, something broke in me. I had to write something, so it might as well be my own story.”

Although May thought this draft was terrible, this story allowed the reader to walk alongside her struggles.

“The work we do in darkness is different,” May said. “… It’s urgent, necessary, propelled forward by a different kind of energy. … What pulls out of us in moments of existential threat and suffering can feel external to us, as if handed down by another consciousness entirely. To me, that is evidence of the profound transmission that takes place in these seemingly empty and useless parts of our lives.”

Comparing these times of darkness and wintering as a caterpillar’s chrysalis phase of becoming a butterfly, May said the destruction of one’s old self can reveal a more beautiful and powerful existence.

“The caterpillar digests itself. It dissolves all its tissues until all that is left is liquid and some clusters of cells called imaginal discs, which is the seed for the next stage in its life,” May said.

We also must undergo transformations of this type in a different sense, May said. People must be open to growth, despite how painful and uncomfortable it can be.

“If we become permeable, we not only expand our wisdom, but we also merge a little more with the other humanities around us,” May said. “Wintering is always a communal experience. If we let it, it deepens our compassion and wisdom, and draws us a little closer to that beautiful community of all of us across all time.”

She touched on the poem “Dark Night of the Soul,” by St. John of the Cross, a 16th-century Spanish mystic and priest, and recognized Cross’ interpretation of the dark night as an ecstatic place.

“It seems to me that John captures the exact moment after the crisis,” May said. “The moment when we … stop resisting the changes that are already being made (and) can ride in their slipstream instead.”

May is confident that humanity understands darkness better than they might think, no matter how much people may push it away. Humans have always faced darkness, she said, and they will continue to enter dizzying spirals of darkness and light.

“Winter is (not) easy or terrible, but it is a fundamental part of our psyche,” May said. “(Wintering is) an element of a cycle that is, in itself, whole, in which promises to make us whole, too.”