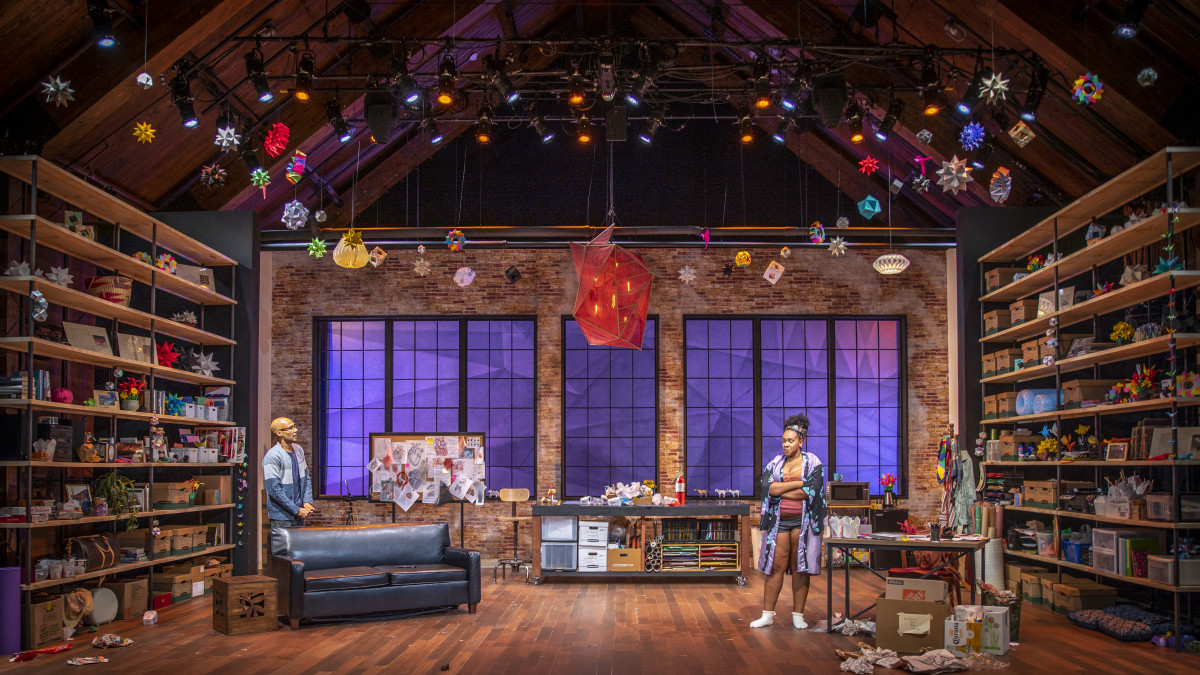 Many-pointed paper stars perched on shelves and hanging from the ceiling in bold primary colors and dreamy opalescent swirls of blue and green. A fluttering string of jewel-bright paper cranes clambering up the side of a towering shelf. A suitcase half-unpacked, clothes spilling out onto the floor. A bulletin board layered with anatomical drawings of the human heart.

These are the trappings of Ilana’s origami studio. The central character of Animals Out of Paper is in a transitional state, going through a divorce and living in her workspace while she tries to figure out the next place she’ll call home.

Nicholas Ponting, the scenic designer for the Chautauqua Theater Company production of Animals Out of Paper, said that the personal photos lining Ilana’s shelves are real photos provided by the guest actor who plays Ilana, Breezy Leigh.

“That level of detail is really exciting for me,” Ponting said.

As Ilana, a world-class origamist, strains to hold together the fragments of her life and maintain her grasp on her craft, two individuals enter her orbit: Andy, a high school teacher and ardent admirer of Ilana’s work, and Suresh, a student of Andy’s who recently lost his mother and is something of an origami prodigy.

The characters form wobbly connections and tentatively reach toward one another in an empathetic meditation on hurting and healing. Animals Out of Paper will conclude its CTC run this weekend with a performance at 4 p.m. Saturday in Bratton Theater and two performances at 2:15 and 7:30 p.m. Sunday, Aug. 7 in Bratton.

Designing the set for Animals Out of Paper involved attention to detail and, of course, a lot of paper. A props department technician, Mer Platt, made about 10 pieces for the show. A local paper artist who prefers to remain anonymous donated hundreds of pieces. The intricately handcrafted items range from cranes that can sit in the palm of your hand, to a life-sized hawk.

Ponting was very thoughtful about which elements to include in Ilana’s studio. The audience meets Ilana at a low point, working on an all-consuming project that, in the midst of her personal turmoil, has her stumped. She was commissioned by a medical research team to fold a mesh sleeve for a human heart — not as art, but for surgery. The bulletin board with its layers of drawings represents her frustrations.

“We made (the board) full of chaotic stuff,” Ponting said. “She started out organized, and then little by little, she keeps adding things on.”

Ilana has a kitchenette in her studio, a mini-fridge and a microwave more suited to a college dorm room than an adult woman’s home, and a sofa that pulls out into a bed. Two immense sets of shelves frame the stage, filled with boxes and pots of origami flowers side by side with real plants.

Ilana’s studio is one of three settings in the play. The other two are a hotel room and a restaurant, but the design team did not create any major set changes. The crew brings out a few items to transform the studio into the restaurant, while Ilana’s sofa bed becomes the hotel room’s bed.

“And then with lighting and staging, we tell the story,” Ponting said.

The studio is a mishmash of Ilana’s work supplies and personal effects. Underneath one shelf lies an empty blue-and-white patterned dog bed and unfilled dog food bowls as a nod to another recent tragedy in Ilana’s life.

“Ilana references her dog that she lost in a fire, and so just to tug on the heart a little bit, we have her dog’s stuff that she can’t get rid of yet,” Ponting said. “Those kinds of little details are really my favorite part.”

Ponting, who is a glass artist as well as a scenic designer, relates to the play on a personal level. Like Suresh, he lost his mother — who was a stained glass artist herself — in recent years. Ponting cites his mother as his primary creative inspiration, and wishes she was around to see him grow and evolve as an artist.

“Suresh lost his mom, and so there were things about the story that I found that I could easily connect to,” Ponting said. “Seeing the weight that he has to carry, losing his mom like that, and then having to help his dad and his family, it’s so clear that he wants to just help fix things. I feel like I’ve lived that for the last couple of years.”

In addition to his mother, Ponting is inspired by other creatives, and by the exchange of ideas and conversations. With a set as detailed as the Animals Out of Paper one, he was grateful for the opportunity to consult with other members of the design team.

“Getting to know the production staff here, people that are here all summer, and seeing how hard they work and how much they do is really impressive,” Ponting said. “I was happy to be able to help, to go in there and do things and get to know the people making the thing. That’s been really rewarding, working with this creative team.” 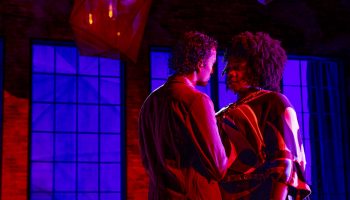