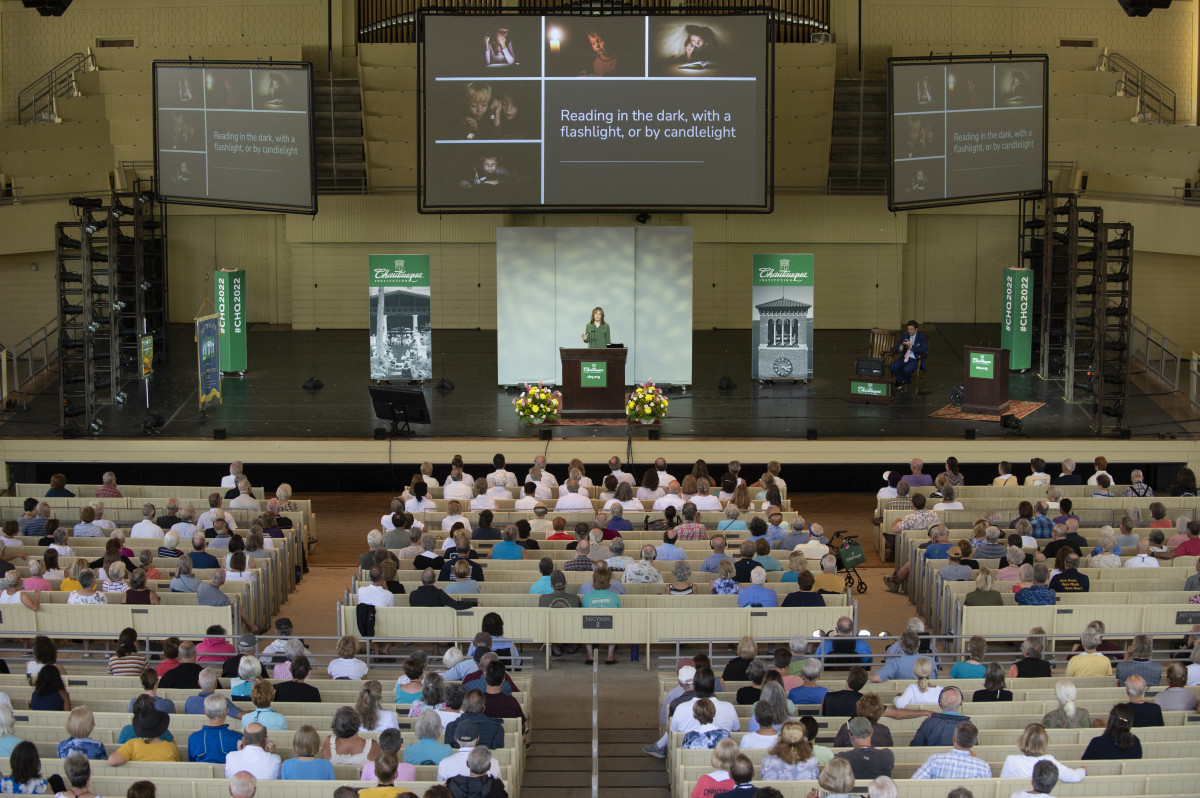 Maria Tatar has spent decades studying folklore and mythology, implicitly and tangentially exploring the power of darkness and light in the stories we tell ourselves.

And yet, after her initial excitement over the invitation to speak for the Chautauqua Lecture Series and the theme, “After Dark: The World of Nighttime,” she had second thoughts.

“Darkness? What do I know about darkness?” she asked. “… But what I could possibly say about darkness quickly yielded to: ‘There’s way too much to say.’ ”

Google took her to Philip Pullman, Milton, Star Wars, Ursula K. Le Guin, and Leonard Cohen, whose “Anthem,” featured in Wednesday’s ecumenical worship service, includes the phrase: “There is a crack, a crack in everything. That’s how the light gets in.”

“Darkness and light, of course, are what we live in and what we live by,” she said. “The words we speak are saturated with metaphors drawn from the realms of light and dark.”

Tatar is the John L. Loeb Research Professor of Germanic Languages and Literatures and of Folklore and Mythology, Emerita, at Harvard University, and the author of, most recently, The Heroine with 1001 Faces — a response to author Joseph Campbell’s seminal work. But it was a different author she told Chautauquans she’d be highlighting in her Wednesday, Aug. 3 lecture in the Amphitheater, which was titled “Light in the Night Kitchen” — children’s book author Maurice Sendak. A lecture on books, culture and meaning, it was a fitting conclusion to the Chautauqua Literary and Scientific Circle Class of 2022 Recognition Day Ceremony; graduates sat front and center in the Amp as guests of honor.

Before she got to Sendak, however, Tatar had to cover the nature of primal fear and the power of storytelling, the Enlightenment, and how aesthetics informed the cultural meaning of black (and Black) and white. So she started small.

“For a long time, I was afraid of the dark,” Tatar said. “One night, with the help of a flashlight I swiped from my brother’s room, I made friends with the darkness. Suddenly, there was light; it was a little dim, but portals magically materialized. I found myself standing on thresholds that led to Neverland, to Narnia, to Wonderland, and to other outlandish places.”

Letters, she said, lit up her world. And they kept illuminating it.

“Letters and light banished my fear of the dark and of much else,” she said. “Reading may require candles, light bulbs, and other sources of illumination, but storytelling paradoxically, at least oral storytelling, is an art that flourishes at night and in the dark.”

Dreams let us tap into our unconsciousness, she said, evoking neuroscientist Sidarta Ribeiro’s Tuesday lecture. That, combined with human beings’ capacity to develop language and symbols, means we are both storytellers and interpreters.

“Anthropologists tell us many cultures forbid storytelling in the daytime, but once the sun sets, the moment comes for ‘once upon a time’ or other beginnings for stories,” she said, as she invited the audience to go back in time with her to a period when “ … nocturnal beasts are on the prowl. Mobility is limited. The labors of the day have fatigued bodies. So it’s time, then, to listen to the music and to the muses of the night.”

Man-made light, from campfires to lightbulbs, promotes activities “designed for a time when the sun disappears, when darkness descends on us,” she said. But as technology became more sophisticated, capitalist economies exploited the dark. Yet, storytelling has not disappeared.

“Today, it’s a common practice to elevate storytelling with metaphors that reflect the social origins of the practice. We exist together in a little patch of warmth and light. … That patch of warmth and light powerfully evokes the heat and light generated by the campfires of our ancestors, and also indoor hearths of the generations that followed. In the comforts of electricity and central heating, along with the instant conveniences of smartphones, we continue to adapt storytelling, reading, … teeming with luminosity and warmth.”

Even e-readers, like Amazon’s Kindle and Barnes and Noble’s NOOK, have names that evoke the warm spaces where our ancestors gathered. More than warmth, universally, light — and light bulbs — serves as a metaphor for knowledge, even genius.

“Nowhere is that link between light and learning more clearly demonstrated than in our collective veneration of the Enlightenment as a source of reason and progress,” Tatar said. “This is (the period) in human history where we discovered the liberating power of knowledge, of education.”

As a professor of Germanic languages and literature, she had to draw on Kant, and the declaration that “ ‘the enlightened are not afraid of shadows.’ Once again, cementing the superiority of light over dark and affirming how epistemology, the science of knowledge, can rarely escape the metaphorical trap inherited from those campfires that served as sites for transmitting knowledge.”

If light is the embodiment of knowledge, it is only so because of theological traditions that said what is sacred, is luminous.

“Today, what is holy?” she asked. “What’s sacred, but knowledge? Knowledge is endowed with the aura of the sacred.”

Black, darkness, is symbolic of chaos and death, of both the Furies of Greek mythology and, more recently, dark matter and black holes — which, Tatar pointed out, Stephen Hawking showed “at least the really tiny ones, are actually radiant.”

“In line with the metaphorical logic of Enlightenment philosophy, daytime is dominated by reason, legibility and clarity, while nighttime is associated with opacity, irrationality and all of these sinister forms of darkness,” she said.

This bifurcation leads into “treacherous terrain with a force field of vectors, ranging from sin and evil to the diabolical and demonic … in a more pronounced form from the 18th century onward,” Tatar said.

Black has, subsequently, become the preferred hue for the wardrobes of villains, vampires, witches and wizards, coding their evil with hints of purple or green. In Western cultures, wearing black is a signal of mourning and loss, while white is for christenings and weddings. But modern culture is “working the transvaluation machine,” Tatar said, turning a villainous trope like Maleficent from Disney’s “Sleeping Beauty” into a “victim, heroine and savior, associated with the forces that were traditional light.”

Aesthetics extend beyond color theory; the use of chiaroscuro in silent films and noir cinema further bifurcated light and dark.

“The drama of light and shadow is so powerful (in these films),” Tatar said. “… What we’ve seen as a productive interplay of the two, in aesthetic terms … may appear to be skin deep, but in fact, is far more than that.”

Moving from aesthetics to ethics, Tatar came to a question that is “a profound part of our social and cultural landscape” — race and skin color in the United States.

She showed a clip of Spike Lee’s 1992 film “Malcolm X,” in which two characters have a conversation about language and the cultural binary of black and white — literally taking to the dictionary for definitions on “black” and “white,” and all the connotations involved.

Fiction writers have tried to undo that binary, Tatar noted, but change is a challenge.

“The instinctive response of some Black writers was to conceal darkness by blending in with it and becoming invisible,” she said. “It’s precisely because black is so fraught with symbolic meaning that Barbara Neely, a Black writer of murder mysteries, named her detective protagonist – in a genius stroke of deep irony — Blanche White.”

Blanche, who is Black, takes a job as a domestic worker to solve murder mysteries, using her race to blend in and not raise suspicions. It’s the same approach used in Ralph Ellison’s Invisible Man.

Tatar highlighted a more recent book — Jason Mott’s twisting and bending Hell of a Book, which won the 2021 National Book Award and was a finalist for the 2022 Chautauqua Prize.

“(This character) is an author-protagonist who has a startling epiphany, a burst of human insight about how his character, Soot, could be seen at last, how he must be seen,” she said. “He also has this epiphany about how you recuperate the power of Blackness, the beauty of Blackness, while also pairing it with light, in a move that reveals their reciprocity and independence.”

The imagery Mott creates resulting from that epiphany, of light reflecting through the lens of darkness, Tatar said, shoots out “something more beautiful than I have ever seen.”

Before we ever read books like Hell of a Book, Invisible Man, The Color Purple or Barbara Neely’s murder-mysteries, we read picture books — like Goodnight Moon (she played a clip of the book being read by Christopher Walken) or Maurice Sendak’s In the Night Kitchen.

“I want to take us to those books, because they are foundational,” Tatar said. “What children grow up with, that’s how they inherit these ideas about light and darkness, so we have to think carefully about what we read and think carefully about the conversations we want to have after we read those stories.”

In these stories, “darkness can be a source of existential anxiety,” she said, but also a rich place of creativity and imagination.

“In the Night Kitchen explores the power of darkness to transform the anxiety bred by the dark into wonder. … This magical process is something of a myth-making process,” Tatar said. “Sendak himself emerges as the supreme mythmaker with a book that draws on the memories of materials of everyday life to construct a story that has taken on, I think, the cultural authority of a myth.”

From the Enlightenment to Spike Lee, E.O. Wilson to Leonard Cohen, aesthetics to Christopher Walken, Immanuel Kant to Maurice Sendak, Tatar tried to sum it all up: The values attached to light and dark are by no means transhistorical, or transcultural.

“The hierarchical structures that we’ve embraced can be reversed — better yet, leveled and turned into a partnership in places that darkness is valued as a source of transcendent beauty and knowledge beyond good and evil,” she said. “Our symbols are kaleidoscopic. They transform themselves with the flick of a wrist and the blink of an eye.”

Light and dark are not always at war; they can be in relationship, with symbolic power that strengthens each other, rather than diminishes.

“Instead of framing the dialectic of light and dark in terms of good/evil, innocence/sin, knowledge/ignorance, the concepts can be spring-loaded with bidirectional energy, depending on each other for richer, more productive forms of cultural energy,” she said.