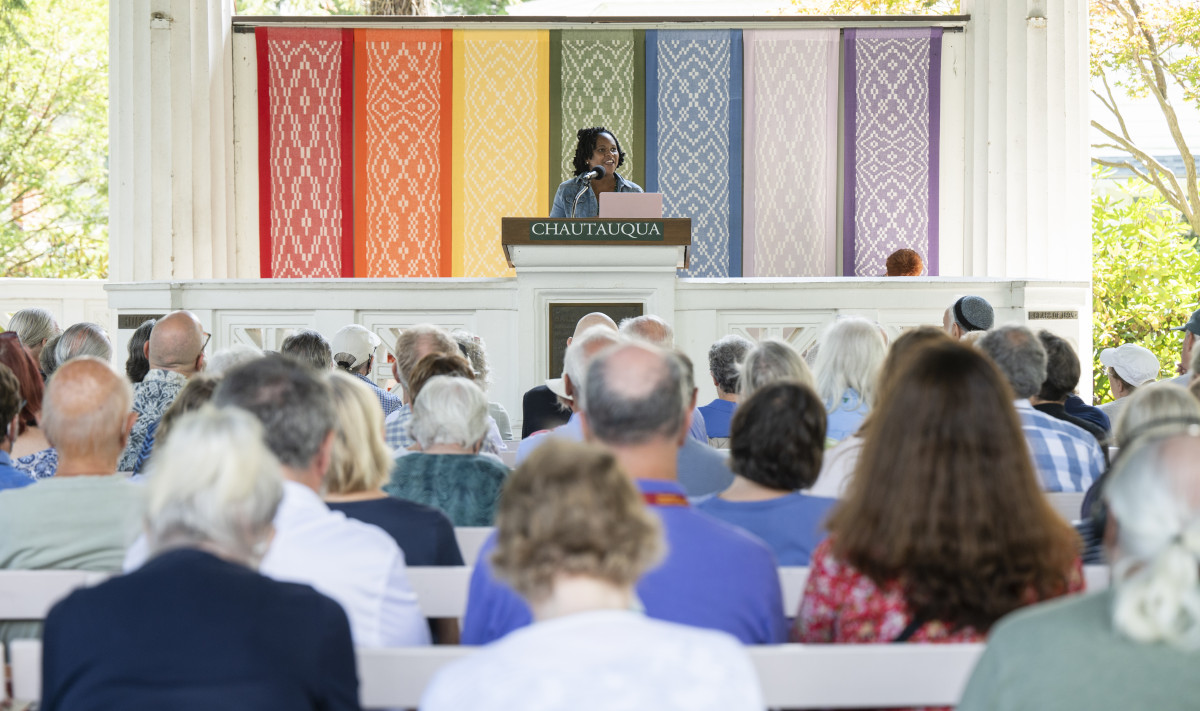 Yolanda Pierce grew up reading Scripture in the pews of a Pentecostal church. And yet, she believes that faith is more than simply reading text on a page — it’s about taking conscious actions and steps to bring those words to life.

“We have all the resources we already need to solve problems in the world; we lack the will to do so,” Pierce said. “Our divine imagination helps us create, imagine and call forth a different world than the one in which we currently live. The (gifts) that God has given to us are shared, so that all in fact may live.”

Tuesday afternoon in the Hall of Philosophy, Pierce gave her lecture on “A Grammar for Racial Justice: How Religious Talk Can Save The World,” continuing Week Nine’s Interfaith Lecture Series theme of “Faith and the Tapestry of the Future.” Pierce is professor and dean of the Howard University School of Divinity, and the founding director of the Center for the Study of African American Religious at the Smithsonian Museum of African American History.

Pierce began her career as an English teacher but then took a completely different course. After receiving an undergraduate degree in teaching, she attended graduate school at Cornell University, where she studied to be a theologian and earned her doctorate in philosophy.

Pierce said that in her brief time as an English educator, she learned a valuable lesson.

“Teaching was not for me; I ended up learning more lessons than the students,” she said. “One of the things that I learned is how important vocabulary is.”

Pierce turned the Hall of Philosophy into her classroom, introducing Chautauquans to three religious vocabulary words: soteriology, eschatology and ecclesiology.

She started with Micah 6:8: “He has shown you, O mortal, what is good, and what does the Lord require of you? To act justly and to love mercy and to walk humbly with your God.” The verse centers on what God, in the Christian Bible, asks of humanity.

“The commandment that God has given his people at Micah 6:8 is not a suggestion,” Pierce said. “… It’s what God requires of you: to act justly, to love mercy. These are verbs and actions, words, things that we each must do.”

Pierce believes that racial equality must be included in the definition of justice.

“The words I am going to give you today, you probably already know well,” Pierce said. “For me, at the center of this (pursuit of justice) is what we call racial injustice. All other forms of justice are tied into the confines of how we do racial justice.”

Racial inequalities are pervasive in U.S. society, yet many people fail to recognize that these injustices exist, because they are solely focused on their own experiences. Pierce described the nation as becoming increasingly racialized.

Beyond environmental issues, Pierce pointed out how maternal mortality disproportionately affects Black women, who are three to four times more likely to die during childbirth than white women are.

Pierce said faith has become a perpetrator and source of inequality. She discussed how religious institutions, many of which were founded on the ideals of unity, communion and acceptance, are further contributing to social tensions and racial divisions.

Pierce strives to solve these problems. She said the central inquiry that informs her mission and work is, how can she achieve God’s justice on Earth, helping to make it a better place for all of inhabitants?

She asked Chautauquans to consider a list of different questions. One of the main questions Pierce proposed dealt with how society can make faith accessible and welcoming to those at the “undersides of communities,” she said. Pierce encouraged Chautauquans to consider how they can open up their own religious spaces and environments to traditionally excluded, marginalized and disenfranchised communities.

While Pierce firmly believes in the importance of helping others, she acknowledges that not everyone shares that sentiment. The first religious vocabulary word she introduced was soteriology, defined as a doctrine of salvation for people to follow on Earth. Traditional understandings of this concept, Pierce said, are flawed and have potentially problematic implications.

Through the pursuit of one’s own soteriology, or salvation, an individual can easily become self-centered, leading them to forget about their responsibility as Earthly residents to help and assist others.

“For the Christian community, soteriology is the very fundamental question that so many Biblical characters (pondered),” Pierce said. “… In the Christian tradition, it is about salvation. But I want to express to you that the ways in which to deploy this are far too individualistic and hierarchical. ‘What must I do to be saved?’ positions the ‘I’ as the object of salvation.”

“A racial grammar can help save the world if we pose a different question,” Pierce said. “I would like individuals to ask the question: ‘What must I do to be safe?’ … (Safety) is not a word that only applies to an individual. Can you imagine if we asked what we must do in order to make entire communities? There is a way in which we employ ancient (religious) vocabulary to do the work of unfortunately being individualistic saviors.”

Instead of working as individuals, Pierce believes that society needs to work together to make social changes, to transition from being a self-centered circle to one of unity.

Many groups have not been openly welcomed into sacred environments, causing them to become disillusioned with religion. While sacred spaces have been sources of healing and renewal for some, they have become unsafe environments of exclusion for many, including women, African Americans  and members of the LGBTQ community.

“For some of us, our religious spaces have been places of safety and salvation. They have literally been saving places,” Pierce said. “But there are so many people who have been wounded in these same spaces. The thing that saved us, that sanctuary for us, for others has been a space of condemnation.”

Instead of using religion as a weapon, Pierce believes it should be used as a tool to rebuild for people who have become broken into pieces by man-made prejudices like racial inequality, gender discrimination and homophobia.

Pierce’s second religious vocabulary word was eschatology, which focuses on notions of life beyond death. In Christian theology, it is the question of what happens to a person after they finish their Earthly course — do they go to purgatory, hell or heaven? Traditional understandings of this ideology are incomplete, Pierce said, because they often cause individuals to focus on life after Earth, rather than life on Earth. Eschatology, however, is not merely about waiting for divine salvation — it’s about attempting to make changes in the present moment.

“I think our eschatological hopes are too narrow,” Pierce said. “The ancient language of our faith eschatology asks, ‘Where do we go when we die?’ I want to provide you with an alternative eschatology. In this, I want you to ask, ‘Can I live?’ …  I want to think about (the question) in terms of racial justice. … What kind of world do we want to see on Earth as we might one day want to see in heaven?”

“But ecclesiology, if it is in fact to be connected to this work of racial justice, has also to be the study of how the spaces that are supposed to heal us have harmed us and perpetuated the worst of racial stereotypes,”  Pierce said. “And perhaps even worse than that, our sacred spaces have been places of silence.”

Pierce emphasized the silence that is sometimes condoned by religious institutions.

“When the questions of life, when the harshness of this nation and this world, when the brutalities and the murders and the wars and the abuse are being committed, sometimes we have been silent. I want an ecclesiology that grapples with our personal histories and our equally (important) history, so that we can interrogate and dismantle the active and passive harm that we sometimes do by being silent.”

Pierce wants every community to have a voice in religious spaces, and hopes to lead a “resurrection of faith.”

“The work of taking the grammar of our faith, and sitting with the commandment we have in Micah … is the exciting part of the work that we get to do,” Pierce said. “… But it is only meaningful if, at the end of what we do, people’s lives are being changed, impacted and transformed. We have grammar, we have language, we have Scripture, we have tenets, we have creeds. But they are meaningless unless you are in fact the hands and the feet of God for the work of justice.”