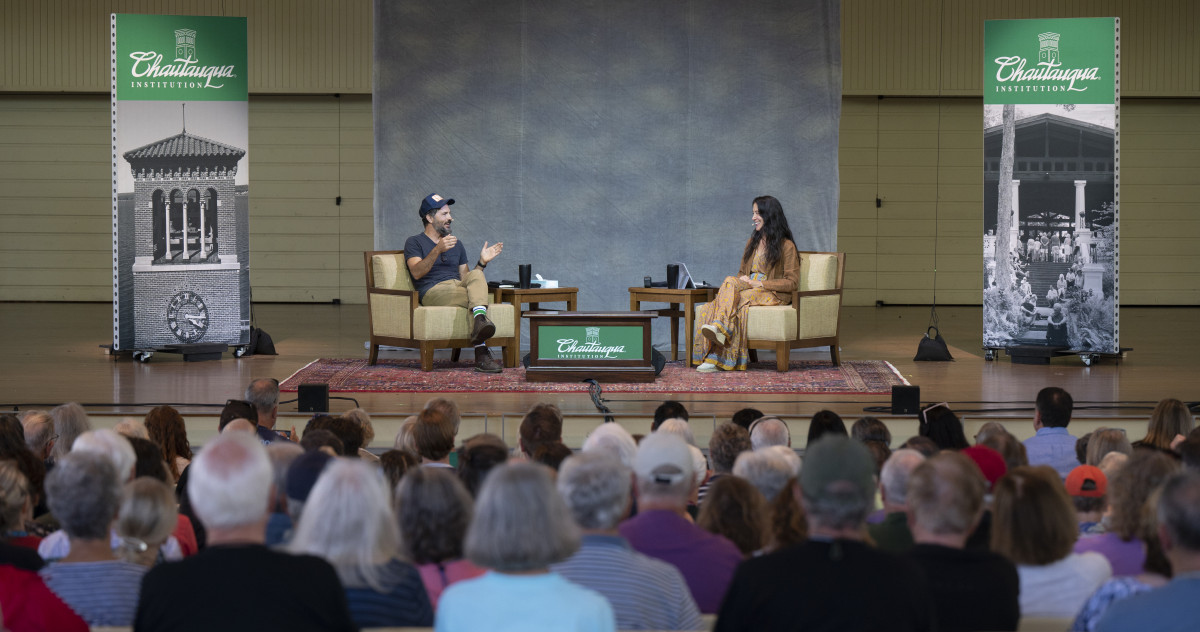 Scott Avett is no stranger to the Amphitheater, and for the Wednesday, Aug. 24 morning lecture, the musician and co-founder of The Avett Brothers finally brought the conversations he’s had with Senior Vice President and Chief Executive Program Officer Deborah Sunya Moore over the years front and center. In previous years, they would talk backstage about music and Chautauqua, and since The Avett Brothers are considered a folk rock band, it only made sense to invite one of their lead vocalists as part of Week Nine’s dialogue on “A Vibrant Tapestry: Exploring Creativity, Culture and Faith with Smithsonian Folklife Festival.”

One of the first conversations the pair had was about the origins of Chautauqua Institution, whose roots were originally in the Methodist Church. Avett, whose grandfather Clegg Avett was a Methodist minister, grew up going to a Methodist camp in North Carolina.

“But the Methodist heritage, tradition and the memories of songs — that spirit certainly lives here, you can feel it … the settled nature of it,” Avett said.

With his grandfather being a minister, he explained how being raised by a preacher’s son was much different than being a preacher’s son. His dad was less stringent about his kids following specific traditions.

“Our experience with worship and the church became one of loosely gripping the most consistent, and I guess important, and only thing there is: that mystery that is God,” he said. “From a preacher’s son, it becomes more like, ‘Take it easy. Don’t take this stuff so serious.’ And that was important for us. That was key.”

Clegg Avett was an important figure in his grandson’s life, and both Avett’s uncle and Avett himself published his sermons. Moore asked what aspect of the sermons led Avett to publish them.

Avett always knew that his grandfather’s congregation loved him, and as Avett reached his mid-30s, he turned to those sermons.

“Around 33 or 35, the reality of ‘life is not forever’ just really had taken its full grip, I think,” he said. “… It had taken its full root, and I was curious, and there was this book with my grandfather’s face on the front of it.”

Clegg Avett’s sermons included discussions of figures like Gandhi and Martin Luther King Jr. as well as Chinese proverbs, which surprised Avett since his grandfather was a preacher in North Carolina from the 1930s to the 1970s. But, Clegg Avett was not opposed to speaking what he felt to be true, and had received threats from the Ku Klux Klan because of his sermons.

“In reading those, it moved me and just nudged me. … The next book was Gandhi’s autobiography,” Avett said. “And then the next thing was — wait, Gandhi mentioned Tolstoy and how Tolstoy wrote about Christianity.”

Avett fell in love with Tolstoy’s Christian writings, which continue to influence his music and writing.

Moore was curious about some of Avett’s other influences, specifically from his family.

Avett likens his home to as “Little House on the Prairie” as the 1980s could get. His family lived at the end of a half-mile red clay road, which the school bus would never drive down.

“My dad built the house on his own. It was untreated, pine siding,” he said. “We couldn’t get cable out there. There was never cable in our life.”

His mom was an intelligent, worldly woman, well-traveled because of her father’s position as a one-star general; and his dad was a welder, who came home every night in burned denim.

His father played drawing games with Avett and his siblings, and while having a blue-collar job was the main way to make a living in their corner of North Carolina, drawing and the music his father played showed Avett how creativity was still possible. He admitted that he understands how idyllic life in the country sounds, but that truly was his experience.

“It was literally the broom grass where the deer had laid down, it was a good place to sit and just see how the sun hurts when I stare at it for a little while. And later, that was where you smoked the cigarettes you got from your dad,” he said. “It was deep, rich and I’m so grateful for this soulful existence.”

Since Avett’s childhood gave him a chance to be bored and thus have time to create, Moore asked if there were other values instilled in him from his childhood in North Carolina.

Avett admitted that he does not know if he could claim his values as particularly North Carolinian, but he appreciated how North Carolina is geographically diverse and gave him a chance to play in different areas, whether it was the rural area where he grew up or a nearby city.

“I was very grateful for my art school. I went to the East Carolina University Art School,” he said. “And the town is so small … you can really make a lot of mistakes there without causing too much damage.”

Moore pointed out how there seems to be an overall theme of goodness in Avett’s life.

“Zooming out to our experience when the band comes, when The Avett Brothers come, there’s a distinctly indefinable quality to your fan base,  and yet there’s also a very recognizable quality where there’s this — I’m going to say goodness — about your fan base,” she said.

One time The Avett Brothers came to perform at Chautauqua, Moore remembers a mass of fans approaching the Amp with beers in hand. Since only water is allowed in the Amp, she worried about having to tell everyone they could not bring their beers inside. When told this, all of the fans were gracious and did not hesitate to comply with the rules — whether it meant dumping their drinks out or quickly finishing them. To Moore, this exemplifies a quality of goodness that she’s experienced in many of the band’s fans.

“We weren’t designers of the good things that the people do or how they carry themselves,” Avett said. “And we’re probably not the designers of our own goodness.”

The only thing Avett could point to is that he and the other band members prioritize being true to themselves and being sincere. He admitted that some days he does not feel his best, he even finds himself ugly, but showing up as you are, at work or at concerts, is what matters.

“So I’m curious,” Moore said. “There must have been a time when you started to make it (big), where you were more in danger of that shifting and becoming less yourself. How did you and Seth and the band stick to that original authenticity and not become something that, I assume, people were trying to prescribe for you?”

For Avett, authenticity is just there. It isn’t something you have to search for, but it’s something you can ruin. He compared it to his Methodist faith and God’s love.

The Avett Brothers had a 10-year rise to fame. Whereas other musicians sometimes seemingly catapult into the spotlight, they had a slower ascent. That gradual gain in popularity, versus becoming famous very quickly, helped keep The Avett Brothers grounded.

Avett had repeatedly mentioned his faith in answering several of Moore’s questions, so she asked him to talk about how, while his faith is important to him, The Avett Brothers is not considered a Christian band.

Not every member of the band shares his faith, and while Scripture influences Avett, he said he has numerous other influences, too, such as the poetry of Rumi.

All of these go into songwriting, which Avett does with Seth Avett, his brother and fellow bandmate.

In this way, Avett feels concerts can draw people together better than churches can.

“We’ve witnessed fans that we knew personally, hard right and hard left, having a beer together,” he said. “And that’s the point.”

Before Avett and Moore paused their conversation (for now), she read a passage from Thomas Merton, the American Trappist monk whom Avett often quotes.

“Literature, contemplation, solitude, Latin America, Asia, Zen, Islam, etc. All these things combine in my life,” she read. “It would be madness to make a ‘monasticism’ by simply excluding them. I would be less a monk. Others have their own way, I have mine.”

When asked to reflect on this quote, Avett said that studying many different texts and traveling to new places allows him to be a folk musician.

“There’s nothing wrong with being a North Carolinian. It’s OK,” he said. “But I’m allowed to be that way more when I’ve been around.”

Engaging with the world around him lets him be the best folk musician he can be, because, ultimately, Avett sees folk music not as a genre but as creating something from your heritage and what is around you.

When Moore and Avett first discussed him coming for a 10:45 a.m. lecture, Avett said he journaled through his perceptions and definitions of folk music.

“Folk music is likely much less a genre conversation and more a conversation about commonality, leading to inevitable oneness,” he said. “This is not to say that folk music or music alone, for that matter, has been given the task or even the ability to unify all people. But it is to say music, especially music for all people, does a great job at pointing out commonality.”