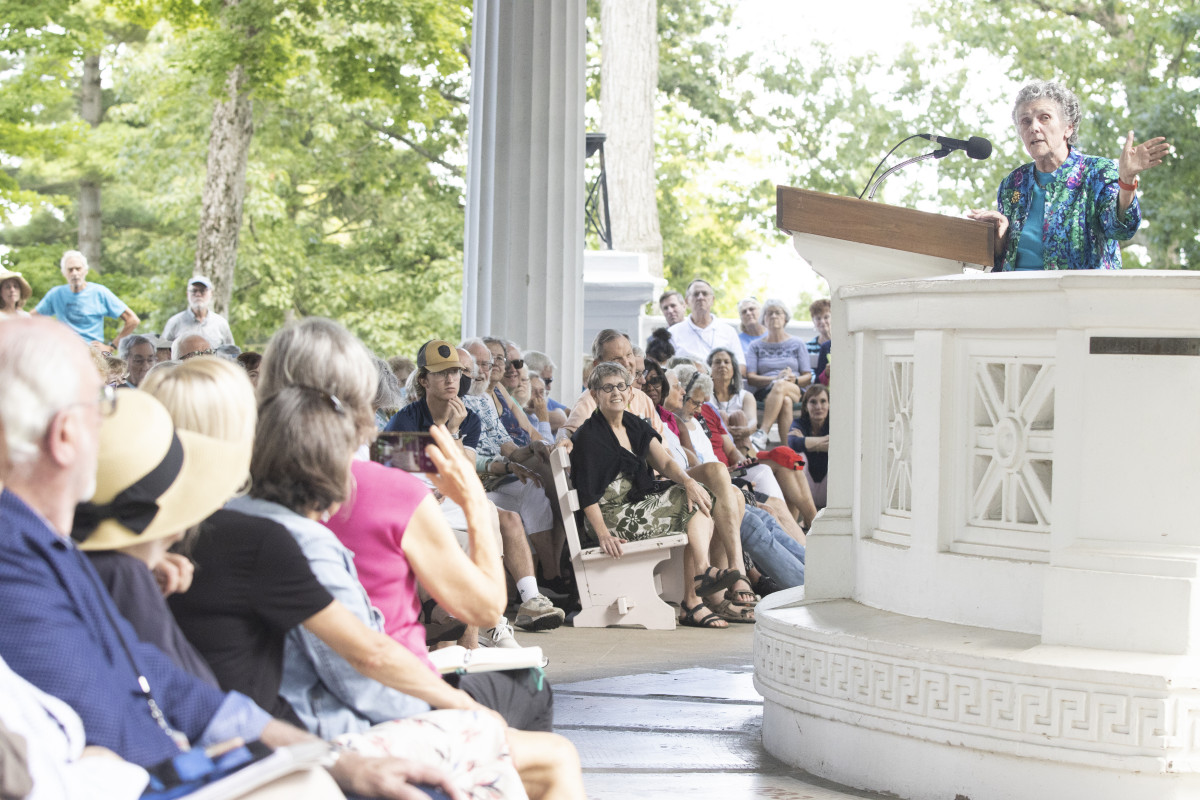 The world is filled with challenges, obstacles and problems that could lead to the demise of humanity. Yet, instead of rising up against the forces that contribute to the suffering of the Earth and humanity, people are wilting under the pressure and falling silent.

Sr. Joan Chittister, OSB, a Benedictine Sister of Erie, Pennsylvania, international lecturer and award-winning author of over 40 books, visited Chautauqua to deliver her message of fighting with courage by living a true prophetic life.

Closing Week Eight’s Interfaith Lecture Series of “New Profiles in Courage,” Chittister delivered her lecture, titled “The Time is Now,” on Friday, Aug. 19 in the Hall of Philosophy.

“I was with you last week. I got called before Salman Rushdie was off the stage. I cried with you then, too,” Chittister said. “… So I want to talk to you today about the Judeo-Christian place in a violent world.”

Chittister discussed what will save humanity amid its decline into the void of violence. She believes the changes people often avoid end up coming back to bring trouble and doom. Rather than retreating from change, people must learn to embrace and confront it head-on through spiritual renewal and social reform.

Capitalism leaves most Americans poor and many unable to access basic human necessities, and this is not a natural or just way of life.

“No matter how hard we try, there are forces out there that are working consciously against life-saving cultural change … for the sake of personal profit. And the casual dismissal … for the care of the Earth (is) for the sake of money,” Chittister said. “Under it all lies the increasing concentration of politicians to secure their seats for years, rather than secure the future of the country now.”

Beyond this, Chittister argued that politics have become a battleground of insults and ignominy. She has come to the realization that it’s not about what humanity knows, but what they do to leave the path of destruction that it is speeding along.

Important Judeo-Christian ideals have been abandoned, Chittister said, as people only see Jesus as Jesus the Healer, which is only half of the story. As people look to feel pure and righteous, the model of Jesus the Prophet is often ignored.

“(Jesus the Prophet) is the Jesus who spoke justice, as well as mercy,” Chittister said. “… We live in a largely Judeo-Christian culture that accepts half of what it means … to follow Jesus. … The half that makes us feel so upright, so satisfied with ourselves.”

Rather than looking to Jesus to bring healing, people must stand up against injustice as they follow His path. It is Chittister’s belief that humanity has “ignored prophetic spirituality totally.”

Instead, people are taught to be nice, yet being kind is not the same as being good. Sometimes, being nice can equate to not speaking up in fear of being brash or rude, and this leaves the truth hidden, Chittister said; unasked questions are left unanswered, particularly in the church.

“Now we have seen (the church) being more intent on hiding church scandals of sexual abuse than being willing to explore new theological questions, … surely all of which would stir the hearts of the church rather than cement it in the past,” Chittister said.

Pointing out the issues of the church, ranging from homophobia, sexism and protection of pedophile clerics, Chittister said too often Christians do not speak out on these issues.

“I have heard too many Christians, of multiple denominations, go silent in the face of this moral, ecclesiastical, governmental and social collapse around us,” Chittister said. “While their churches are nice to nice people, (they are) never really good in being outspoken for the speechless in a world with no words for them.”

Chittister believes the choices people make now will not only affect the future of the church or America, but also the world at large and its inhabitability. While people tend to find a way to push off their own accountability to solve these problems, Chittister warns that pushing these issues will not stop them from existing, but rather prolong their damage.

People also tend to accept their defeat and become even quieter than the deafening, roaring silence.

“This second choice is a decision to crawl into a comfortable cave with nice people and become a church, a culture, a society within a society, but without a soul,” Chittister said.

While CEOs’ wages have increased 940% between 1978 and 2018, employee wages have only increased 12% during the same time period. Yet, no one seems to be up in arms about this drastic inequality.

“It is a population of serfs left adrift in a declining democracy,” Chittister said. “… Do we realize that every single time we allow another minimum wage to go by instead of a living wage, and we never speak out for our neighbors or the people on the other side of the hill, that we too are part of the violence because we’re supporting the violence?”

Religion has taught people that all they need to do is work harder, but this allows for the dismissal of those who are suffering by believing they aren’t working as hard.

Straddling the line between universal compassion and national self-centeredness, humanity must put in the work to flip the script. The world is waiting for voices to stand up and bring back spiritual sanity.

The biblical prophets are just like all humans, as Chittister explained they had their own businesses, families and lives. They too used any argument they could find to sit back and deny the call of action. While these prophets are now gone, the only people left to undo this damage are everyday people.

“Now there’s only you and I who can bring God’s will to these things in the here and now, to warn this world of the poisoning of the land and the pollution of the water and the sinful disinterest of the powerless ones, the ones that we leave behind in nothingness,” Chittister said.

To be a prophet, people need to look out for those who society has forgotten, and they must speak out against the conditions that allow the suffering of the forgotten.

“I don’t mean to sound as if it’s easy. It’s not,” Chittister said. “Withdrawal in the name of religion is so much easier than participating in the public confession of conscience. … The fact is that life without the prophetic spirit in you, will come in this country to be lifelessness without a name.”

Rather than relying on others’ beliefs, Chittister encourages people to speak on their own ideas without fear of being unqualified; everyone has a voice that deserves to be heard.

“The prophet’s willingness to broach topics that institutions do not want to hear is the mark of an honest society. The prophet unmasks what is already here but smoldering,” Chittister said. “And the fact is … what we let go, never goes by. It’s there, and it will work against you.”

Throughout history, “simple people” have reshaped the world through speaking up. But until one’s heart is changed, nothing will be changed. The intentions of true, positive change must hold up, or things will continue to stay as they are.

But prophets do not aim to be successful in their own right. Rather, as Chittister explained, their goals are to make life better without quitting when the going gets tough. They must sustain themselves and their goals.

Providing four tips on how to be a profound prophet, Chittister first said one must have a serious spiritual life. This does not mean one must go to church every Sunday, but instead, must speak the truth of their hearts

“Second, the prophet must understand that we are just simply links in the global chain of God’s will for the world,” Chittister said. “We’re not expecting to win, but we are committed to try.”

Cultivating deep prophetic relationships with people that can support them and their mission is Chittister’s third tip, as a prophetic life is filled with challenges.

“The real prophet needs the time and the distance to live a distinctly other, separate life of love and laughter that is not full of politics and frustration,” she said. “… What you have to do is see that there is a part of your life that you don’t let slip, that you follow the prophetic word (while) you bring joy and good life.”

Lastly, Chittister said a prophet must risk rejection and ridicule as they answer the uncommon, courageous call to raise difficult questions and new ideas.

“If they stand their ground long enough, they will become the brave and the bold (and) take us beyond yesterday to the horizon,” Chittister said.

Old answers will not save humanity. Instead, people must think toward the development of the future. Time will change nothing, but people’s opinions and voices will.

“The prophets of religion must go on raising their cry to welcome the unfettered exploration of the human mind that will lead to the opening of the human soul to the will of God everywhere,” Chittister said. “… To all of you, who do not realize who you are, you are the prophets of our time. … You are the only sound of the voice of God that anybody might hear. … So speak truth. Please speak justice. Please speak life.”

In the world we are kingdom builders, partners with God, Rev. Natalie Hanson preaches