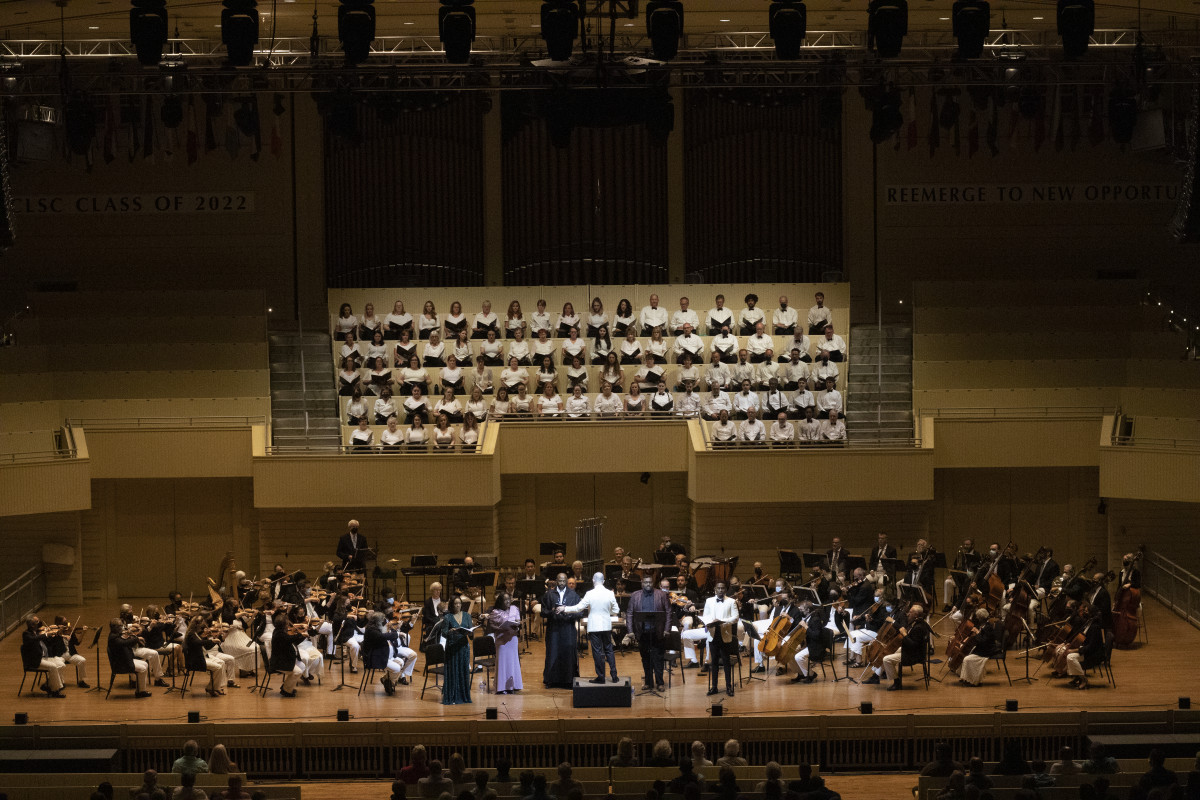 Orchestral programming doesn’t get much better than what the Chautauqua Symphony Orchestra presented Thursday night at the Amphitheater. Nor could anyone have asked for finer performances. On its own, Paul Moravec’s 2017 operatic oratorio Sanctuary Road would have made a profound impression. Paired with Brahms’ “Schicksalslied,” however, it and the evening as a whole hit home with a power beyond the norm.

To be clear, Sanctuary Road could have stood on its own. An hour-long work for orchestra, chorus and vocal soloists based on the writings of the Underground Railroad conductor William Still, it was a complete experience that needed no complement, explanation or occasion.

Much of the credit, of course, goes to Moravec. His music Thursday proved readily listenable and often profoundly moving. In Sanctuary Road, commissioned by the Oratorio Society of New York, he wields orchestral, individual vocal and choral forces deftly, weaving together and infusing with drama five soloists and chorus as effectively as the masters of Italian opera.

But the impact of the CSO Music Director Rossen Milanov, the Buffalo Philharmonic Chorus (directed by Adam Luebke), and the guest soloists cannot be overstated. That Sanctuary Road is a work of special import to them was clear in a performance marked by tremendous passion and care. It came as no surprise that two soloists, soprano Laquita Mitchell and baritone Malcolm J. Merriweather, hail from a recording of the work.

One thing that would have helped: supertitles. English is notoriously difficult to follow when sung, and the result Thursday was that much of Still’s fervent, poignant writing, lyricized by librettist Mark Campbell, simply couldn’t be heard. This listener picked up maybe half.

Thankfully, one got the gist. A narrator served as Still himself, relaying what he learned from various travelers and conveying the urgency he felt to save lives and words. The others, meanwhile, portrayed other real-life figures, singing of grueling experiences and feelings. Through soaring, vital songs of struggle, fear, anguish and longing, Moravec captured a sliver of what it must have been like to travel the railroad and how Still felt as a steward and living historian.

Although Mitchell and Merriweather recorded Sanctuary Road, they stood out Thursday only as members of a perfectly blended, incredibly eloquent band of soloists that included mezzo-soprano Melody Wilson, tenor Joshua Stewart, and baritone Richard L. Hodges (in lieu of bass-baritone Dashon Burton). They also stood before a chorus and orchestra that were each perfect in their own respects: articulate, unified and vividly expressive.

Featuring Sanctuary Road during Chautauqua’s 2022 season was smart. Pairing it with “Schicksalslied” (“Song of Destiny”) was a stroke of genius. To an oratorio about the Underground Railroad, there could have been no more apt partner than a choral song hailing earthly redemption.

In this, the program’s opener, the Buffalo Philharmonic Chorus made a brilliant first impression. Milanov and the CSO supplied supple, nuanced support and the large band of singers in the balcony capitalized on it fully, carrying listeners along a wide emotional spectrum from dread to bliss, from a feared unknown to a place of comfort and serenity represented by warm, softly glowing sound.

It was a beautiful performance, one made all the more beautiful moments later by the hope that Still and his hundreds of travelers reached just such a place themselves.