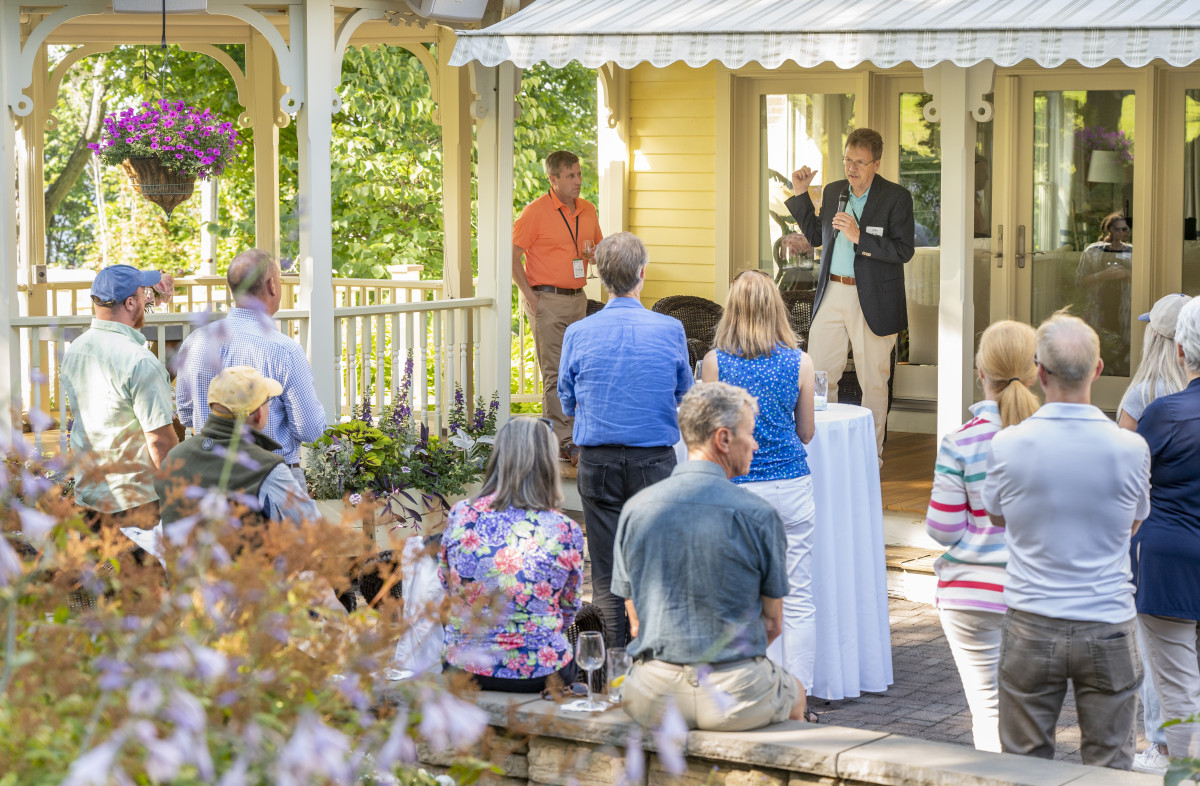 The Jefferson Project, through a collaboration with the Rensselaer Polytechnic Institute, IBM Research and the Lake George Association, was established in summer 2013 to analyze harmful algal blooms that threatened the health of Warren County’s Lake George. In 2020, the project coalesced with the Chautauqua Lake and Watershed Management Alliance to study the health of Chautauqua Lake, affected by the same harmful algal blooms in Lake George.

To further this effort, vertical profile sensors were placed in Chautauqua Lake earlier this summer to measure the lake’s pH, temperature and nutrient levels, all which contribute to lake health. The boat tour last Thursday allowed for a look at these sensors.

“I want to thank our captains of our boats and our boat owners for taking us out on the water to take a look at the vertical profilers,” said Chautauqua Institution President Michael E. Hill. “I want to particularly thank John Kelly for coming on spending a couple of days.”

“When we came out here, not only was this lake more interesting, but the partnership, the outreach was totally different than what we experienced at Skaneateles (Lake),” Kelly said. “I should just also add that we recently, as part of the Lake George efforts, benchmarked the science in all fresh bodies globally — and all of the science and instrumentation … (is) very fragmented. Nobody has what we have.”

The conversation then shifted to how the work is done and how measurements are taken. Kelly described this research as being the three legs of a stool.

“There’s three legs to our stool of what we do and I only talk about one, instrumentation, collecting data; there’s another leg of the stool, which is lab science,” Kelly said.

They collect hundreds of samples a day and run a full genome profile on them to help understand what exactly is in the lake and what causes its growth, Kelly said.

“The third leg of the stool is this modeling, which is very detailed, high-performance computer models,” Kelly said. “… We can do almost anything inside a big enough computer, very accurately. We take the data from these sensors and then we plug it into a computer model. … We only have a sensor here and a sensor down there. … Those anchor points give us enough for the computer model to figure out what’s going on in every place in between those two sensors.”

Kelly, who worked on Lake George with The Jefferson Project, used his experience to explain the process on Chautauqua Lake. Through the use of similar technology, they found that Lake George was experiencing high levels of salt due to the distribution of road salt in the winter. With this information, the local government was able to take action to prevent further damage to Lake George.

“We ran our computer models and showed that if we cut the input of salt runoff into the lake, in about seven years, Lake George will start to return to pretty close to where it was naturally,” Kelly said. “We said ‘cut that salt,’ and good things are going to happen.”

The Jefferson Project hopes that with “science, education, action,” the community will be engaged. Then, “we just stand back and measure the result,” Kelly said.

Kelly shared what he thinks could happen at Chautauqua Lake in the next five years.

“The very first thing we have to do is get a good baseline. What’s the state of the lake and how does the lake behave? Where does the water move? What’s currently triggering these things? And then, run the projections,” Kelly said. “The second thing we’re doing is we’re going to be deploying really advanced, first-of-their-kind phosphorus sensors.”

Kelly said that from research on other lakes it has become clear that phosphorus encourages the growth of the bacteria species affecting Chautauqua Lake.

With all of the data collected from the sensors, The Jefferson Project can begin working on what Kelly called “no-regret actions”

“Ideally, you’d like to do the science first and then take action. But I firmly believe that we don’t have all the time in the world,” Kelly said. “We’re trying to identify no-regret actions. So in Lake George (even before we had specific data), we knew it was the right thing to cut the road salt.”

Beyond relieving the threats against Chautauqua Lake, Hill believes this partnership with The Jefferson Project will allow Chautauqua to become a convening place for freshwater science.

“The exciting part of our partnership is not only that we fix this lake, that we reverse trends, but that the Institution becomes a convening place for all sorts of municipalities and government entities that want to fix their waterways,” Hill said. “… We think that the combination of what Chautauqua does in convening, and the science that The Jefferson Project can bring, makes us a really powerful and potent set of partners to make this an epicenter of science around freshwater.”