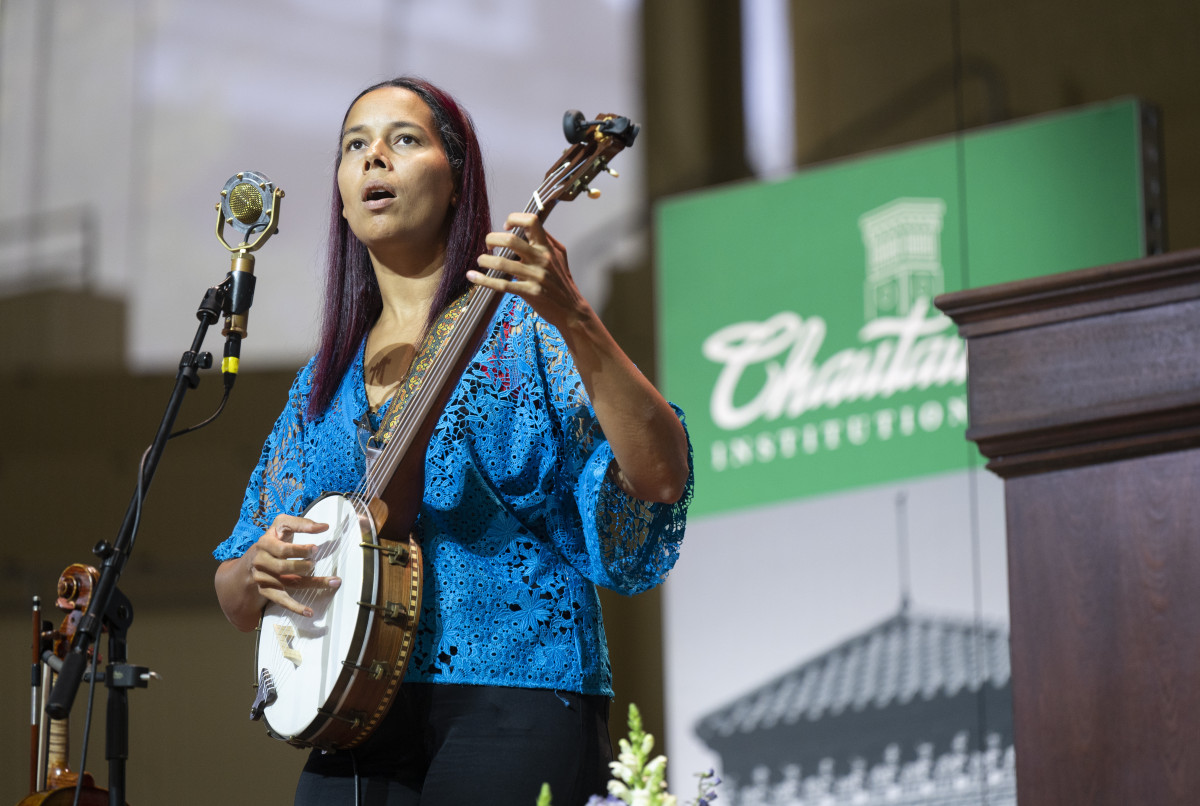 Grammy Award-winning musician Rhiannon Giddens digs into American music and its entanglement with all of America’s history. One can’t talk about the banjo, one of her historical and also musical loves, she said, without talking about slavery.

Giddens presented to her audience a slave advertisement posted in Ulster County, New York, in 1797 that truly affected her. The advertisement listed a “negro wench” for sale, about 22 years old, and read:

“She has a child about 9 months old, which will be at the purchaser’s option.”

“So people ask me, how do I deal with this stuff?” Giddens said. “This is what I see. I write songs.”

Giddens then played her song “At the Purchaser’s Option,” off her 2017 album Freedom Highway. Her voice flooded the Amphitheater:

Giddens’ lecture was titled “The Banjo is from Appalachia: How the Creation of Musical Myths Damages Our Perception of Our True Past.” She opened Week Nine, themed “A Vibrant Tapestry: Exploring Creativity, Cultures and Faith with Smithsonian Folklife Festival,” at 10:45 a.m. Monday, Aug. 22 in the Amp.

Drawing on the work of historians and scholars who interrogate what it means to be an American, Giddens transforms that complex history into her folk music. She is interested in unearthing the forgotten, the erased, the misunderstood in U.S. history in order to contribute to a richer and fuller portrait.

“What I’ve discovered is that American music, particularly the banjo and all of its connective tissues, has been a really beautiful way to show some of the underlying issues and themes that have been mischaracterized over the last few centuries,” Giddens said.

Giddens gave an overview of the banjo in the popular cultural imagination — bluegrass, hillbillies, Steve Martin using the instrument for comedy, the damage done by “Deliverance.” These cultural phenomena have cemented the banjo in the collective American conception as a white instrument, but it originated in Africa. The akonting, a pre-banjo instrument, was the folk lute of the Jola people in West African nations such as Senegal and Gambia. Giddens shared a photo of herself learning to play the akonting on a trip to Gambia. Enslaved people being captured and brought to the Western hemisphere, particularly the Caribbean and South America, led to the creation of the banjo, she said.

Giddens emphasized the need to resist monolithic imaginings of whiteness, of Blackness, of Africa. Africa is a vast continent, home to countless cultures and languages, and yet for the captives huddled on ships, developing a community was a matter of survival.

“What you’re trying to do is, you have to create a culture that keeps you alive,” Giddens said. “And so there’s this creolization that begins as soon as people from different parts of Africa are put together on a boat to come over to the New World. So what happens is, people try to find these points of commonality before they’ve even engaged with the European world. They’re doing it amongst themselves.”

Displaying a folk art watercolor called “The Old Plantation,” attributed to South Carolina slaveholder John Rose, Giddens noted that the painting depicted a spiritual ritual with the banjo. The music, and its incorporation into religious practices, was an essential part of the survival Giddens referred. Those religious practices transformed into other cultural elements, such as the calinda, a pan-Caribbean dance. The music and dancing attracted the attention of white people.

“The banjo was always at the center of this,” Giddens said. “What was dangerous about this was that people started to notice that when you had Black people doing this, the white people around started going, ‘Hey, what’s that? They’re doing something that’s speaking to me there.’ And they would start to gather around, and people said, ‘Oh, no, no, no, no.’ These Black festivities can be tolerated, but when whites get involved, everyone needs to be careful.”

This intermingling of white and Black people, in which folks shared experiences and might realize their commonalities, was a threat to the status quo. Calinda and the banjo were banned in some places, a practice that contributed to the erasure of the banjo’s history.

“Why don’t we know this history? Because it’s dangerous,” Giddens said. “Because the more separate we are, the less we can compare notes. Because Blackness is not a monolith, right? It’s not a monolithic experience. Neither is whiteness. It’s all made up.”

Another aspect of erased history, which Giddens said is inseparable from the Black banjo, is the prevalence of Black fiddlers and string bands. These artists provided the music for Black and white social functions throughout America.

“You find that there’s an underlying thread of Black dance musicians that go everywhere in the United States,” Giddens said. “It’s not just the South. I can’t stress this enough.”

Giddens connected the misconceptions about Celtic music to those about Black music. Irish traditional music is part of a cultural exchange between the Emerald Isles and the rest of the United Kingdom. While the narrative of history claims that Southern fiddling is descended from Irish traditions, in fact, those practices were happening simultaneously, in different locations. Regarding the non-monolithic nature of whiteness, Giddens pointed out that the Irish Catholic immigrants who fled to the United States during the 19th-century potato famine were not considered white by Americans. She said that cultural exchange, musical and otherwise, occurred between Black and Irish populations.

Giddens also pushed back on the very concept of an ancient tradition.

“It’s all about who’s controlling the narrative, and why are they doing it,” she said. “What are they gaining out of it? Just like nationalism is always dangerous, because all the good stuff happens in the margins. That’s where all of our beauty comes from, is where we interact with each other. So instead of focusing on that, people focus on how we’re different in order to control people.”

White people did not play the banjo until the 1800s. They brought in their own folk traditions and influences, and blackface minstrelsy emerged. Giddens said that we have to talk about that practice, as she believes we have not fully engaged with it as a society. It was the most popular form of entertainment for decades.

“You can’t talk about minstrelsy without talking about the music,” Giddens said. “That’s what I focus on, is the music that went into it. The music is really all of the results of this cross-cultural collaboration between all people who are coming in. This is where you really see a lot of Irish and Black people interacting on the riverways, in the cities, countless interactions by musicians meeting and creating a new musical language that is uniquely American.”

Giddens plays a replica of a minstrel banjo from 1858, and uses it to write songs about American stories. To her, it sounds like American music.

“You hear the jigs, you hear three against two, you hear all of these proto-American aspects in that music,” Giddens said. “That’s why I’ve been digging into it, because when you talk about minstrelsy, you can’t just talk about the horribleness of it. Because it was horrible. It was mockery of Black people. It was. But there’s a lot of stuff underneath that.”

“There’s this idea of mockery, but there’s also this idea of admiration,” she said. “And I want to take that. It’s at the center of so many American cultural interactions, whether we know it or not.”

The entire English-speaking world was enraptured by minstrel music, and it gave rise to classics such as “Oh! Susanna” and “Dixie.” Giddens pointed out that Black people performed blackface minstrelsy as well.

“It happened because Black people, if they wanted to entertain, had to enter into minstrelsy because that was the only way,” Giddens said. “So they learned how to use blackface minstrelsy, subvert it, get paid.”

Jewish people, who, like the Irish, have been historically excluded from whiteness, also forged connections with Black musicians. Giddens noted that in the 1920s, there was a proliferation of Jewish songwriters creating music for Black performers, specifically for the jazz and blues genres. In the musical As Thousands Cheer, Ethel Waters was the first Black woman to get equal billing with white performers on a Broadway stage. She sang “Supper Time,” a song about lynching by Jewish writer Irving Berlin.

Other examples of songs written by Jewish artists for Black artists include “Strange Fruit,” which was drawn from a poem by Abel Meeropol and sung by Billie Holiday, and “Hound Dog,” written for Big Mama Thornton by Jerry Leiber and Mike Stoller. Giddens said Black music and Jewish music are interwoven in the DNA of American music, and that the persecution that those groups faced created a shared understanding. Waters also famously sang the Jewish song “Eli, Eli.”

“(Waters) said, ‘It moved me deeply and I always love to sing it. It tells the tragic history of the Jews as much as one song can. And that history of their age-old grief and despair is so similar to that of my own people that I felt I was telling the story of my own race, too,’ ” Giddens said.

Yet like every aspect of historical and cultural conversation, the kinship between Jewish and Black creatives was complicated. Power differentials existed between Jewish managers and producers and Black performers.

“But there was an honest, honest cultural exchange and admiration and connection that I don’t think we talk about nearly enough,” Giddens said. “Because it is at the heart also of what’s going on with the creation of some of our most American genres like blues and jazz.”

The birth of the recording industry was a significant instance of the erasure of musical history. American musical genres were created with an oversimplified understanding of consumers in order to sell record players and albums. Despite the public’s expansive tastes, executives like Ralph Peers, who famously bragged about coining “hillbilly records” and “race records,” were invested in putting music in boxes in the name of profit.

Figures like Henry Ford, whose racist and anti-Semitic views led him to decry jazz and blues as “jungle music,” and British musicologist Cecil Sharp, who hated Black people and specifically sought out white folk artists to record, contributed to the mythology of American music. What people in positions of power chose to record is what is remembered.

“This is how we see how folk music has been influenced by people’s blinders and blinkers and racist thoughts,” Giddens said. “Each one of these is really a topic on its own, but it’s just to give an idea of the stuff that has yet to be talked about when we talk about American music.”

The power of media representations is undeniable. Giddens, who formed the band Our Native Daughters, with three other Black female banjo players, said that people of color have told her she inspired them to play the banjo. They previously thought the instrument wasn’t for them.

“We can’t talk about the whole history of the country without talking about all of these aspects and realizing that it’s actually much more complicated than we think, and that’s actually where the beauty is,” Giddens said.