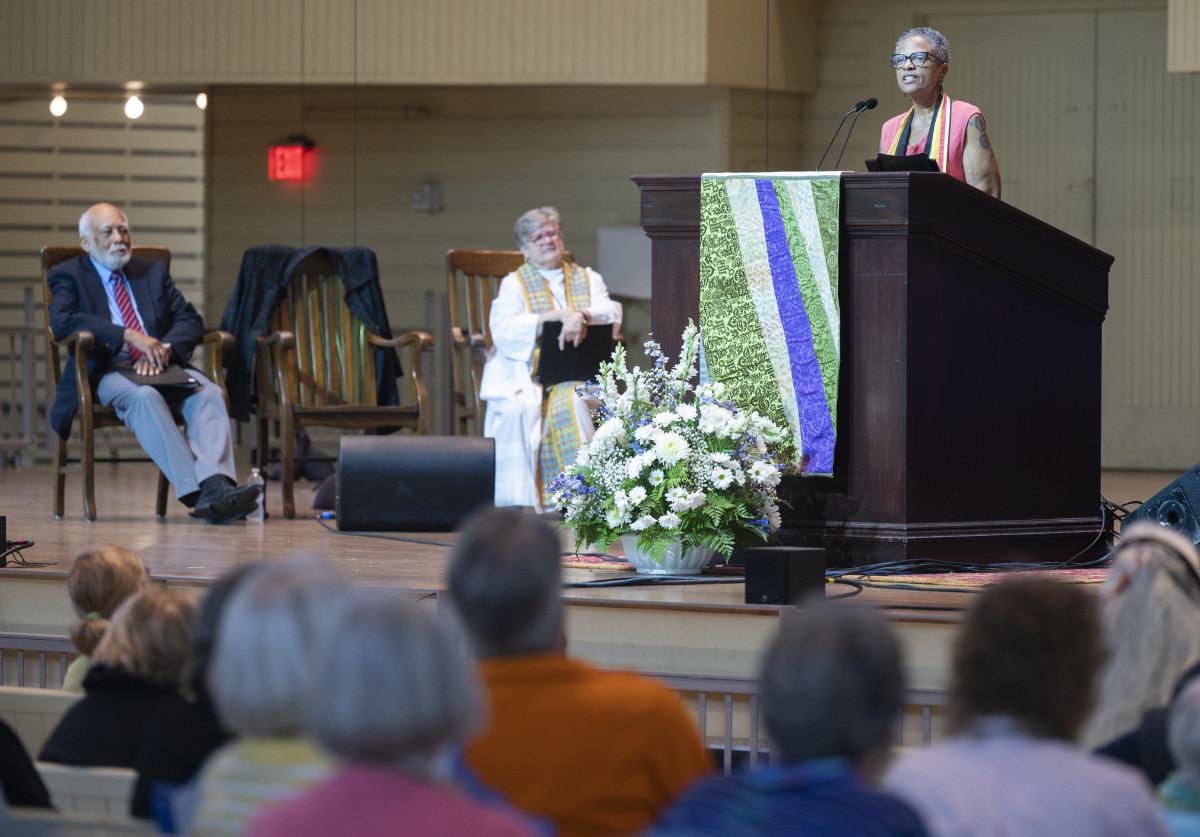 Elijah saw the rain coming. The Rev. Yvette A. Flunder admonished the Amphitheater crowd at the Monday, Aug. 22 morning worship service that rain is coming, figuratively, and to follow Elijah’s example by preparing.

“We are in a justice drought, but it serves a purpose,” said Flunder, presiding bishop of Fellowship of Affirming Ministries, a multi-denominational coalition of more than 100 primarily African American Christian leaders.

“Our purpose is to be a showcase of God’s glory, and trying to understand all this negativity and absence of fellowship and kinship.”

Flunder, the Week Nine chaplain-in-residence, engages in a ministry part gospel and part justice. She said her call to the ministry is to “blend proclamation, worship, service and advocacy on behalf of those most marginalized in church and in society.”

The morning scripture reading was from 1 Kings 18:41-45. Here, the Scripture is represented from the English Standard Version:

“And Elijah said to Ahab, ‘Go up, eat and drink, for there is a sound of the rushing of rain.’ So Ahab went up to eat and to drink. And Elijah went up to the top of Mount Carmel. And he bowed himself down on the earth and put his face between his knees. And he said to his servant, ‘Go up now, look toward the sea.’ And he went up and looked and said, ‘There is nothing.’ And he said, ‘Go again,’ seven times. And at the seventh time he said, ‘Behold, a little cloud like a man’s hand is rising from the sea.’ And he said, ‘Go up, say to Ahab, “Prepare your chariot and go down, lest the rain stop you.” ’ And in a little while the heavens grew black with clouds and wind, and there was a great rain. And Ahab rode and went to Jezreel.”

Flunder said her grandfather saw the rains coming, too, generations ago.

Her grandfather came to California from the South because opportunity existed in California. He got a job working on the Southern Pacific Railroad as a cook, and was among very few African American workers. When World War II broke out, suddenly there was a boom in the shipping industry, with many other African American workers clamoring to join the West Coast ranks. “The diaspora was incredible,” Flunder said.

She reflected on some people’s ability to anticipate an event before it fully develops.

“I think of people who are called to work, called to do something before everyone catches on,” Flunder said. “Grandpa came before the diaspora. Noah built the ark before the rain.”

“It begs the question: Can we see the hand of God before it becomes clearly clear to everyone else?” Flunder asked, answering her own question in the affirmative. “That’s what we call prophetic vision.”

Flunder segued to the recent climate of justice in America, referencing congressional threats to voting access and the Supreme Court’s recent overturning of Roe v. Wade. The court, she said, is “speaking into the lives of women about what we must do with our bodies.” She also spoke of verbal threats to same-sex marriage made by Justice Clarence Thomas.

She said many leaders of the Southern Baptist convention support the Supreme Court’s abortion stance even as they are embroiled in sexual abuse controversy.

“Several of the most influential people are the ones responsible for delayed reporting,” she said. “Southern Baptists, clean up your own houses.”

“This story about Elijah works for me,” Flunder said. “The reason he was a prophet was because he could see things before they existed. He said ‘It’s going to rain,’ even though others were quick to point out they were in the midst of a drought.”

Flunder recognized that sometimes such prophets become unsure of themselves.

“Then Elijah wondered if he was right, questioned himself. He went out to look at the sky. His servant looked for rain clouds: no clouds. Then again the next day. The same: no rain clouds still,” Flunder said.

“That’s where we are right now. We’re in ‘go look,’ ” Flunder said. “I encourage you to go look. It doesn’t mean just peruse the sky. It means look with informed anticipation. We should look to see the rain cloud, no matter how small it may be today.”

She referenced the “justice drought.”

“We don’t have to see it to know our God is faithful. Sometimes we need a drought to move us from our lethargy,” she said. “We need our young people to know some of us are not filled with anti-religious religion. We need people to embrace inclusivity. We need some pissed off women. (Women) frustrated with people who don’t have our bodies telling us what to do with our bodies.”

She said liberal women should seek alliances with conservative women, who she said have similar predilections regarding the right to choose.

“Women conservatives do not want their wombs controlled,” Flunder said. “There are interesting connections. We need to wake up.”

She said there will not be a return to mid-20th century values.

“This is not going to ‘Leave it to Beaver.’ We are not going to go back to the years and times and places when so many of us were diminished, misused, maligned, and mistreated. It’s time to tell the truth and have a caption that says, ‘Hell no. We won’t go back.’ If we reach the point when we become a narrow-minded theocracy, we must break out,” she said.

Flunder urged the congregation to keep looking for the storm clouds.

“The rain is coming, my beloved. No matter how small the cloud may appear today. Keep watching. Keep looking. Keep preparing,” she said. “Let’s trust that justice will run down like water. Why? Because the mouth of God has spoken it.”

The Rev. Natalie Hanson, interim senior pastor for Chautauqua Institution, and co-host of the United Methodist Missionary Vacation Home, presided. John Jackson, associate pastor at Hurlbut Memorial Community United Methodist Church, read the Scripture lesson. The Motet Choir sang “O God, My Faithful God,” by Kevin Hildebrand. The choir was under the direction of Joshua Stafford, director of sacred music and the Jared Jacobsen Chair for the Organist, accompanied by Nicholas Stigall, organ scholar. The Prelude was “Open My Eyes, That I May See,” by Emma Lou Diemer, performed by Stafford. The Postlude was Allegretto, Op, 58, No. 3 by Robert Schumann, performed by Stafford. Support of this week’s services is provided by the Daney-Holden Chaplaincy Fund and the Marie Reid-Edward Spencer Babcox Memorial Fund. 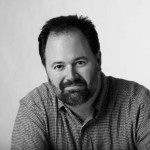