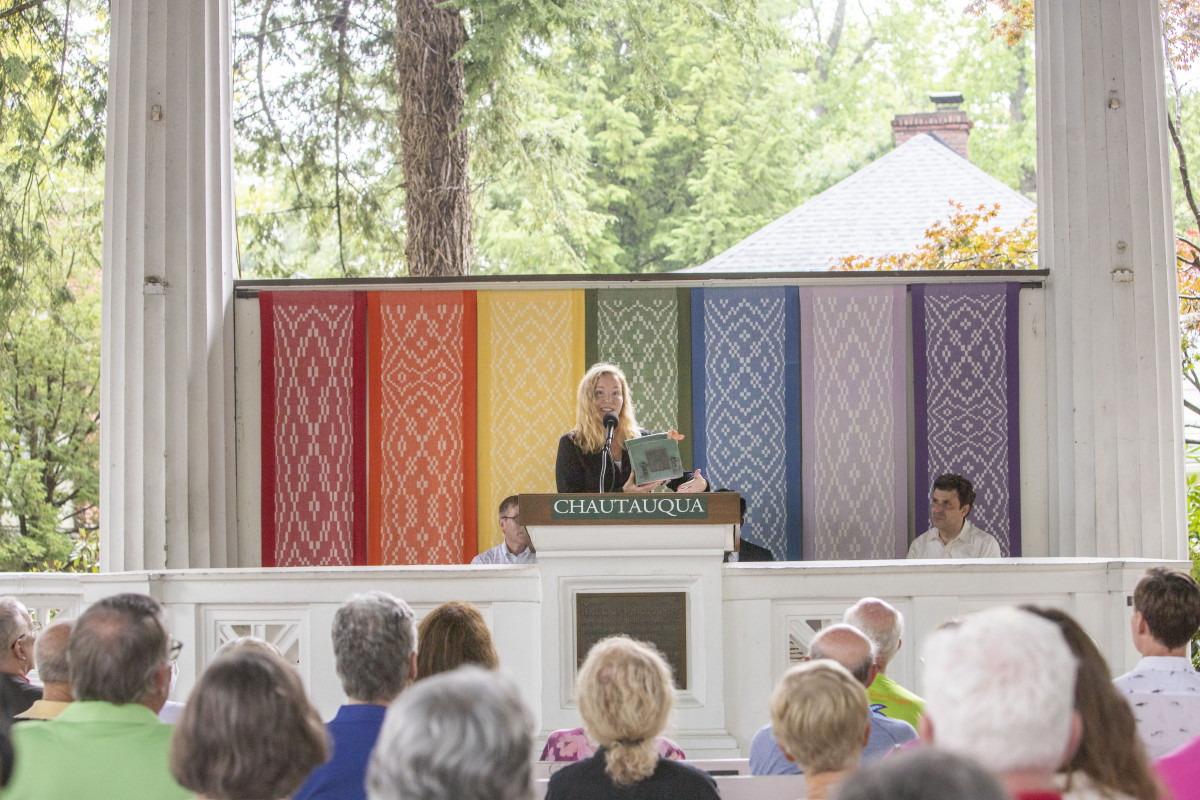 Rebecca Donner spent many years sequestered in her study, working on her book, All the Frequent Troubles of Our Days: The True Story of the American Woman at the Heart of the German Resistance to Hitler. When not in her study, she traveled the world to uncover the world of her book, which now brings her to Chautauqua.

“In researching this book, I traveled to archives in Germany and England and across the United States,” said Donner, a Canadian writer. “I worked with a Moscow-based historian. And yet, I had never been to Chautauqua.”

Donner, whose book All the Frequent Troubles of Our Days won the 2022 National Book Critics Circle Award for Biography and the PEN/Jacqueline Bograd Weld Award, is the winner of the 2022 Chautauqua Prize, the Institution’s flagship literary award for a work of fiction or literary nonfiction that honors an author for creating a richly rewarding reading experience, and a significant contribution to the literary arts. Donner she was honored and delighted to be at Chautauqua to receive her award in person — while the Prize has been awarded annually since 2012, she is the first winner to be honored in-person since 2019. The award itself, created by Jamestown artist Patricia Kramer, was crafted to resemble a sea foam green satchel with pink flowers emerging from the top, evoking the backpack of one of the book’s main characters.

“This place has such a rich history,” Donner said. “I recently learned that Susan B. Anthony delivered a stirring lecture in the Amphitheater here, advocating for the right of women to vote. Ten years later, my great-great-aunt Mildred Harnack was born.”

Last Friday in the Hall of Philosophy, Donner was awarded The Chautauqua Prize for All the Frequent Troubles of Our Days, a book centered around Harnack, who was herself a literary historian, author, translator and the only identified American who was in a leadership position in the German resistance against the Nazi regime.

“Mildred was deeply inspired by the suffragettes,” Donner said. “Her mother was a self-proclaimed suffragette. The courageousness that was exhibited by these women and others in the movement informed Mildred’s political activism when she moved to Germany to pursue a Ph.D., and she watched Germany progress from parliamentary democracy to fascist dictatorship.”

“But we know that’s not true, that she was ordinary,” Donner said. “There she was on the streets of Berlin in 1932. Anyone who knows anything about the history of the rise of fascism in Germany will know that 1932 was a tremendously significant year.”

At that time, Germany still had a constitution that guaranteed freedom of speech, freedom to demonstrate in public places and freedom of press.

“Mildred also saw the signs of a fragile democracy crumbling around her,” she said. “Walking to the University of Berlin, she saw long lines of beggars and campaign posters emblazoned with swastikas, and horrific acts of violence toward Jews.”

“They stood armed and ready to carry out orders issued by the Nazi party, which by all appearances was preparing for a violent right wing revolution in Germany,” she said. “Germany’s president, Paul von Hindenburg, was 84 years old, tottering into senility, in his second term as president. A politician half his age was growing in popularity, a high school dropout named Hitler, who promised to make Germany great again.”

Thus, the stage was set for Harnack’s incredible acts of bravery against the Nazi regime, Donner said.

Harnack and her husband, Arvid Harnack, helped pass out pamphlets and gather intelligence and, above all, helped Jews escape Germany.

“The power of this story is that it is true,” Donner said. “I’d like to conclude with Arvid’s letter to Mildred, which he wrote just a few hours before he was executed. He was hanged at  Plötzensee prison, in the same room where Mildred would later be guillotined. When he wrote this letter, he didn’t know about Hitler’s verdict, that Mildred had been ordered to die by guillotine.”

Arvid went to his death thinking that Mildred had only received six years in prison, Donner said.

“Imagine if you were in a cell, facing execution, imagine you knew how you would be executed — imagine what you would write to your spouse or loved one,” she said. “What is so amazing about this to me is that Arvid’s words tell us so much about him, about his character, and about Mildred’s commitment to the resistance.”

Donner paused — and then read the letter to the audience as thunder rumbled in the distance.

“My dear beloved heart, if in the last months I find the strength to be inwardly calm and composed, it is because I feel a strong attachment to all that is good and beautiful in the world,” Donner read. “It’s a feeling that sings out of the poet Whitman. Those that are close to me embody this feeling. Especially you.”