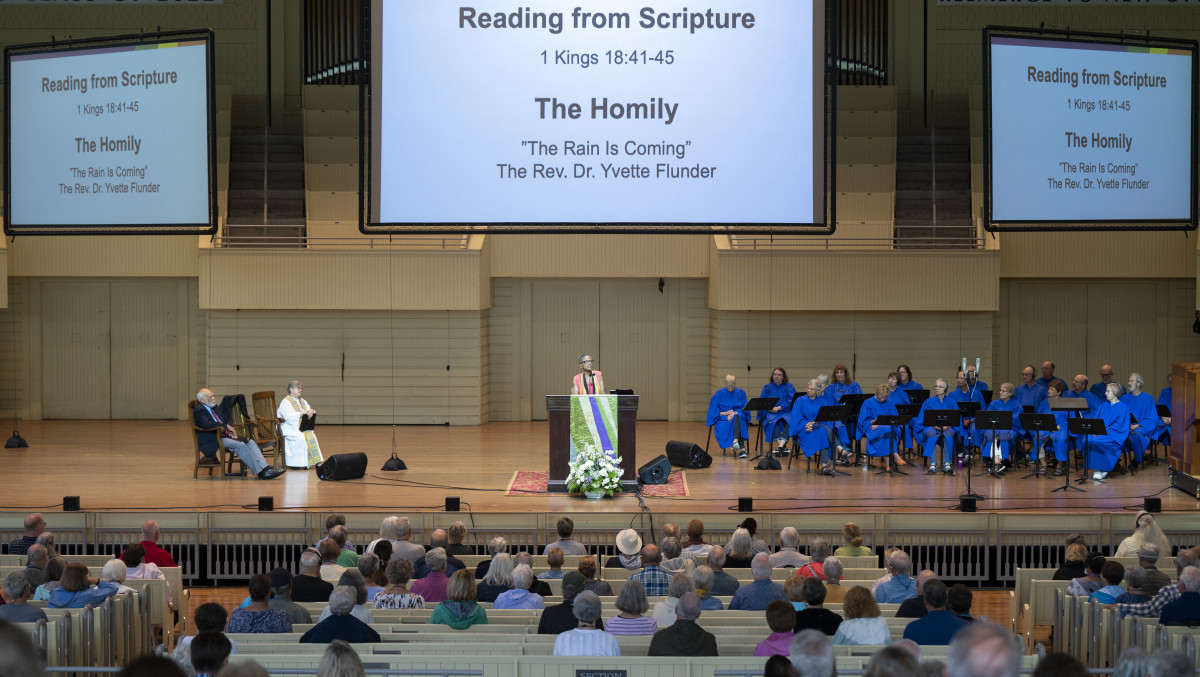 During her sermon at the 9:15 a.m. Thursday, Aug. 25 ecumenical worship service in the Amphitheater, the Rev. Yvette A. Flunder urged the gathered Chautauqua congregation to move beyond keeping the gifts God has given us to ourselves. Flunder is presiding bishop of The Fellowship of Affirming Ministries, founder of City of Refuge in the United Church of Christ, senior fellow at Auburn and Andover Newton Theological Seminaries, and an award-winning gospel music artist and author. She opened her sermon, titled “Resurrection or Resuscitation … It Is Time to Come to Life!,” with a reflection on the work of resurrection and resuscitation — the miracle of bringing back to life what is fully, truly dead; and the gift and labor of breathing life back into that which is not yet dead, but dying.

She went on to describe, in the language of the prophet Ezekiel, the dry bones in our culture, addressing dead myths, dead policies, dead prejudices and dead religion. She explored what might happen if those dead, dry bones were to be resuscitated.

“Bones so long there, they seemed unable to ever rise again,” Flunder said. “Yet there came a rattling sound in the valley. The sound of bone against bone, as dusty and dry bones, (that) were totally disinterested, by the way, in living again, found themselves disturbed everywhere. A righteous army was being resurrected from dead bones.”

Flunder called the congregation to a full recovery to spiritual truth, apart from religious law, noting that something is wrong and needs to be made right. She called this a time for people of faith to speak life to the justice-dying and justice-dead, and to speak with clarity and passion to the dry bones of our day.

She feels this is not rhetorical work, or the responsibility of only some, but the work of each person.

“We know how these systems are,” she said.

She charged the congregation to prophesy to the broken bones around one’s individual life.

“If we don’t, they won’t believe that life is possible!” Flunder said. “Imagine if you have that power and don’t use it! Why wouldn’t you speak to the dry bones?”

Flunder was clear that the world needs the word of a prophet, not to proselytize but to share, “until the decomposed are recomposed,” she said.

She noted that there are signs of rattling bones when a person calls back, asks for a book recommendation, or invites us to go with them on their journey.

Referencing the life and courage of the Biblical Daniel, Flunder also reminded the gathered congregation that love is a choice, and that we can all “choose to bring life to the times we are in.”

She closed her sermon with a reference to her Pentecostal identity and her vision of a true Pentecost wind.

Flunder concluded by encouraging everyone toward the work of prophetic Pentecost speech, “speaking in tongues that make the unfathomable love of God known to everyone,” she said.

The Rev. Natalie Hanson, interim senior pastor for Chautauqua, presided. Melissa Spas, vice president of the Department of Religion, read the Scripture lesson. The Motet Choir sang “Jesus Christ the Apple Tree,” by Elizabeth Poston. The choir was under the direction of Joshua Stafford, director of sacred music and Jared Jacobsen Chair for the Organist, and was accompanied by Nicholas Stigall, organ scholar. Stafford played “Fanfare,’’ by John Cook. Support for this week’s services is provided by the Daney-Holden Chaplaincy Fund and the Marie Reid-Edward Spencer Babcox Memorial Fund.