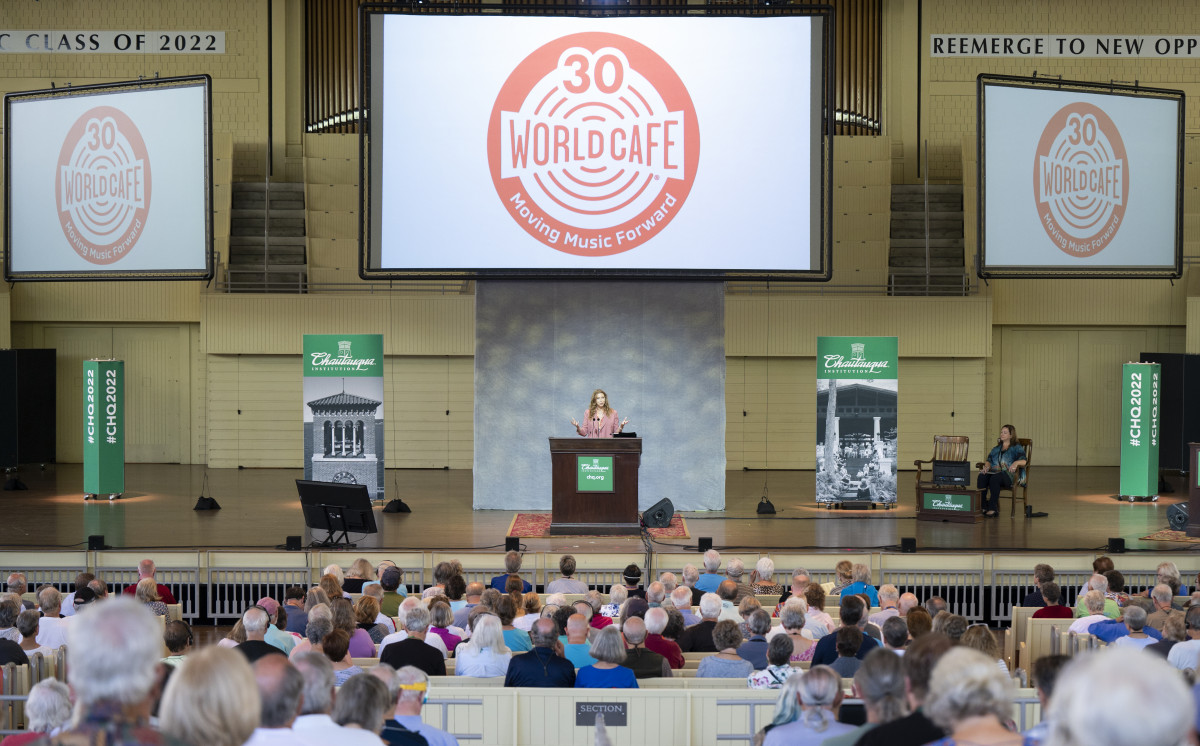 We can’t talk about the advent of technology that allows artists to distribute their own music and engage in genre-bending without talking about American rapper Lil Nas X.

Raina Douris, the host of NPR’s “World Cafe,” a radio program devoted to musical discovery and thoughtful conversation, played a clip of Lil Nas X’s viral smash hit “Old Town Road” during her Week Nine morning lecture. The song appeared on Billboard’s Hot 100, its hip-hop chart and then its country chart. It was subsequently removed from the country chart because it was decided that it did not sufficiently meet the criteria for the country genre.

The image of Lil Nas X’s grinning face under a cowboy hat was projected on the screen and his country-hip-hop tune echoed through the Amphitheater. The song’s defiant chorus reverberated: “Can’t nobody tell me nothing.”

“Billy Ray Cyrus, who appeared on a remix of ‘Old Town Road,’ noted that the discrimination Lil Nas X faced from the country music industry gave him the honor of joining a long line of country music outcasts,” Douris said.

“World Cafe,” originally hosted by David Dye, recently celebrated its 30th anniversary, and has been dedicated to highlighting the world of folk music, including emerging talents and off-the-beaten-path artists, since its inception.

Douris told a story about folk singer-songwriter Janis Ian, who, in the mid-1960s, was receiving death threats and having items thrown at her head because of a song she wrote.

The song, “Society’s Child,” which Douris played a clip of, was about an interracial relationship, and was banned from radios. When Ian came out as a lesbian in the 1990s, the powers that be in the entertainment industry tried to blacklist her.

“I bring up Janis because she’s an example of what storytelling and music, especially folk music, is capable of,” Douris said.

Music can document our times and act as a reflection and an archive of what’s going on in the world, in ways that push back against dominant narratives and reveal truths that challenge the status quo.

“World Cafe” began in a tiny walk-up studio with no sound-proofing in Philadelphia. Its format, which remains largely unchanged, involves longform, deep-dive interviews with artists and a wide range of music, from deep cuts off classic records to fresh, undiscovered singles.

The very first guest on “World Cafe” was Bruce Cockburn, whose song “If I Had a Rocket Launcher” charted in 1984.

Cockburn’s music blended folk singer-songwriter traditions with various global influences. In a clip from Dye’s interview with him, Cockburn said that the folks who initially made him want to play music were the likes of Elvis Presley, Buddy Holly and Chuck Berry, but in the course of his travels, he sought out and absorbed the styles of international cultures.

Douris said that the technological developments and the limitations of the COVID-19 pandemic have changed the musical landscape and how “World Cafe,” still based in Philadelphia, operates. Instead of lamenting the loss of the old ways, she values the opportunities these changes present.

Conducting interviews over Zoom allowed Douris to speak with Grammy winner Jon Batiste while he sat at his own piano at the Ed Sullivan Theater in New York City. She developed a show-and-tell segment where, from their homes, artists offered a window into their lives. She played a montage of clips — Jason Isbell displaying his Larry David portrait, Margo Price holding her baby, Billy Strings cradling a guitar made by his grandfather in the 1960s.

“We always like to say that radio is intimate, that we’re letting you in on these private conversations and you just happen to drop into them,” Douris said. “But in this context, speaking to them in their homes, from my home, it truly was intimate. Artists were unguarded. Sometimes they were a little bit stir crazy from lockdowns and social distancing. And the dynamic instantly changed.”

During lockdown, Douris got to interview Neil Young — one of her all-time favorite musicians. During the interview, Young received a phone call from his son, and he took it, having a whole conversation with him while on the Zoom session.

“There are not a lot of things that are more intimate and unguarded than seeing a man tell his son that he loves him on the phone,” Douris said.

Douris feels like we are in a rapidly changing world, a space between the familiar past and the unknown future that creates interesting opportunities. The fact that “World Cafe” is public radio also offers opportunities for creative programming unlimited by the demands of advertising.

“When we talk about emerging trends in music, and particularly folk music, that I noticed while hosting ‘World Cafe’ — what I’m really seeing is a shift in what stories we’re hearing and whose stories we are hearing,” Douris said.

As opposed to the highly segmented categories of other radio stations, “World Cafe” works in a format referred to as adult album alternative which covers a little bit of everything — singer-songwriters, indie rock, folk, Americana and more.

Douris pointed out that musical genre categories were constructed by the recording industry, motivated by commercial concerns. Those who wanted to sell music had to label it in order to do so.

Douris traced the dense history of American folk music, which developed from a combination of influences and traditions brought over by enslaved African and European settlers. Despite the divisions between these groups, they engaged in the exchange of culture, music and stories.

“Music let those stories integrate, even when the people weren’t allowed to,” Douris said.

The efforts of the recording industry to designate and segregate categories could not stop the cultural exchange, although they did determine who achieved mainstream success and who did not.

Douris noted Bob Dylan’s admiration of the Black folk artist Odetta, who inspired him to become a folk singer himself and from whom he borrowed melodies. Odetta released an album in which she covered Dylan’s catalog, but despite their mutual admiration and exchange of influences, one artist shot to superstardom while the other did not.

While the recording industry’s obsession with genre divided along racial lines has persisted, as with Billboard’s treatment of “Old Town Road,” the rise of streaming has shown that genre matters less and less to consumers.

“It turns out that the people actually listening to music, all of us, maybe never actually needed those genres as much as the music industry believed we did,” Douris said.

Furthermore, the accessibility and relative affordability of producing and distributing one’s own music is also eroding the power of music industry gatekeepers. These shifting trends and “World Cafe” ’s public radio status allows it to highlight new artists who are reinventing and reshaping genres.

“World Cafe” featured the Grammy Award-winning band Alabama Shakes before they had even released an album. The radio show had Sheryl Crow on in the early ‘90s when she only had one single to her name.

Douris played a clip of Vietnamese-American artist No-No Boy singing “Tell Hanoi I Love Her,” guitar in hand and cowboy hat perched on his head. The artist grew up in Tennessee, while his mother is from South Vietnam, and he incorporates every facet of his background into his music.

“When No-No Boy visited the show, we talked about how writing these folk songs is a way for him to educate, but also a way to establish the history of immigrants as American history,” Douris said. “Each immigrant to America brings their stories, and those stories become part of this rich and diverse American history. Folk music has always been the music of people, not just a specific few people. An artist like No-No Boy gives us a fuller, more complete picture of this country.”

Douris also spoke about the wave of Black artists entering the Americana space in recent years, including Rhiannon Giddens, who lectured at the Amp at 10:45 a.m. on Monday and performed with the Chautauqua Symphony Orchestra at 8:15 p.m. on Tuesday.

Earlier this year, “World Cafe” featured the Black Opry Revue, a collective of Black, Americana artists who created their own space in response to their ongoing marginalization in other musical spaces. Douris played a clip of their visit to the show, featuring Roberta Lea singing “Ghetto Country Streets.”

While “World Cafe” is not generally known for hip-hop, in June 2020, in the midst of the worldwide Black Lives Matter protests responding to the murder of George Floyd, Run The Jewels released a new album. The album, RTJ4, spoke to the modern experiences of being Black in America, and Douris saw the importance of inviting the group to the show. She said that RTJ4 falls under the umbrella of folk music.

“If we think about folk music as the music of the people, the music that tells our stories, the de facto definition of it as acoustic singer-songwriter music can start to feel outdated,” Douris said.

Folk music has always been a record of the time in which it is made, and Douris said that she hopes “World Cafe” serves as an archive of those records, and as a library of our stories.

Douris recounted a recent interview with British folk rocker and activist Billy Bragg, in which she asked him if he believed music can really change the world. She found his answer striking.

Douris concluded her lecture with a return to Janis Ian. Douris recently featured Ian on “World Cafe,” where she played a song called “Resist” from her latest album. The song is a searing critique of the ongoing policing and oppression of women and their bodies. In the year 2022, multiple radio stations told Ian they would not play “Resist” because it was too “suggestive.”

“ ‘World Cafe’ has tried to evolve to include those different voices and archive their experiences — our experiences,” Douris said. “In my opinion, if the story that you’re trying to tell is deemed too dangerous, too controversial or too suggestive by the powers that be, there’s a good chance it’s a story worth telling. That’s what folk music does.”