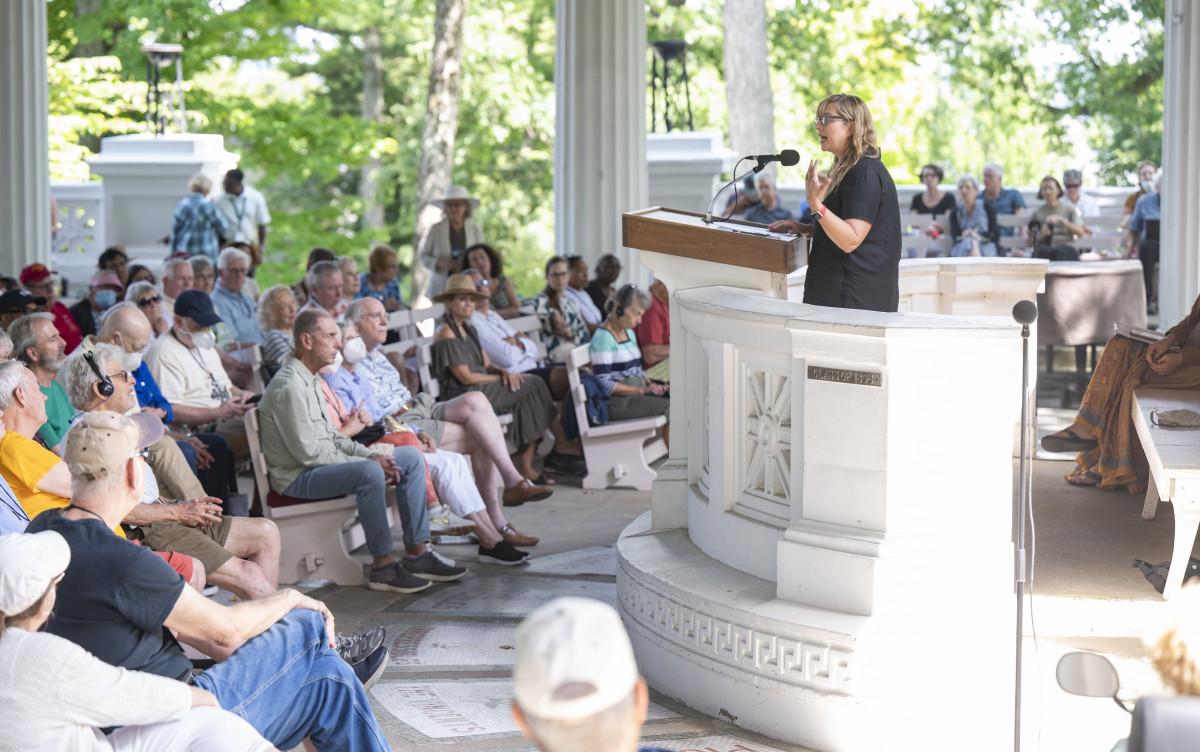 Laura Limonic began her lecture with a simple declaration: “Today,” she said, “I’m going to talk about Jews.”

“Specifically, Latino or Latinx Jewish immigrants in the United States,” said Limonic, an assistant professor of sociology at SUNY College at Old Westbury. “Before you wonder for too long, there are not that many of them. There’s about 180,000 to 200,000. It’s a tiny fraction of the Jewish population.”

Then again, Limonic said, American Jews themselves constitute a “tiny part” — about 1.9% — of the larger U.S. population.

“Nevertheless, I study them,” she said. “I am one of them. So if their numbers are so small, why do we study them? Why do we, as I did, write a whole book on them? In part, the reason is personal, and I’m going to talk a little bit about my background today. But I’m not a memoirist; I’m a sociologist.”

Limonic said that her studies in sociology revolve around how the social world is connected, how people find community and, ultimately, how culture is built and transmitted through race, ethnicity and religion.

At 2 p.m. Wednesday, Aug. 24 in the Hall of Philosophy, Limonic, author of Kugel and Frijoles: Latino Jews in the United States, continued the Chautauqua Interfaith Lecture Series Week Nine theme, “Faith and the Tapestry of the Future,” with her lecture, “Becoming Latinx Jews: An American Immigration Story.”

“Back to Latino Jews: What can the experiences of this group tell us about the social world?” she said. “In particular, what can they tell us about religion and ethnicity as building blocks for integration among immigrants, here in the United States?”

Limonic said she wanted to begin her lecture by telling a story about her family that she said “illustrates some of the topics I’d like to cover.”

“In 1980, Argentina was in the midst of a brutal dictatorship,” she said. “People were disappeared, thousands of people fled, people went into hiding and exile. My parents said, ‘Maybe this is a good time to leave. Let’s go to the U.S. It’ll be an adventure.’ Many decades later, here we are. They thought it would be an adventure for a few years, but alas, they liked it.”

When Limonic’s family arrived in Boston, none of them spoke English aside from a few choice phrases.

“We employed phrases like ‘I don’t understand,’ or ‘What a pity,’ ” she said. “But my dad used these phrases at every turn: at the grocery store, the pizza place, whenever someone turned up at the door. My father and mother spoke Hebrew and Yiddish fluently, had a few words of Italian and some Arabic, but zero English. Yet somehow, my dad was confident that he would make do.”

Limonic’s father enrolled in a master’s program in Jewish studies at Brandeis University, and had “naively assumed that his lack of English would be compensated by his Hebrew proficiency.”

“It was not,” she said. “It was not because unlike in Argentina, where learning and speaking Hebrew was akin to being a good Zionist, and in Argentine terms, a good Jew. This was not necessarily the case in the United States.”

What made someone a “good Jew” in Argentina just didn’t translate to the U.S., Limonic said.

“While my dad spoke and speaks Hebrew, many of his classmates didn’t,” she said. “He was also amiss in other key Jewish American areas: for example, the Kosher norms of brown bag lunches. On his first day of his internship, he brought his brown bag lunch. He had a little Diet Coke and a sandwich and a piece of fruit, and he was going to his internship.”

When he got there, Limonic said her dad realized he had brought a ham sandwich — something strictly prohibited by Kosher dietary restrictions.

“After someone called him out on this, he never brought ham again to the internship,” she said. “I tell these stories not only because they’re anecdotes into our lives as immigrants, but also because they point to the micro factors that, along with language, food, behavior, dress, accents, norms and values, defines culture.”

Latinx Jews bring with them a strong sense of cultural and communal Jewish life, and have “redefined what it means to be an American Jew,” Limonic said.

“I think Miami is the perfect example of this,” she said. “Latino Jews are American Jews now, particularly in places like Miami. And this is the story of immigration: to adapt, but to also change the place where you land. It is also the story of religious institutions and religious spaces, to serve as places for immigrants to find a sense of home, community and fellowship, while also allowing immigrants to influence religious life and community.”