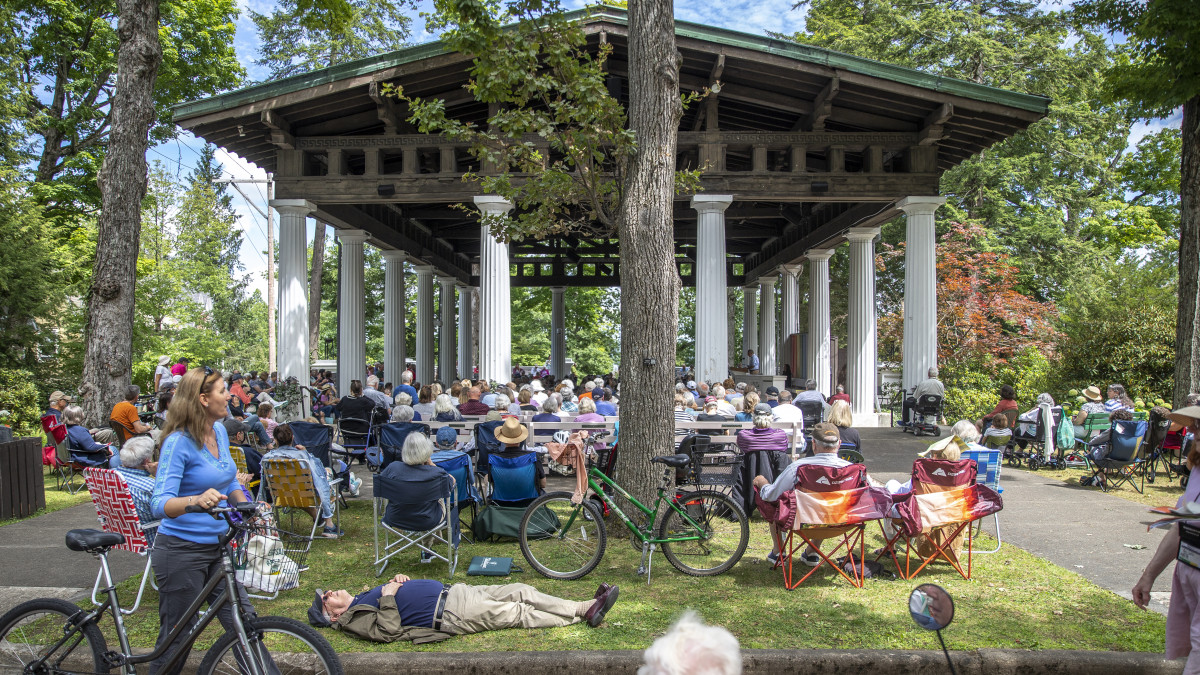 Often, those in positions of power and select historians are the few people chosen to record history for all of humanity. But David Isay, former radio producer and StoryCorps founder, believes history should be written by the masses.

Delivering his lecture, “StoryCorps: A Celebration of Human Thriving,” Isay spoke on Wednesday in the Hall of Philosophy about the nonprofit organization, and played recordings of everyday people telling their stories for Chautauquans.

Continuing Week Seven’s Interfaith Lecture Series theme of “Home: A Place for Human Thriving,” Isay’s lecture focused on how his organization brings people together through deep conversations. Isay, who has won six Peabodys for his work, shared StoryCorps’ mission: “preserve and share humanity’s stories in order to build connections between people and create a more just and compassionate world.”

Prior to founding StoryCorps 18 years ago, Isay found himself more interested in public service than entertaining people as a radio personality.

“The purpose of StoryCorps is for as many people as possible to be listened to, to be interviewed by a loved one,” Isay said, “… where you can bring anyone who you want to honor by listening to their story — a parent or grandparent or friend … and for 40 minutes you ask questions and you listen.”

After these interviews are recorded, the participants receive a copy and have an option to have their recording filed at the Library of Congress, ensuring it is a part of history.

“Essentially, because of what happens at the booth, I think what we’re doing is collecting the wisdom of humanity,” Isay said.

A small percentage of interviews are also selected to be broadcast on NPR and presented around the country at Isay’s talks.

“He used to talk about bottom-up history — history through our voices and our stories, as opposed to the top-down history we hear so often,” Isay said.

The first interview Isay presented to Chautauquans featured a fourth grader from Mississippi and his father. The father began to talk about what he was feeling when his son was first born.

“It was like looking at a blank canvas and just imagining what you wanted the painting to look like at the end, but also knowing you can’t control the paint strokes,” the father said. “You know, the fear was just bringing up a Black boy in Mississippi, which is a tough place to bring up kids, period.”

The father began to explain there were statistics that said Black boys born after the year 2002 have a one in three chance of going to prison. This is why the father brought his son to several civil rights protests — to show him what it looks like to bring people from all backgrounds together to create a better world.

Isay clicked play on the next recording, which featured another parent-child conversation, this one from Texas. This conversation was centered around a fifth grader’s experience with active shooter drills, and his mother’s reaction to his powerful bravery — which frightened her.

During one of the drills, the young boy helped his teacher move the desk in front of the door because it was difficult for her to move it on her own.

“The class is supposed to stand on the back wall, but I decided to stand in front of the class because I want to take the bullet and save my friends,” the boy said.

While the teacher did not ask him to stand in the front, the 10-year-old boy felt a calling to step forward as a young martyr. No matter how much the mother pleaded for her son to be selfish if that moment ever occurred, he was adamant that this was not her choice to make.

“Something about this makes me feel sad,” the boy said. “But you raised a good person.”

With the recent overruling of Roe v. Wade, Isay shared an interview from a woman who worked as a counselor at the Jackson Women’s Health Organization — the only abortion clinic left in Mississippi by 2004, and the clinic at the heart of Jackson Women’s Health Organization v. Dobbs. StoryCorps released the recording the day the clinic was forced to close in July following the Supreme Court’s Dobbs ruling. The interview with the counselor was recorded more than 10 years ago.

The counselor was influenced to work there after her own experience being pregnant at 16 and giving birth to a child as a teenager.

“(After finding out I was pregnant, my mom) sat me down in a chair to comb my hair, but she never combed my hair,” the woman said. “She couldn’t say it was OK, but a touch can mean so much sometimes. … She forgave me at that moment she touched me.”

While the counselor was able to raise her son while finishing high school and college, she wishes she had the option to choose her destiny. Her experience with her mother and raising her son allowed her to relate to several patients at the clinic she worked at.

“I try to reach that teenager to let them know that it’s going to be OK. And I’ll make sure I encourage the mom or the dad that’s with that teenager,” the woman said. “… Sometimes I can see the mother look over at the daughter, almost as if for the first time. It takes me back to that moment when my mom was doing my hair.”

Out of the 700,000 people who have participated in StoryCorps, Isay said everyone talks about love, their families, their homes and their childhoods, all relating to the themes of human existence.

Thinking of one of his own StoryCorps interviews Isay did with his father, he called himself a proud son of a gay father. His father was a psychiatrist, and about 10 years ago, was diagnosed with cancer; he died four days after the diagnosis.

“I never thought about it or listened to it. But at 3 a.m. on the night he died, I listened to (our conversation),” Isay said. “… I have young kids who are not going to remember him, and … that night, I knew that this was how my kids were going to get to know this monumental figure in my life.”

With this, Isay encouraged the audience to record interviews with their loved ones on StoryCorps sooner rather than later, because the future is unpredictable.

One of StoryCorps’ first initiatives worked with families who lost a loved one on 9/11, aiming to have each family leave a spoken record of their story. But even 20 years after the tragedy, some families have not come forward, and Isay said it is entirely their choice to decide when and if they want to record an interview.

“There have been … so many surprises with StoryCorps. It’s changed my life in so many ways and taught me so much about humanity and human thriving,” Isay said. “We have facilitators who travel the country, recording StoryCorps interviews for a year or two in these mobile booths, and every single one of them, when they come off the road, … (comes away with some sort of realization) that people are basically good.”

The next story Isay presented was of a man who was raised by a gay father in the 1980s, speaking on the early days of the AIDS crisis and his experience with loss during that tumultuous time.

“My family were mostly gay guys (who) were my babysitters and the guys who took the pictures at my birthday parties. I felt like I had this amazing family. I called them my aunties,” the man said. “It was a really wonderful, amazing world that came crashing down.”

In ’82, when the interviewee was 10, the first person he knew died of AIDS. His name was Steve, and he died two months after his diagnosis.

“It was pretty much a succession of deaths of my family throughout the next decade,” he said. “My stepdad Bill died in ’87. My dad died in ’91 after a really grueling six months of me taking care of him. I was 19, and at that point, everyone had died except for a handful of stragglers who I now hold near and dear to my heart.”

He knew his aunties held so much love and joy in their hearts, and he said this experience modeled “how to survive an epidemic even if you were dying while doing it.”

StoryCorps’ new initiative, One Small Step, works on building human connection across political divides. The last recording Isay shared was one of the interviews that inspired this initiative. The conversation was between a Muslim college student and a sheet metal worker who both attended Trump rally for different reasons — he for, she against.

The Muslim woman said the man was being harassed by some ralliers because he was wearing a Trump hat, which led to them snatching the hat off of his head.

“That’s the point where something snapped inside me, because I wear a hijab, and I’ve been in situations where people have tried to snatch it off my head,” the woman said.

After she approached the ralliers to tell them to stop harassing the man, the two realized that they shared commonalities.

“I’d like for this to encourage other people to engage in more conversations with people that you don’t agree with,” the woman said.

While statistics show toxic polarization is skyrocketing in America, Isay said 90% of people want a way out, and are ready to find a way to fix this polarization.