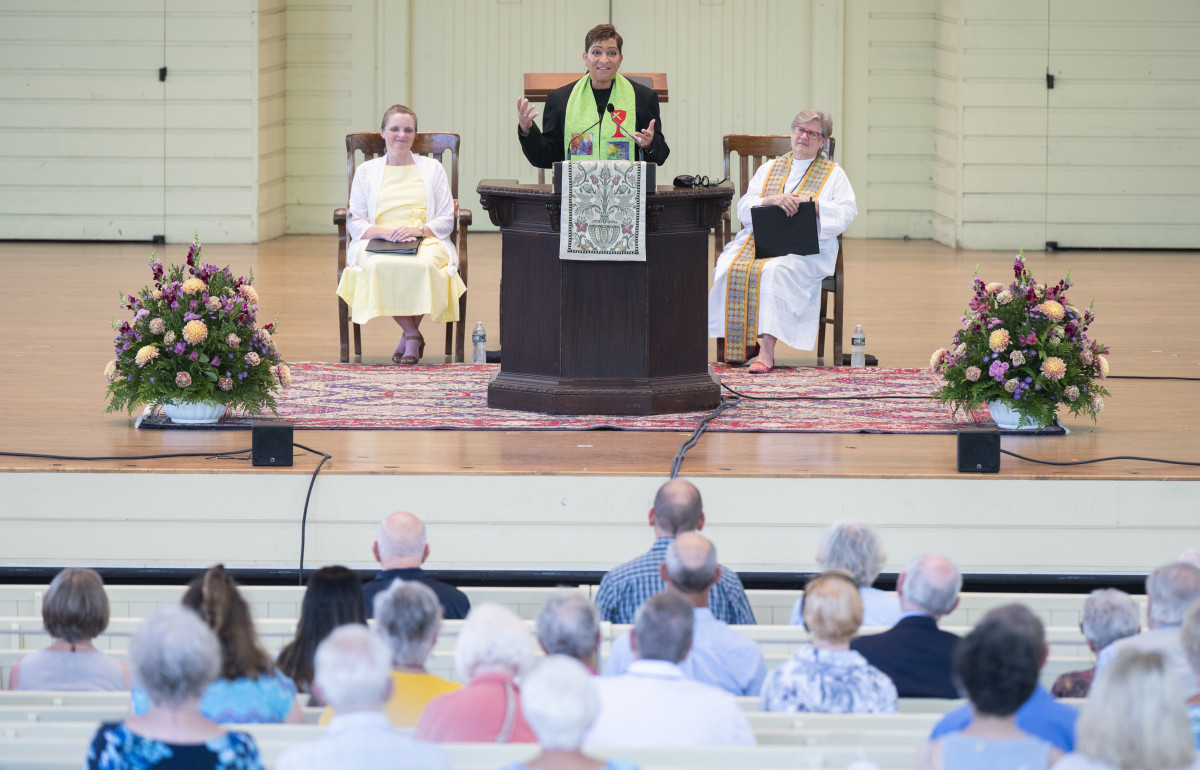 “We all need to work to achieve the kindom,” said the Rev. Teresa “Terri” Hord Owens at the 9:15 a.m. ecumenical worship service Thursday at the Amphitheater. Her sermon title was “The Kindom of God.”

Hord Owens said that theologians today are exploring the kindom of God as a new way of thinking about the reign of God. Without the “g,” kindom is gender neutral and is freed from the connotations of kingdom, including imperialism, monarchy, pomp and circumstance, edicts, mandate and pageantry.

Although Hord Owens admits to being a bit of a fan of the British royal family and Mary, Crown Princess of Denmark, she noted that royalty and imperialism formed the oppressive background for the life and times of Jesus. Under the occupation of Rome, the regional governors Herod and Pilate had their foot on the neck of the common people of Palestine.

The oppressed Jewish population wanted to exercise the same kind of dominating power. They expected their savior to arrive on a white charger horse. Hord Owens cited the mother of James and John asking Jesus if her sons could sit on his right and left hands when he came into his kingdom. Referring to the morning’s Scripture passage (Luke 17: 20-21), Hord Owens told the story of the Pharisees who wanted to know when they would see the earthly expression of God’s kingdom and, specifically, what their role in it would be.

It is always thus, Hord Owens said. She feels pain when peoples and nations demand freedom and then exercise the same kind of oppressive power that they rebelled against. It hurts her heart, she said, to see corruption in African nations that asserted their independence from colonialism.

Jesus himself did not equate the coming of the reign of God with hierarchical imperial power. Hord Owens explained that God’s reign is not coming with high offices and ministries and ambassadorships for the faithful. God’s kindom will be a community of kin, aligned with the teachings of Jesus. It will be, as Martin Luther King Jr. named it, the Beloved Community.

Jesus said that we are all family and that the kindom is already here. There will be no crown for anyone. Hord Owens said that the parables of Jesus are designed to teach what this community will look like when we acknowledge that it exists. She referred to the Biblical Parable of the Sower and the story of seed eaten by birds because it did not fall on fertile ground.

“The seed,” she said, “is always good. We need to ask ourselves if we are ready to receive the goodness of God.”

Hord Owens called on the congregation to remember that God is limitless and that we are called by God to be kin to one another. We cannot be kin unless we acknowledge that we are all related in love and are ready to receive the good seed.

The parables of Jesus, Hord Owens explained, make countercultural claims. In Jesus’ time, there were Platonic beliefs that the “best” people would receive wonderful spiritual gifts. These “best” people would become a higher order of being. This is not the message of Jesus.

Jesus told his followers that they must not be attached to material things. He taught that it would be easier for a camel to pass through the eye of the needle, a narrow gateway into Jerusalem, than for a rich person to give up their attachment to possessions.

Hord Owens referred to Matthew Desmond’s discussion of the mortgage tax credit at his 10:45 a.m. lecture on Tuesday in the Amp. Desmond pointed out that the federal government subsidizes housing for wealthy people with this tax credit. Even so, taxpayers grumble about housing subsidies for the poor. This grumbling, Hord Owens explained, is just like the rich man who walked away from Jesus when he could not imagine giving up the things of this world for eternal life.

“If you do not want to support a living wage or healthcare that doesn’t bankrupt people, you are that rich man,” Hord Owens said.

It is not enough to profess limitless love if you don’t want to do anything about it.

In the kindom, we tell each other, “Your humanity is worth being able to thrive, be affirmed, and respected,” she said.

We all need to be willing to give freely for the sake of our kin. No one has the right to destroy other people.

Hord Owens used to question what Jesus meant when he said that one must be like a child to enter into heaven. It isn’t about innocence, she said; it is that children have a capacity for wonder. Children are completely open to the idea that with God, anything is possible. Children are curious, welcoming, open to strangers, willing to explore.

She urged Christians to be as curious and welcoming as children. She imagines a Church more interested in what God intends for us than in clothing, power and imperial structures.

“I want a world where we don’t need food pantries,” Hord Owens said.

She said that the Church has to start taking steps toward change.

“If we just keep talking the talk, instead of walking the walk, the kindom will be far off,” Hord Owens said.

The kindom will be warm and feel like home. It should be our goal to be sure that material things do not get in the way of love and compassion. In the world today, too many people have more than they need, and too many people do not have enough to live.

Hord Owens enjoined the congregation to work for the kindom, understanding that all expressions of faith are worthless if we are not willing to do the work to make it be so.