‘The pen will always prevail over the knife’ — Hochul addresses Chautauqua 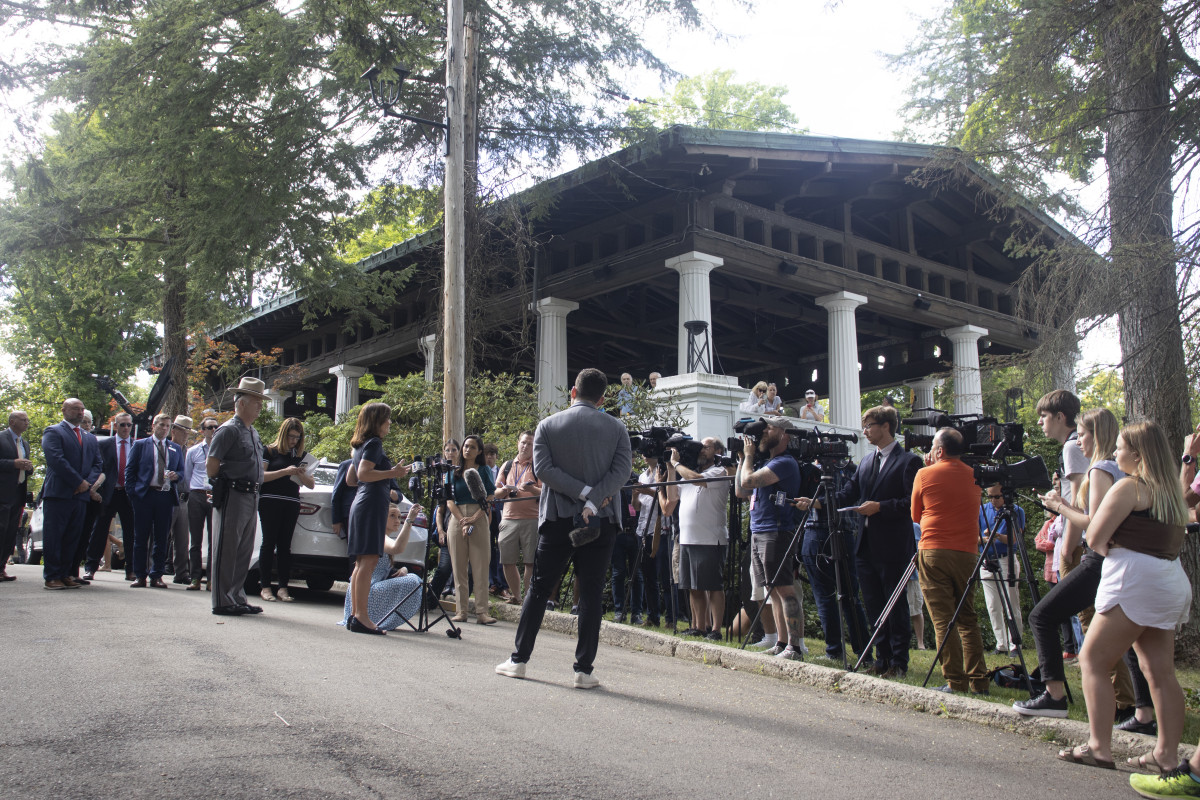 For decades, author Salman Rushdie faced threats of violence because of his writing. He lived under an alias, protected by the U.K. government for years during the most dangerous period of death threats, including an attempted assassination following a fatwa issued in 1989 by Iran’s Ayatollah Ruhollah Khomeini.

Khomeini died months after issuing this fatwa, and the zeal and influence the edict once carried seemed to wane, until Friday in Chautauqua’s Amphitheater, when a man rushed the stage in the opening moments of the morning lecture, stabbing Rushdie and drawing the world’s eyes to the grounds. The calls for violence, started in 1989, are still echoing, and New York Governor Kathy Hochul had a clear message two days after the attack.

“Calls for violence cannot be tolerated. … I want it out there, that a man with a knife cannot silence a man with a pen,” Hochul said.

Hochul visited Chautauqua Sunday afternoon, meeting with President Michael E. Hill, board of trustees chair Candace Maxwell, Chautauqua County Executive P.J. Wendel and New York State Police Superintendent Kevin Bruen. The group walked from the Colonnade to the Amp, where they met privately with those first on the scene at Friday’s attack, and then to the Hall of Philosophy, where a crowd of Chautauquans waited.

“I just took a few minutes to meet some of the individuals who would not have called themselves heroes, but I sure did,” Hochul said of those staff and community members who restrained the assailant and attended to Rushdie. “… (Those who) sprung into action and saved a man’s life — I can still see the trauma and pain in their faces, that they’re trying to figure out how something like this could happen in this place known for its healing.”

Chautauqua, Hochul said, is home — to her, a Buffalo native, and to those gathered in the grove, whether on the grounds for the entire summer, or just a week.

“I know why you’re here. You’re in search of something that is so unique to this place,” she said. “… This place doesn’t just value dialogue and freedom of speech, freedom of thought — this place exists because of those values. And I’m just here to tell you it will exist for the next 150 years founded on those values, as well.”

Rushdie’s book, The Satanic Verses, had drawn controversy, accusations of blasphemy, and book bannings and burnings: Attacks, all of them, against the freedom of expression and speech Rushdie has championed. It was those freedoms he was to speak to Friday, with Pittsburgh’s City of Asylum director Henry Reese, who also suffered minor injuries in the attack.

“(Rushdie) stood as a symbol to all of us of courage, great courage, and an attacker found him at this place — a place of openness, a place where thoughts are shared regularly,” Hochul said. “(The attacker) came here and attempted to do something. He failed. He failed.”

Rusdhie survived Friday’s assassination attempt — after being flown to UPMC Hamot in Erie, Pennsylvania, he underwent emergency surgery and was placed on a ventilator. He has since been removed from the ventilator, though has a long road of recovery ahead of him. Arrested Friday morning and arraigned late that evening, Hadi Matar, 24, of Fairview, New Jersey, has been charged with attempted second-degree murder — he has pleaded not guilty — and is being held without bail in the Chautauqua County Jail.

In the strongest terms, Hochul condemned Matar for daring to “violate the sanctity of a place like Chautauqua, to attempt an assassination on a world leader. That cannot happen. We will stand with courage.” This is not the first, or only time Hochul has had to address a grieving community in the past several months; recalling May 14 and the racist shooting at a Tops Friendly Market in a predominantly Black Buffalo neighborhood, she outlined what immediate steps her administration took. She signed into law a package of gun reform laws on June 6, and a task force was formed to investigate the role social media places in facilitating acts of domestic terrorism; New York Attorney General Letitia James is also investigating what role social media played in the Buffalo shooting.

Stronger red flag laws, policies on best practices and information sharing, help “connect the dots,” she said, and “that’s how you stop crimes.”

Hochul circled back to the idea of Chautauqua’s Week Eight theme, “New Profiles in Courage.” Rusdhie, she said, after years of hiding, finally said “no more. … I will not be bound by fear or a threat.” That inspires her, she said, to “use every tool at my disposal, including my voice, to call out this radicalization that’s going on, to call out anyone who perpetuates violence,” whether in Buffalo, Rochester, New York City, or small towns in Western New York — or across the entire country.