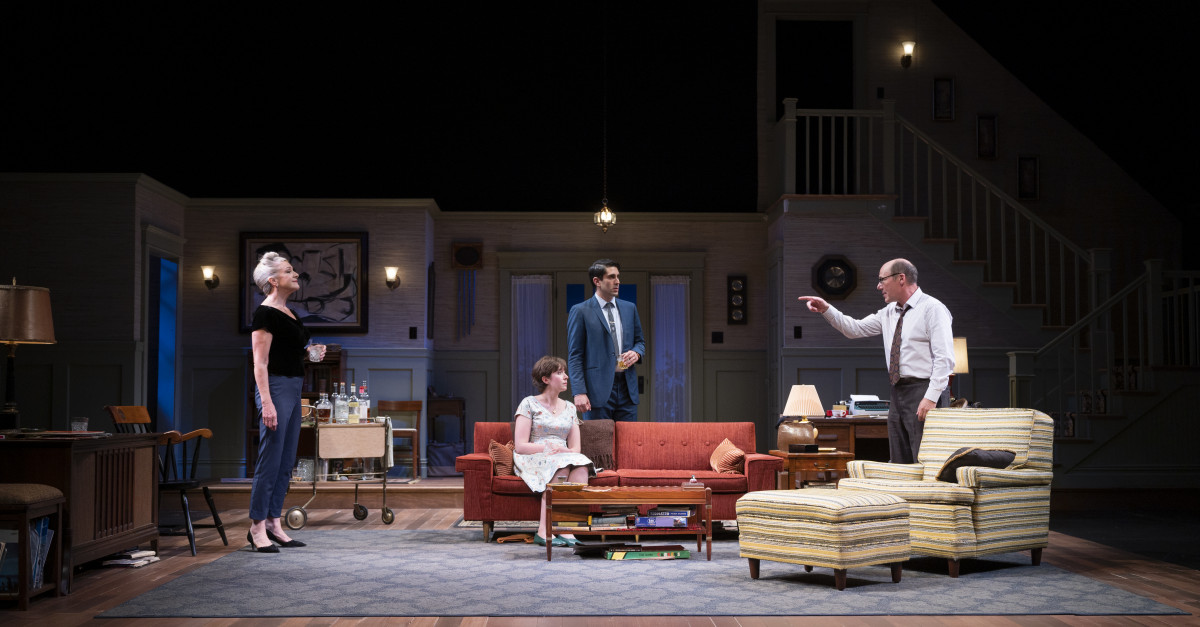 Paul Mullins, the director of Chautauqua Theater Company’s production of Who’s Afraid of Virginia Woolf?, is struck by the immensity and the staying power of Edward Albee’s classic piece. Although he has never had the pleasure of working on it before, he has seen both the play and the film version multiple times.

“It is this classic piece of theater that we continue to check in with,” Mullins said. “People want to do it; people like to do it. I’m very, very, very excited to be working on it. It’s like a challenge. It’s an incredible mountain to climb, and ocean to swim. It’s one of these monumental things that is epic in its dimension and in its depth.”

The play was first staged in October 1962, and 60 years later, it endures. It focuses on one night in the lives of two couples, George and Martha and Nick and Honey.

George, a college professor, and Martha, the daughter of the college’s president, attend a faculty event welcoming Nick, a new professor, and his wife, Honey, into the university community. The play commences when George and Martha invite Nick and Honey over to their home for an afterparty in the wee hours of the morning, and three hours of intellectual sparring ensue. CTC’s Who’s Afraid of Virginia Woolf? will continue its run at 7:30 p.m. tonight in Bratton Theater.

Mullins said that the audience will experience a long night with the two couples in real time, commenting on the intensity of the material.

That intensity comes from Albee’s dazzling command of language, and the razor-sharp intellect with which he imbues each of his characters. For each one, their words are their weapons of choice.

“Edward Albee’s writing is an astonishing thing,” Mullins said. “It is dense, it’s beautiful, it’s crafted. It is not casual language, although much of it sounds like everyday talking. And yet there are whole pieces of it that are, for lack of a better word, poetry, opera. It’s bigger than life, and yet it is life.”

Mullins has worked with CTC as both an actor and a director many times over, and is making his return to the grounds for the first time since 2015. He is delighted to be making theater at the Institution again.

The theater world can be a small one, and the Chautauqua theater world is even smaller. Mullins has previously worked with all four of his Virginia Woolf actors: outgoing CTC Artistic Director Andrew Borba (George), Carol Halstead (Martha), Adam Shaukat (Nick), and Madeline Seidman (Honey). Mullins has directed Halstead at Chautauqua in 10 different productions.

Shaukat and Seidman both graduated from Yale’s Master of Fine Arts drama program this past spring, and Mullins directed them in their student showcase. This production is Shaukat’s first professional gig, and he feels lucky to be working with a director he already knows.

“Being able to do this with (Mullins) has just been amazing,” Shaukat said.

Mullins’ familiarity with all of his actors is a gift, especially in this production. The short rehearsal period and the vast expanse of the material create a challenge, but his pre-established relationships with his cast make the task less daunting. The company has been able to walk into the rehearsal room and dive in swiftly.

“It’s very exciting, but very challenging,” Mullins said. “You’re trying to get the work done quickly and efficiently, and yet not just glide across the surface, but try to dig in at the same time. That’s one of the things about knowing them all. We could start more quickly. We could go quicker, deeper.”

Mullins loves an exquisite painting, a delicious meal and a cool dip in the lake, but nothing inspires him like theater does. He described the singular sensation of entering a space with a specific assemblage of people and sharing a live, one-of-a-kind experience.

“I love to be in that room with those people and see something together, and experience that thing together that happened just for us,” Mullins said.