We should laugh with God who has the last laugh, V. Rev. Kelly Brown Douglas preaches 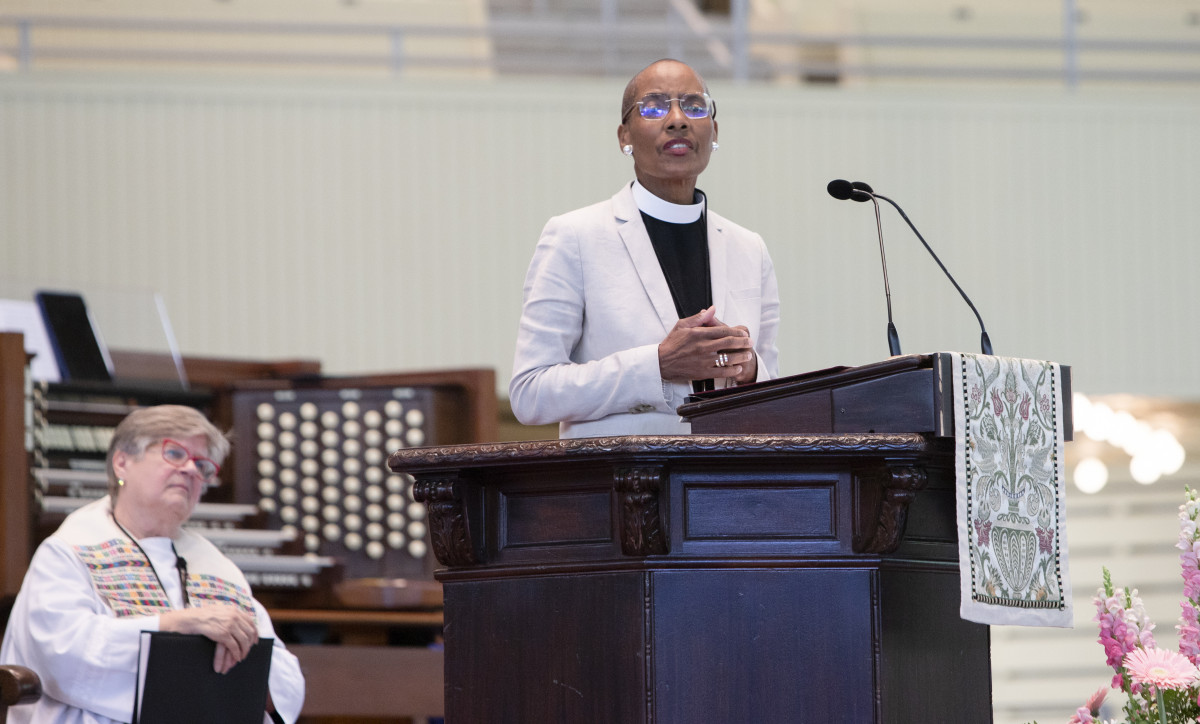 “The ‘l’ stands for laughter,” said the V. Rev. Kelly Brown Douglas in her sermon at the 9:15 a.m. ecumenical service Thursday in the Amphitheater. Douglas continued to spell out the word “soul” as she answered the question, “What does it mean to be people with soul in a nation with a warring soul?”

She challenged the congregation to choose an America defined by the Constitution’s pledge of liberty and justice for all, rather than a nation defined by its legacy of slavery.

Douglas told the congregation about her grandmother, Helen Vivian Dorsey. At 18, Dorsey was already a widow with a young child. She migrated from Atlanta to Columbus, Ohio, during the era when millions of Black people moved from the South in search of a better life. She worked as an elevator operator at the post office in Columbus.

As a girl, Douglas was fascinated by her grandmother’s job with the gates and buttons and starched uniform. Douglas didn’t comprehend how hard her grandmother worked and how difficult the job must have been working eight hours a day in a tiny, poorly ventilated space, with daily insults and low pay, in order to put a little bit of food on the table.

Douglas always looked forward to visits with her grandmother and getting a few pennies to spend on candy. She always found an excuse to sleep with her grandmother, and at night, Douglas learned about her dreams. Every night Dorsey prayed that her four grandchildren would complete high school. Douglas said that this was an audacious dream for a woman who barely had a fifth-grade education herself. At the time, white school officials did not believe that Black children needed to attend high school.

Douglas said that her grandmother’s dream was fueled by her faith, thanking God every day for another day and constantly praying for a better future. Unfortunately, Dorsey died at 58, before she saw any of her grandchildren graduate from high school and go on to complete degrees in higher education.

Her grandmother’s faith coursed through her own veins, Douglas said, but in recent years it has been harder and harder to maintain the faith. She described the pain and despair of living through the twin pandemics of COVID-19 and white supremacy.

Her faith was waning and her son challenged her, asking, “How do we know that God actually cares when Black people are killed?” and, “How long must we wait for the justice of God?”

Douglas described finding herself in a spiritual crisis. Was her faith a fantasy of hope? Was God to be trusted? Would God be as faithful to her as she was to God?

“Bewildered we are, and passion-tost, mad with the madness of a mobbed and mocked and murdered people; straining at the armposts of Thy Throne, we raise our shackled hands and charge Thee, God, by the bones of our stolen fathers, by the tears of our dead mothers, by the very blood of Thy crucified Christ: What meaneth this? Tell us the Plan; give us the Sign! Keep not thou silence, O God!”

“These were my words, too,” Douglas said, “as I found myself on the precipice of hopelessness and despair.”

Then one day she heard the voice of Jesus say the words he said to the Marys at the tomb: “Do not be afraid. Go to Galilee. There you will see me.”

These women were led from the despair of death and the cross to new life. They had lost faith in the story Jesus had told them. Then Jesus called them back to Galilee, the place where his ministry began.

When Douglas heard the invitation to Galilee in her own ear, she was deep in despair, surrounded by the ongoing reality of the crucifixion of Black people. She felt compelled to answer, to set aside her chilling fear of germs, to put on a mask and go down to Black Lives Matter Plaza at 16th Street in Washington.

There, surrounded by thousands of people at a protest, something happened. She found herself laughing out loud.

“We must be people who laugh,” Douglas said.

She cited Peter Berger, who describes laughter as a signal of transcendence. When we laugh, we discover serious discrepancies between the world as it is and the world as it could be. Laughter mocks the mighty who take themselves too seriously. Laughter relativizes and puts Earthly power in its place.

Douglas described the crowd of protestors at Black Lives Matter Plaza and the laughter pointing to the vast discrepancy between a world of systemic racism and a world in which Black lives truly do matter. The protestors were a rich mosaic of Black, white, and Brown people, young and old, male and female, queer and not queer, trans and not trans.

There was no claiming of privilege or special status, Douglas said ­— there were people collectively advocating for God’s just future. In God’s just future, everyone will be treated with divine and sacred respect because of the sacred breath that they breathe.

As she laughed at Black Lives Matter Plaza, Douglas said, her faith was resurrected. Her spiritual despair lifted and her soul was revived by laughing at the absurd discrepancy between our crucifying, present reality and God’s just future.

The resurrecting power of God will always prevail no matter how powerful the crucifiers are, Douglas said. God always has the last laugh.

To be people of soul in a nation with a warring soul, Douglas said, is to laugh with God and to utterly refuse to let injustice have the last word. Jesus told us not to be afraid. We can laugh by really believing in God’s just future and by being partners in forging that future. We can be partners by being stone catchers, outcast-oriented, unburdened and laughing.

The Rev. Paul Womack, pastor of Hurlbut Memorial Community United Methodist Church, served as liturgist. Barbara Hois, flute; Debbie Grohman, clarinet; and Willie La Favor, piano played the prelude, “Lo! Here the Gentle Lark,” by Henry Bishop. Alison Marthinsen, member of the Smith Memorial Library Board, read the Scripture. The anthem, sung by the Chautauqua Motet, was “God of Grace and God of Laughter,” by Alice Parker. Joshua Stafford, director of sacred music and Jared Jacobsen Chair for the Organist, played the Postlude, Toccata on “We Shall Overcome,” by Carl Haywood. Support for this week’s chaplaincy and preaching of the V. Rev. Kelly Brown Douglas is provided by the Gladys R. Brasted and Adair Brasted Gould Memorial Chaplaincy.