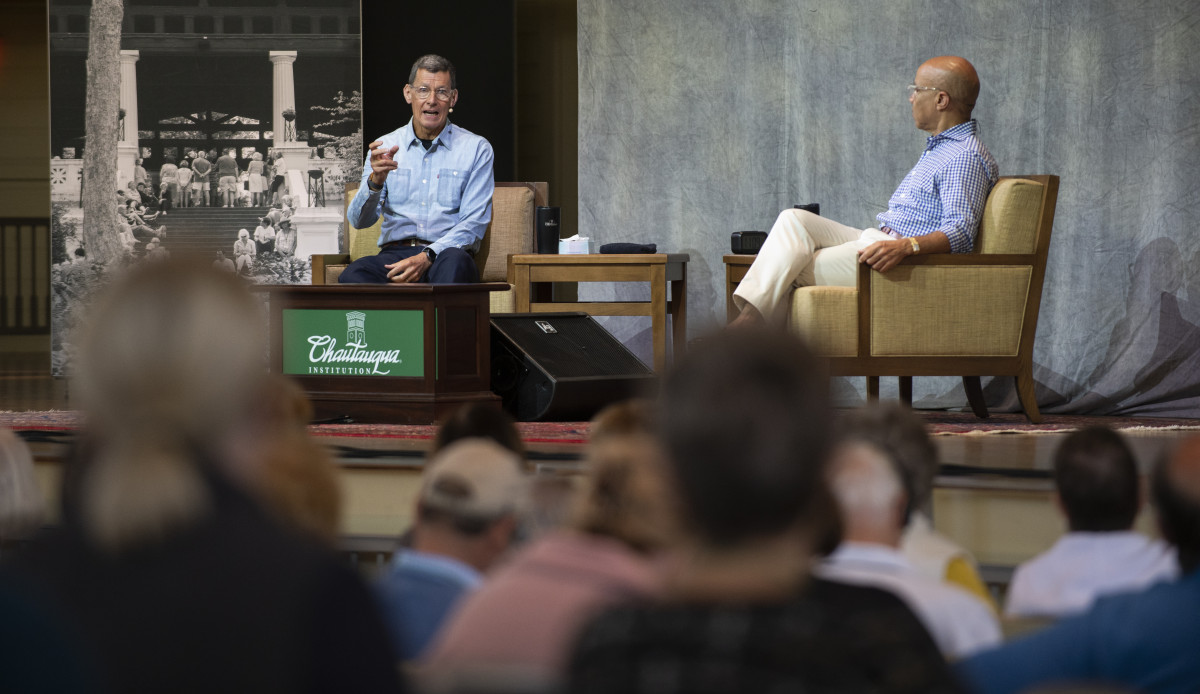 When Chautauqua Institution’s Department of Education and Department of Religion were first conceiving of a joint, 10-lecture platform dedicated to the theme of “New Profiles in Courage” with Ford Foundation President Darren Walker, for Walker, one name “immediately came to mind” — Chip Bergh, president and chief executive officer of Levi Strauss & Co.

In Bergh’s and Walker’s conversation Thursday, Aug. 18 in the Amphitheater, they talked about the state of corporate America, the state of the American economy, and the state of leadership in American industry.

Bergh prides himself on the fact that, for his entire professional career, he has served just three institutions: the U.S. Army, Proctor & Gamble, and now, Levi Strauss. The common thread? All three have been around for a very long time, he said, and all have a common purpose of making a difference in the world.

Founded in 1853 in San Francisco, during the midst of the Gold Rush, Levi Strauss bears the name of “the man, the legend” who invented and patented rivets for denim jeans.

“If you were a gold miner, … if you blew out your pants, you had to leave the mine and go back to San Francisco. You would lose about a month’s worth of potential income. So the rivet changed the jean forever,” Bergh said.

Strauss made a profit in his very first year; but he wasn’t in the business to make a profit, Bergh said. So he donated a portion to a local orphanage.

“He knew, 170 years ago, that the purpose of a company was to be more than just make money for himself and his family, and shareholders,” Bergh said. “He knew that part of the profit needs to go back into society, that business had a purpose to be good in the world. That was part of the legacy I’ve inherited.”

Walker asked how Levi Strauss’ values aligned with Bergh’s. The company, Bergh said, has a long track record of taking stands on social issues: Factories in the United States desegregated 10 years before the Civil Rights Movement; Levi Strauss was the first major American company to offer benefits to same-sex partners; in 1992, when the Boy Scouts of America introduced a policy excluding gay men and atheists from the organization, the apparel company pulled funding. More recently, Bergh said, in 2017 the company spoke out against President Donald Trump’s travel ban from majority-Muslim countries.

“You punched above your weight because of the moral leadership of the company and at a time when consumers, when the public, desperately needs moral courageous leadership from corporate America,” Walker said. “But they do not feel that they are getting it.”

Further, Walker asked if Bergh could discuss why CEOs of public companies should be incentivized to share more revenue with employees, rather than a single handful of stakeholders.

“The big debate these days is stakeholder capitalism vs. shareholder primacy,” Bergh said. “The purpose of business is to return as much profit back to the shareholders. Shareholders are important stakeholders, but there are other stakeholders.”

Long-term thinking, Bergh said, means acknowledging that “there is a much broader stakeholder base than shareholders, with your employees probably being the single biggest stakeholder in your business.”

Sustainable businesses, like Levi Strauss, are ones that believe that the employees, and the communities in which they live and work, should be a priority.

Levi Strauss went on the public market with an IPO in 2019; in launching that offering, Bergh said he had made it clear: “ ‘If you don’t like the fact that the CEO of a company is taking a stand on ending nonviolence in this country, do not buy our stock. We are not the company for you.’ ”

Walker shifted Bergh to the idea of ESG, shorthand for “environment, social, and governance.”

“Some companies are really trying to do the right thing, and you have other companies that are greenwashing and making claims that they cannot really back up,” Bergh said. “… With climate change, the actions that companies take or fail to take in the impact we can have in the world in that respect (can be significant).”

Environmental work is particularly important for apparel companies; Bergh said Levi Strauss has been proactive in “trying to take really meaningful and aggressive steps to make a difference there. It used to be that we used a lot of chemicals and dyes to produce some genes. We significantly reduce the amount of chemicals, the amount of dye in the amount of water.”

A new finishing process for Levi’s, Bergh said, saves billions of gallons of water a year.

Bergh noted that the company tends to get high marks on the “environment” and “social” aspects of ESG, but “dinged on the governance component because we have a dual flat structure.” The Strauss family owned the company before its IPO, and still has “a super-voting power, if you will.” But at this point, the Strauss descendants are so numerous, “the family’s interest in the company is exactly the same as what the public company interest should be, which is the long-term potential of this company.”

Thus, Bergh said, the shareholder interests are so commonly aligned that the company should be getting higher marks for it.

But Walker pointed out that as ESG becomes more of a buzzword, there is also a growing anti-ESG movement, with a number of state treasurers directing pension managers to not invest in what they call “woke capitalism.” Bergh again pointed to the Boy Scouts, and the fallout of pulling funding in 1992.

“The company got 120,000 letters and emails over the next week saying, ‘I’m burning my Levi’s, never buying Levi’s again.’ The company was fine,” he said. “They did not walk or waiver one bit. They stood to it. So one of the examples I like to use when we make a decision on whether we are going to weigh in on something is, well, history proved us right. … You are not always going to please everybody, but it’s about — are we moving the ball ahead in a meaningful way to make this world a better place? To make a difference?”

To go back to the “social” of ESG, Bergh shared his own moment of reckoning in the summer of 2020 following the murder of George Floyd.

“One of the most important legacies I want to leave is making our company a more inclusive and more diverse company,” he said.

The pandemic, and Floyd’s murder, threw “an incredibly bright light on the social and racial injustices that we experience in this country,” Bergh said. “The story that had been in my head was we were making so much progress as a company in breaking racism and the reality is what we discovered — I will speak for myself — is that we really haven’t.”

When he looked at the data, he was right, and he sees it as a failing.

“If you had looked at our numbers holistically in the U.S., we look pretty good, but if you strip out our retail stores and distributions center and focus on corporate headquarters, our numbers, our culture was not an inclusive and diverse culture,” he said.

The board makeup included women and Hispanic women, Bergh said,  buy there wasn’t any Black people on Levi Strauss’ board. And there’s still no Black leaders on his executive team. But he’s working on it, and Walker vouched for that to the audience.

Levi Strauss, Walker pointed out, does have a reputation for being a liberal, progressive company. Bergh shared strategies within the company to increase diverse hiring, particularly through a summer internship program.

“We do a lot of mid-career hiring, but not a lot of entry-level hiring. Eighty-five percent of those hires this year were BIPOC, because we were intentional about the results we wanted to get. We now have a process in place for hiring: 50% of the slate must be diverse,” Bergh said. “So we are getting different results because we have changed the structures, and we just have to stay at it.”

Walker asked what it felt like when Bergh walks into the room of the Business Roundtable, an organization of CEOs from America’s largest companies — and a big source of political campaign donations from individual members.

“I’ve got a bit of tension with the Business Roundtable,” Bergh said. “In many ways it serves a lot of good and does a lot of good work on behalf of the business community, but they often stay silent on a number of issues that I wish they wouldn’t stay silent on. … (But), at the end of the day, it’s really a lobbying institution to influence policy at the national level in particular.”

With 200 or so companies represented on the BRT, all of those CEOs are coming from different industries and different stakeholder groups. With the recent passing of the Inflation Reduction Act, Bergh said, the BRT was divided.

“They were very positive on a lot of the environmental things, but negative on, ‘How are we going to pay for it?’ … It was kind of like we want to do all the good stuff, but we don’t want the bad stuff to come along with it,” Bergh said. “I think that’s part of the dilemma.”

It’s a larger tension, Walker noted, “this notion in our culture and society that we want something, but we don’t want to pay for it.”

That notion goes beyond corporate America, Walker said, and extends to politicians and, most importantly, voters.

“I worry that we don’t have leaders both in corporate America and, more broadly, in society who tell us the truth: that you don’t get nothing for nothing, that if you want services, you have to pay for them,” Walker said. “… We have a culture here, and many CEOs are part of this culture, that is a race to the bottom. ‘Tell me the state that will charge me the lowest taxes and I will move my headquarters there.’ ”

So, Walker asked, is it possible to imagine that this ideology can be changed?

“I think the answer is ‘yes,’ ” Bergh said, and went back to the very beginning of the company he now runs. It was started in San Francisco, is still headquartered there, and many members of the Strauss family still live there.

But the lease at the headquarters’ building is expiring at the end of 2022. And the company made a choice to stay, rather than race to the bottom.

“Two years ago we started talking, should we look at a lower cost place to do business?” Bergh said. “Even just moving across the bridge from San Francisco to Oakland would have saved us about $10 million a year just in city taxes. We decided, you know what, we are here in San Francisco as part of our legacy. … Today there is a vacuum of leadership in that many institutions and government, and companies needed to step in and build the bridge.”

We should laugh with God who has the last laugh, V. Rev. Kelly Brown Douglas preaches