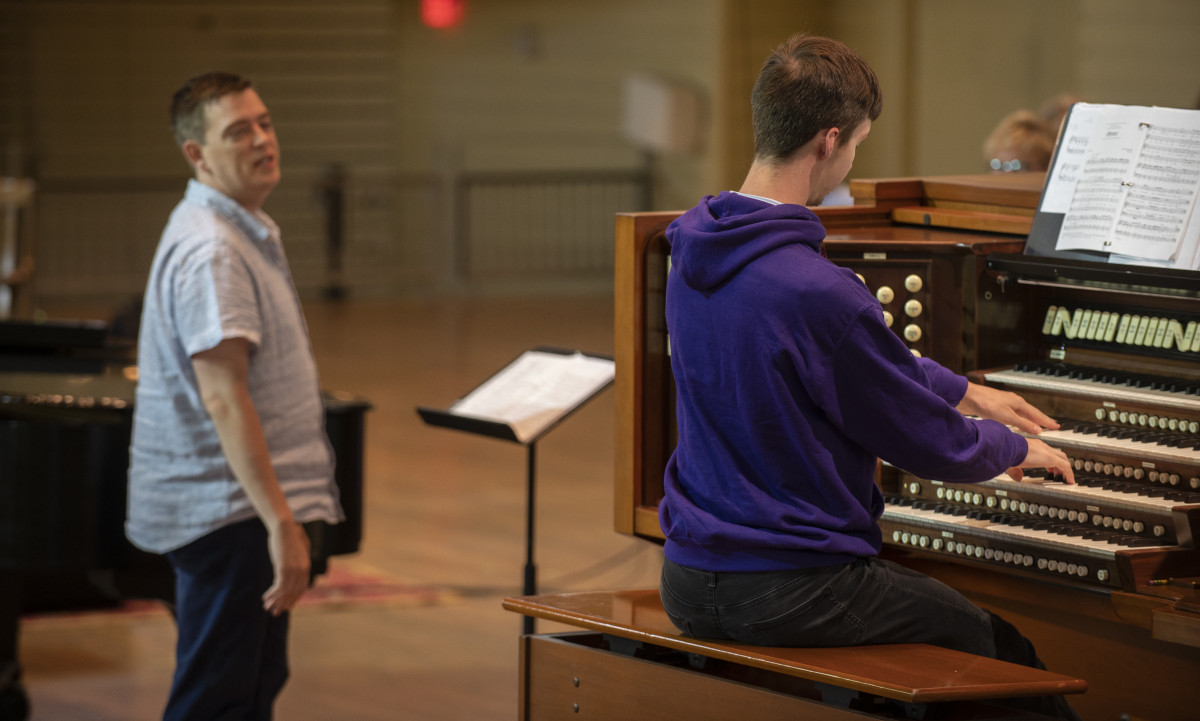 Balancing on a beam, a pair of hands were steady and ready for the next move. These hands would go on to rhythmically press down on keys, feet pushing down on pedals. Slow, precise movements can make for a plethora of opportunities in both athletics and music.

Nicholas Stigall has gained experience with the latter this summer, as he joined Chautauqua Institution for the 2022 season as its first organ scholar under the mentorship of Josh Stafford, director of sacred music and Jared Jacobsen Chair for the Organist. A Knoxville, Tennessee, native, he made the switch from competitive gymnastics to playing the organ at 15 years old.

Stigall’s family had a trampoline in their backyard and, when he was out doing flips one day, his neighbor told him to check out the local gym. He took some classes and started competitive gymnastics.

“While I don’t consider myself competitive anymore, I think a lot of the work and drive that I developed as a gymnast has carried into my music, and it’s helped me to pretty quickly develop my skills,” Stigall said.

He’s a rising senior studying organ performance at Indiana University, and studied under Edie Johnson, an organist and professor at the University of Tennessee, while in Knoxville. Stigall said she was very influential in getting him to where he is today.

“I remember during our lessons feeling so encouraged and so empowered by her teaching,” Stigall said. “A large part of my work with her involved mental practice and meditation. … It was just such a powerful realm that I had never experienced before, and I was able to carry some of that mindfulness into other areas of my life.”

Ask any Chautauquan, and they’ll often say the mental and spiritual influence of Chautauqua is indescribable, but when they can find the words, Stigall has noticed they tend to say: “It’s heaven on Earth.”

Stigall, who had never been to Chautauqua before, has encountered this phrase frequently this summer.

“There’s not a dull moment. When I first arrived, it was incredibly overwhelming,” Stigall said. “I didn’t know what to do with myself; I didn’t know how to manage my time. I think the wealth of offerings that are here has been the most surprising thing, and it wasn’t an expectation.”

Stafford had first reached out to a mutual friend and classmate of Stigall’s who wasn’t able to interview for the position.

“I had a Zoom call with Josh and we talked about what the position was, what the requirements were and I expressed interest,” Stigall said.

Stafford created the position this year as an opportunity for young organists to get more opportunities and experience with the organ and choral performances.

The main duty of the organ scholar is to play all of the accompaniments for the seven choral services each week. Stigall also has Wednesday recitals on the Massey Memorial Organ.

“Nicholas has been so easy to work with,” Stafford said, “He’s a really quick learner (and) he’s a really kind person. … He is easily one of the best assistants I’ve ever had, and I think he was the perfect person for an inaugural organ scholar.”

With his work in the organ department at Indiana University, Stigall hasn’t had much experience working with choirs. When Stafford told him about all of the accompaniments, he was terrified, but excited.

“It was a push I wanted to give myself to better myself,” Stigall said.

In their mentor-mentee relationship, he said that Stafford is lovely and is always quick to help him or answer questions he may have.

“I really love the balance of professional and educational that I get with Josh. He’s a really down-to-earth guy,” Stigall said. “I would consider him a friend. I really have enjoyed working with him. He pushes me, but he’s not unreasonable.”

Stafford said he can’t say enough good things about Stigall, and was impressed by how well he took on the duties of the organ scholar.

“He’s a great musician,” Stafford said. “He is not only a quick learner of notes, but he also plays musically all the time. He’s been a really sensitive accompanist and he’s taken very quickly to the Massey.”

Although the organ scholar program is just in its first year, Stigall said he wouldn’t be surprised if the position becomes a prestigious opportunity.

“There’s really no other program that I’m aware of that has this caliber of expectation and training,” Stigall said. “I think the organ scholar position is going to become highly coveted among young organists.”

Stafford agreed and said organists at Chautauqua are held to a higher caliber, much like his predecessor Jared Jacobsen, for whom his endowed position is named.

“There’s really nowhere else in this country where he would be playing seven services a week,” Stafford said. “It’s amazing how well he has adapted to that.”

While overwhelmed at first, with his routine down, Stigall said he’s eager to experience more of what Chautauqua has to offer in the next few weeks.

“I definitely want to go to more programs,” Stigall said. “I really struggled with the first half of the season with balancing work. … I feel like I’ve certainly put a lot into my work, (but) I haven’t taken as much time for myself to do the things that I want to do.”

The Massey Memorial Organ is a Chautauqua staple, and being able to learn and play it is one of the highlights of Stigall’s time on the grounds.

“Overwhelming is the word that keeps coming to mind — an outdoor, symphonic organ at that size — you don’t get that experience every day,” Stigall said. “I’ve never played an outdoor organ before coming here, and it’s unlike any other organ I’ve played.”

His two favorite experiences this far are playing “Holy, Holy, Holy,” on Sunday mornings and “Largo” Sunday nights to close the Sacred Song Service, and both connect back to the Massey.

“The first time I got to play ‘Largo’ at Sacred Song Service (and be) part of that tradition — it’s been played every year since 1907,” Stigall said. “Just knowing that I participated in this tradition of over 100 years was a really special moment for me.”

He said his experiences at Chautauqua have been terrifying, overwhelming, satisfying, surreal and everything in between, but he will always come back to the instrument that centers him.

“I knew from my very first organ lesson, first time ever touching an organ, that it was something special to me,” Stigall said. “I want to keep doing that with my life.”