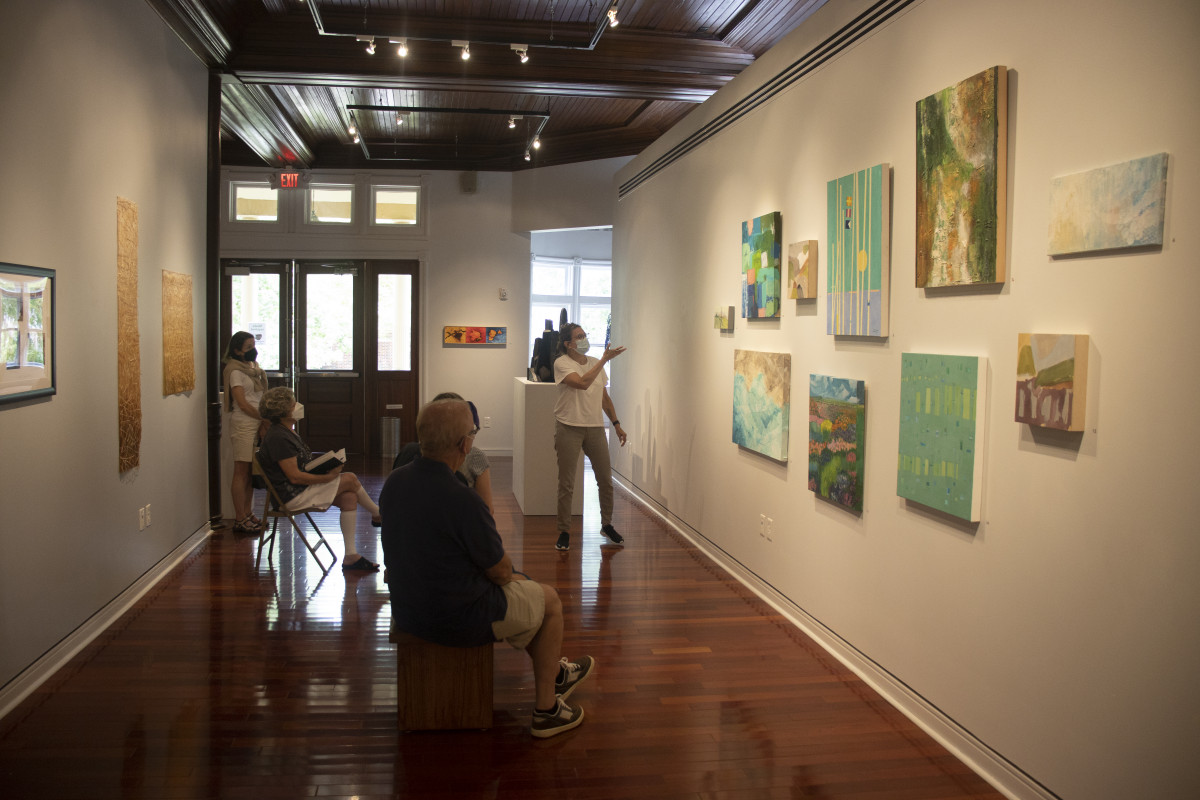 Exhibiting members of the Friends of Chautauqua Visual Arts spend most of the summer behind the scenes supporting the arts. Now, it’s their turn to be in the spotlight.

Every summer, during the last few weeks of the season, exhibiting members of Friends of CVA get the chance to showcase their work in an exhibition. This year’s exhibit, titled “Thinking Green,” features over 21 artists and is currently on display in the Fowler-Kellogg Art Center through Aug. 24. The theme challenges the artists to contemplate what it truly means to “think green” — to be cognizant and aware of their surroundings, nature and the environment.

In recent years, while human impacts on the environment have significantly increased, artists are endeavoring to promote environmental consciousness through their creative usage of materials, mediums and messaging. Spotlighted artists work within a wide range of mediums — such as painting, sculpture, ceramics, textiles and woodworking.

Artist Jerome Chesley has become widely known for his watercolor paintings of flowers, architecture, homes and other buildings. Chesley received a degree in art education from the SUNY College at Buffalo. In his two exhibition pieces, he has painted images of Chautauqua and county landmarks.

One of his pieces, “Porch Rockers,” is of the historic Hotel Lenhart in Bemus Point, known for its colorful rocking chairs and picturesque views of lake sunsets. Meanwhile, Chesley’s other painting is of the Fowler-Kellogg building, which has a history of its own.

Fowler-Kellogg used to function as a children’s school before it was renovated in the early 2000s, briefly becoming the Daily’s office and Special Studies classrooms before becoming one of the main galleries in 2009. Chesley taught his first Special Studies art classes in the building. As a former K-12 and undergraduate art instructor, and former president of the Florida Watercolor Society, he said that he ultimately enjoys teaching others about art in whatever capacity he can.

“One day, I signed up to start teaching classes here,” he said. “I remember meeting some of the nicest people through those classes. … The whole idea of art and painting, people putting out their feelings, emotions and interests on paper, you get to know so much more about that person, especially teaching.”

Susan Patton, who also has work being featured in the exhibit, said that she actually started painting as a result of participating in some of Chesley’s classes after she retired. She has been coming to Chautauqua for over 50 years, and has been a Friends of CVA member for over 20 years.

“I retired and I was looking for something that I might want to do, so I started taking art classes,” she said. “Chesley and Lynn LeFauve were always two of my favorite teachers. … I love the freedom and the expression of the classes here.”

After attending classes, Patton said that she immediately became “hooked,” started her own artistic practice and built an art studio in her South Carolina home.

Her featured shadow box sculpture of a couple tenderly holding and kissing each other on a park bench, titled “Before You Know it,” depicts the progression of a couple’s relationship from young adults to advanced years. Even though the couple’s hair turns gray and aging occurs as time progresses, their love for each other never withers, remaining evergreen.

The piece is from her series “Seniors Doing Stuff,” where she creates images of seniors doing active and unexpected things, which often challenge ageist views of what actions are appropriate for older individuals.

The series combines multiple mediums — painting, ceramic and sculpting techniques — into one single piece. She came up with the concept for the series after taking a clay course.

“I was taking the course and didn’t know what to do one day,” she said. “I found a cookie cutter that was in the shape of a gingerbread man. … I cut out a man and started shaping it. … I always seem to gravitate toward humans.”

They came out of the kiln and, being flat, Patton started painting them and molding them to be three dimensional.

Patton said that she likes incorporating multiple mediums into her work.

Self-taught artist Lynette Caplice expressed similar sentiments about her acrylic fabric paintings. This is her first member’s exhibition, and she said she enjoys opening up the medium of painting.

“I just feel like there’s so many things that you can use around you, so it’s just not a flat plane,” she said. “I really like the idea of incorporating three-dimensionality into my work.”

Caplice has been coming to Chautauqua for 16 years, and her husband is a sixth-generation Chatuauquan. In her featured paintings, “Inspiration” and “Exploration,” she plasters fabric scraps from her old cottage curtains onto her canvases, giving texture to what is traditionally a flat surface.

“I do really enjoy exploring multiple mediums to add texture, so that’s where the fabric comes out,” she said. “I feel like fraying the fabric adds another dimension to it, as well, playing around with that.”

Artist and longtime Chautauquan Judith Gregory also makes use of an undervalued material: used tea bags. She first started coming to Chautauqua during her final years of high school after receiving an arts scholarship.

Gregory is a former president of the Chautauqua Center for Visual Arts, now known as CVA, which she helped bring under the Institution’s umbrella. Her tea bag inspired sculptures “Green Tea I” and “Green Tea II” are currently on display in the exhibit.

“I have been using tea bags in my work for a number of years,” she said. “… It got interesting because friends and family would just start leaving used tea bags on my porch.”

Gregory said that even though she appreciates their transparency and lightness, what she ultimately really loves is that each bag has its own unique stains and embedded histories. She likes the mysteries and unknowns each bag carries — the uncertainty of whether the bag was used at an elaborate tea party, or if it was simply used in solitude as a warm source of comfort on a cold day.

She covers the tea bag canvases in her sculptures with a layer of their own ripped out mid-seams. Many tea bags today are made out of a material called Acaba, a durable plant-based fiber, that is able to withstand liquid saturation and hot temperatures.

“People think they’re fragile, but when you think about tea bags, you boil them in water, you squeeze them, you twist them, and yet through it all they still survive,” she said.

Gregory said that she likes incorporating conceptualism into her pieces.

Subagh Khalsa also enjoys incorporating innovative concepts and important messages into his work. Whether it’s a sculpture, a piece of furniture, a boat or a house, he said he’s always making something.

Khalsa’s two featured sculptures are made out of disease-infested wood and wood from dead trees, which he blackens with a blow torch.

“I really enjoyed working with those wood species, and then I found out that the theme of the show was green,” he said. “It came to me that this could be a statement (about the environment) because it’s something that I am really concerned about.”

His piece, “Carbon Sequestration,” highlights his belief that America needs to reduce its carbon footprint to curtail looming environmental threats like global warming. His other piece “Warning: The (Not so green) ‘City upon a Hill’ is splitting apart” calls attention to how industrialization, anti-democracy and climate change all challenge more idealized notions of America.

Overall, he raises awareness to negative human impacts on the environment.

Nancy Nixon Ensign draws on similar themes in her work.

Ensign grew up around the shorelines of Lake Erie and Chautauqua, and after returning to them years later, she noticed changes in the waters.

“In the ’70s, Lake Erie was poisoned. … Our lakes have changed dramatically since my youth for good and bad,” she said. “… I used to swim in the lakes, which is certainly something that I wouldn’t do today. … I think the health of the lakes are becoming more prominent in people’s view and people are now taking more preventive measures.”

Her sculpture, “Last Step of Humanity,” is inspired by the introduction of invasive algae plants to local bodies of water. This contrasts her acrylic painting, “Summer Guests,” from her COVID-19 quarantine-inspired series, wherein she views the environment and the lakes as a place to find peace, tranquility and stability amid uncertain and unprecedented times.

“I think the lakes have important and inherent healing qualities to them,” she said. “… I think all water does; it brings a sense of calmness. All my work now has the lakes being represented in some way.”

Overall, artists in the exhibit are encouraging and challenging viewers to think critically about the environment, starting right here at Chautauqua.

“Our Chautauqua Lake and Lake Erie beckon summer guests from other states to celebrate the consistency of their beauty,” Ensign said. “Lake life refocuses our view … and we feel comfortable to have their calming energy in our midst.”