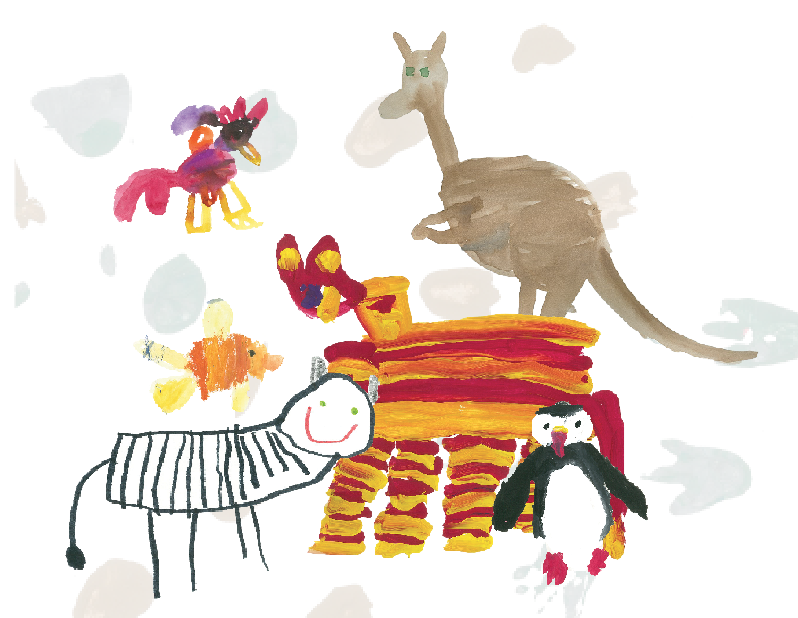 Pianists and singers and instrumentalists, oh my!

School of Music Managing Director Oliver Dow wanted to engage the entire community with a concert meant to celebrate the students studying at Chautauqua. So he’s herding together pianists, a chamber orchestra, singers and a pack of kids for a wild Chautauqua premiere of “The Carnival of the Animals,” by Camille Saint-Saëns at 7:30 p.m. August 10 in the Amphitheater.

The 14-movement piece, which Saint-Saëns wrote for friends (the Frenchman,  supposed to be composing what became his Organ Symphony, told his publisher, mais c’est si amusant! — “but this is so fun!”), has never been performed at Chautauqua. With the help of young artists from Children’s School and Boys’ and Girls’ Club, the one-of-a-kind show will feature original artwork and prose made by young Chautauquans.

A tiered platform was built for the uniquely scaled chamber orchestra, which, in addition to marimbas, strings and gong, will comprise two pianos set side by side.

Dow’s vision is to start off building a little hype by playing recorded animal noises in the Amp an hour prior to the start of the show.

Once it starts, there will be almost no pauses.

“This is meant to be a bit of a different approach,” he said. “It’s meant to be informal and really easy to watch.”

Dow said though people likely have not attended a performance of “Carnival of the Animals,” there will be some familiar tunes throughout.

“This is a classic work,” he said. “There are at least four or five tunes that are really recognizable. The Elephant and Swan are probably going to be things you didn’t realize, but were part of a commercial.”

He said the unique abilities of the Amp to present music allow for loud, dramatic fanfare. The four percussion students involved in the show will make sure the drama is heard in the very back row.

“I don’t think the people in the audience will have ever heard something quite like this before,” Dow said.

According to Dow, the piece is difficult to include in the program largely due to the absence of piano students past Week Five, and the necessity for two pianists to play the virtuosic parts.

He said because older professional pianists would not be likely to add a piece like “Carnival of the Animals” to their repertoire, it requires a student who has the free time to put it together.

Piano students Tim Stephenson and Christine Wu were invited to extend their stay at Chautauqua solely for this production.

Wu, the winner of the 2015 Annual Piano Competition said the part of the “young pianist” is a sort of joke on Saint-Saëns’ part.

“It’s just meant to make fun of practicing pianists,” she said. “We are supposed to play fundamental piano exercises, and play them poorly.”

She said a lot of music written in France has little jokes like that tucked inside. There will be references, she said, to a lot of famous tunes that have been distorted.

Dow said the movement is a mess, but it’s supposed to be.

“We asked them to really ham it up,” Dow said.

“We just play a bunch of wrong notes, and not on time,” she said. “We’re just doing a bit. I think it’s just funny.”

Dow said he wanted to take the idea of an engaging repertoire one step further by making the audience part of the content.

“It gives the kids the feeling that they are involved in the concert because they have actually contributed,” Dow said.

Children’s School also got their hands in the mix by making drawings of animals for a slideshow that will be projected during the performance. The little ones have been drawing their impressions of animals since Week Two. During a select few Fridays, instrumental students played excerpts from the piece at the school.

Jennifer Flanagan, program director of Club, said “Carnival of the Animals” also appeals to the kids she oversees. She said music counselor Ashley Wohm worked with kids ages 6–12 during her usual music programming to express their ideas of the different animals in prose form. The text written while experiencing the music at Club will be incorporated into the show via projections.

“Having the kids provide their impressions really gets them involved,” she said. “They can relate to how music can represent different animals. I’m really looking forward to seeing a lot of kids attend with their families.”