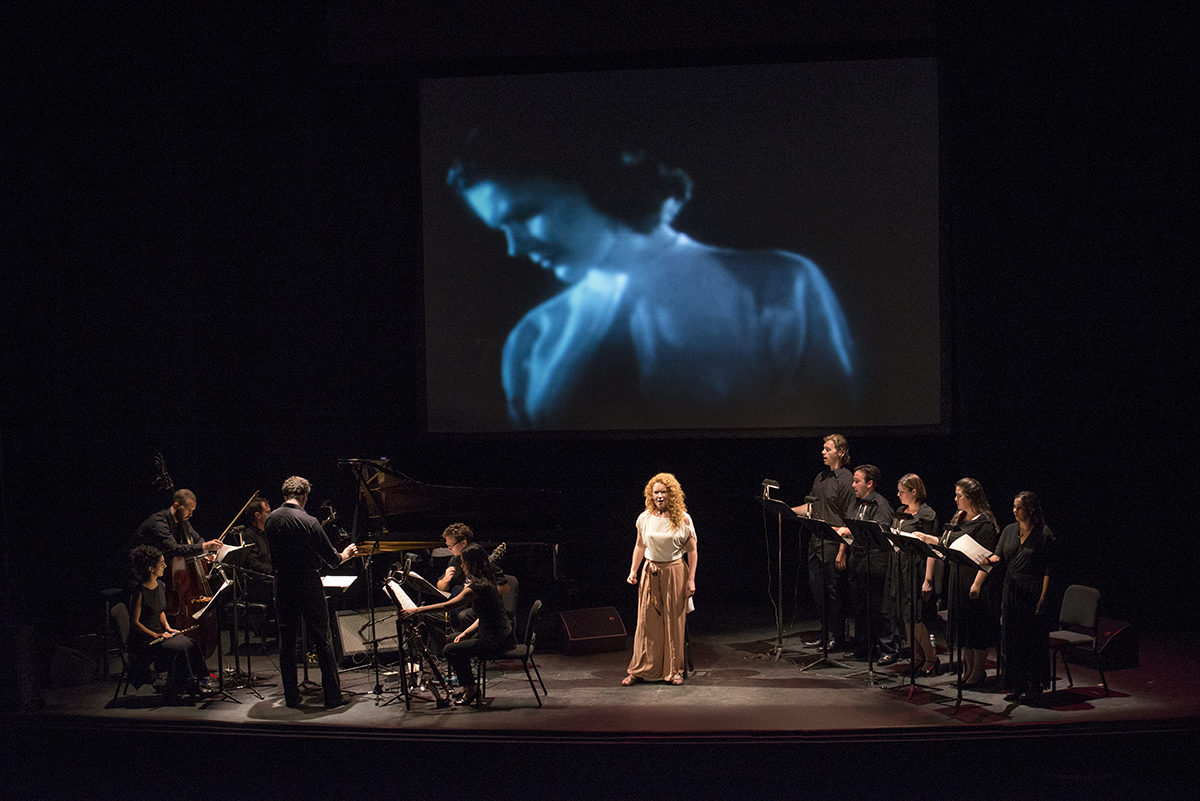 Like all art forms throughout history, new operas force change and continually ratchet up narrative possibilities. Audiences, accustomed to the usual, were jarred by Mozart’s The Marriage of Figaro, Verdi’s Rigoletto, Leoncavallo’s Pagliacci, Puccini’s Tosca, Strauss’ Elektra and Salome or Stravinsky’s The Rake’s Progress — just a few examples of dramatic and musical breakthroughs that changed the game.

During our video age, the visual component has become much more important than the old “park and bark.” In recent years, music in operas such as successful ones by Philip Glass often seem like accompaniments to the visual aspects, and Eurotrash directors dream up ever-more bizarre stage antics for shock value.

Hot Brooklyn composer Missy Mazzoli advances the form a little further with her Song From the Uproar: The Lives and Deaths of Isabelle Eberhardt, presented Monday night in Norton Hall by Chautauqua Opera as a first-time collaboration with the Logan Chamber Music Series. Its visual component was made up of soft-focus, sometimes distorted black-and-white photographs and video by Stephen Taylor; titles were also projected, essential for any opera sung in English, and the opening and some sounds were pre-recorded.

Eberhardt’s salvaged journals fascinated Mazzoli when she found them in a Boston bookstore, and no wonder. Near the turn of the 20th century, the Swiss woman traveled to Algeria after the sudden deaths of her family, joined a Sufi sect and dressed like a man, lived a nomadic existence crossing the desert on horseback, converted to Islam because of her love affair with an Algerian soldier through a stormy relationship and rejection, survived an assassination and a failed suicide plot, and died in a flash flood at the mere age of 27. Such a strange and dramatic life seemed ideal to express the passionate soul of this independent, uncompromising woman, liberated through erotic and mystical extremes yet consumed by anguish in a search for some meaning.

Mazzoli’s opera was led by Steven Osgood, in his first season as Chautauqua Opera Company’s artistic and general director, who urged her to compose this first opera. Next month, he will also conduct her newest, Breaking the Waves, for Opera Philadelphia, where she had been a composer-in-residence.

The one-act, 15-section work, with imaginative and often-poetic libretto co-written with Royce Vavrek, shows a remarkable promise in the musical development of the genre, a mix of wordless chant, bouncy indie rock/jazz, electronics, sung declamations and insistent instrumental sonorities. Minimalism, or constant repetitiveness, is just one color in her palette, used when required for emphasis. Often, musical fragments veer into unexpected directions, like a friend emphatically telling a complex story you don’t completely relate to or understand, but the rainbow of sounds she derives from only five outstanding players sounds like the future.

The overture began with a crackling background as if from old scratchy records, throbbing piano figures and haunting, taped wordless lines, setting a mood of poignancy, melancholy and impending drama. Taylor’s film continually uses initially fascinating images of a small girl holding the hand of her father, who dissolves away into nothing, a submerging woman, birds and scudding clouds. “This World Within Me Is Too Small” opens the door to Eberhardt’s turbulent persona as a constant outsider, sung passionately by Fischer. The undulating, surging instrumentation underlined the restlessness of her life with its own lack of resolution. That movement, thrusting us into the nature of a searching spirit, was one of Mazzoli’s most successful in creating a powerful mood.

“Capsized Heart” blended in the other voices, implying her family’s deaths with quickly flashing, repetitive images. In that sequence, our wondering what relevance they have to the story took attention from the eventual wordless, celestial choral singing; that was true in several other places, where random-seeming images flew at us too quickly. “I Have Arrived” displays Eberhardt’s search for her own song as a symbol of her life on arrival in Africa; we get the camels and crowded, exotic locales, but many of the shots here and in other places, though interesting, didn’t clarify the story.

One of the most unusual sections, “100 Names for God,” includes the many decidedly non-godly elements of her life in her anxious need for a religious base, and her existential struggle even in accepting or choosing one. “I Am Not Mine” delivers a lovely floating line, about as close as we come to an aria. “Chanson” begins with movies of cavorting nightclub dancers, though Eberhardt could not even stand her happiness and, when things begin to go wrong, Fischer sat with booze next to the NOW pianist, pushed him away and played the crushing final chords herself.

Other songs of the work, “Barrel At The Breast,” the dirge-like “You Are The Dust” and “The Hunted” (with Buñuel-like bleak images) traverse the road from the rapture of love to the pain of her husband’s infidelity with no relief from liquor. The final four movements intensify in urgent, insistent flights, near-wails from Fischer and choral outbursts against the emotional desert of loss. As the music depicts the pain, with the guitar strumming a rhythm and the bass playing high in its range, images of flowers keep closing; her letters are eerily seen being unwritten as the music too seems to unspool. We hear in Fischer’s urgency a constant preoccupation with death which, unexpectedly, arrived; though there’s no stark depiction of her demise, we’re reminded by the recurring film of a woman descending into water. After declamatory flute lines and final measures floating into silence, Fischer turned and raised her hands to the blank screen.

Dressed in a white blouse and long cinnamon-colored trousers, Fischer has a sterling reputation for involvement in a large catalog of new American music. She is a wonder, singing with versatility and without a score through a huge range with a mighty, deep register. Mazzoli, Vavrek and Taylor attended the performance, taking bows with Fischer, the five superb musicians and five singers.

Mazzoli is clearly a major talent who has skillfully woven those five instrumental timbres around her vocal phrases into a full-sounding whole. In some places, the instrumental lines seem to have no relation to the vocal ones, as if to emphasize Eberhardt’s constant grappling against the societal norm for women in those days, but Mazzoli knows exactly what she’s doing and where they’re going. Her original mixture of sounds and shifting rhythms from those few elements demonstrates an intense desire of storytelling, and this reviewer can hardly wait to hear her latest in Philadelphia.

Osgood is giving the company a leap forward by adding this contemporary chamber opera to the season’s more standard repertory pieces, La Traviata and The Mikado. Operatic planners always have to consider whether audiences are ready to attend and embrace new works, but they must also trust a desire for newness and diversity. Next year’s season will not only feature the American premiere of Respighi’s reworking of Monteverdi’s Orfeo (1609) and Gaetano Donizetti’s comedy Don Pasquale (1843), but Philip Glass’ Hydrogen Jukebox, a 1990 piece based on verses by Allen Ginsberg. Based on Monday afternoon’s two-thirds-full crowd at the Norton for a new chamber work, that trust is eminently justified.