Putting a book out into the world can be a fulfilling experience for a writer.

For Cyrus M. Copeland, he felt something else with his book Off the Radar: A Father’s Secret, a Mother’s Heroism, and a Son’s Quest. 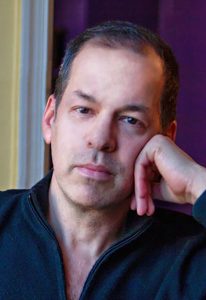 “When the book came out, it was a little bit of an anticlimactic experience for me,” Copeland said. “It didn’t make as much of a splash as I thought it was going to make.”

So when he learned he’d won the 2016 Chautauqua Prize, Copeland said he felt pure astonishment.

“I felt almost like I was floating up out of my own body,” Copeland said. “It seemed like such a surreal moment to me. And as it was happening, I thought, ‘Pay attention to this. These kinds of moments don’t come along very often in the course of a lifetime.’”

Copeland will receive The Chautauqua Prize and give a presentation on his book at 3:30 p.m. today in the Hall of Philosophy.

Off the Radar tells the story of Copeland’s parents, Max and Shahin Copeland, during what Copeland said “would turn out to be the most iconic disruption of our lives.”

That disruption was his father’s arrest during the 1979 Iran hostage crisis, and his mother’s mission to set him free. Copeland includes his mother and father’s perspectives in Off the Radar, along with his own — both in the moment and in 2012, when the book started to come together.

The book begins with Copeland and his mother finding a mysterious file about his father, which he said helped propel him forward in the writing process. He had a few starts and stops with the book before, he said.

“Since this story happened, I always knew that it was a very improbable story,” Copeland said. “And I also knew that I wanted to tell the tale, I just wasn’t quite sure how to do it.”

Including his own point of view in Off the Radar gave Copeland a way to explore the contradictions of his different heritages, he said. His father Max was American and his mother Shahin is Iranian. Writing gave Copeland a space to figure out what it meant to be an Iranian in America, be an American in Iran and be a Muslim anywhere, he said.

Copeland said he hopes to discuss those multiple perspectives with his presentation as a way to investigate the psychology of the relationship between Iran and America — both in 1979 and now.