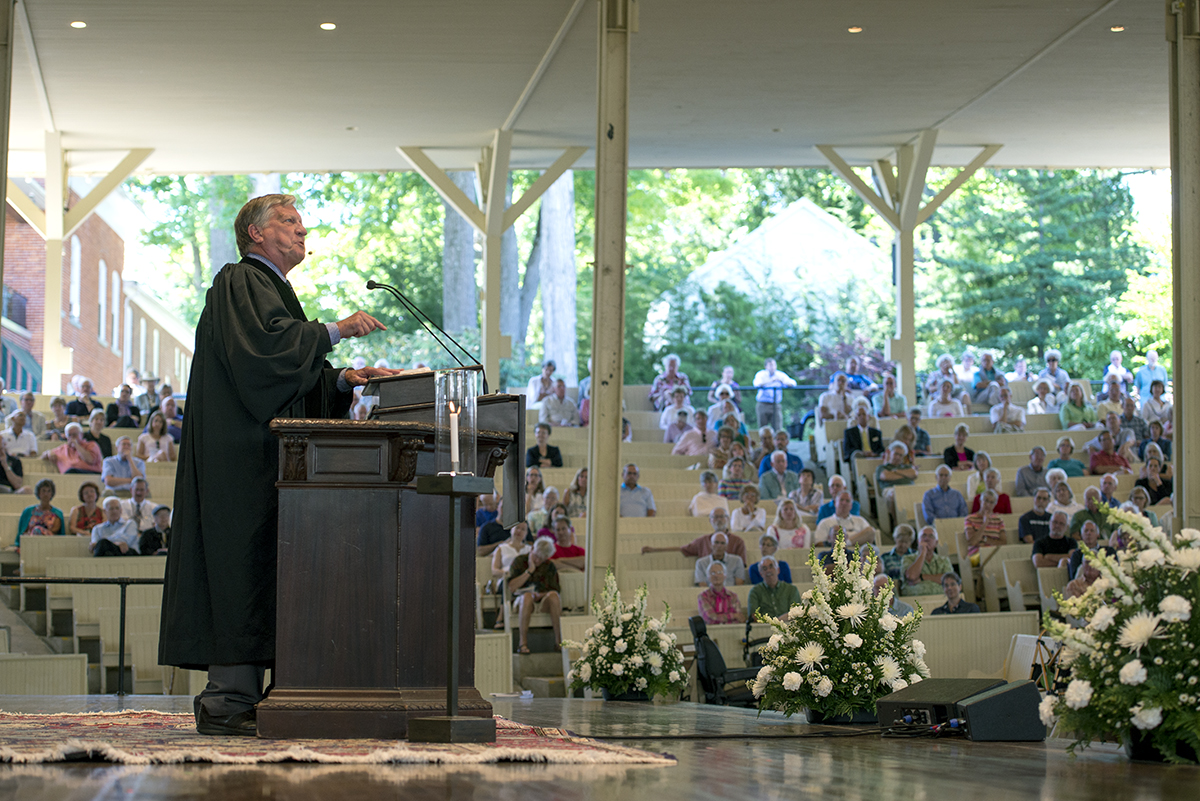 Week Seven chaplain the Rev. Thomas G. Long began the 9:15 a.m. Tuesday morning worship service with a short audio clip from a jazz album that featured a piano, played by Duke Ellington, and an upright bass, played by Ray Brown. The album was This One’s for Blanton, in honor of bassist Jimmy Blanton, who played with Ellington in the early 1940s.

“This is not simply marvelous music by incredible musicians. They set up the studio like a living room, placed the musicians next to each other and placed the microphones close, some say too close, so you can hear everything,” Long said. “You can hear Brown grunting, his hand moving up and down the board, the buzzing strings. You hear Ellington breathing, shifting on the bench and deep sighs. You hear the sound of the music and the sound of the music being made.”

He compared that to Mark recording Jesus as he performed the Gospel.

“He put the microphones close, too close some would say, and we hear [Jesus] sighing, grunting and spitting through the Gospel,” Long said. “This is not gentle Jesus, meek and mild; this is a sweaty, muscular, guttural, embodied Jesus.”

His sermon title was “The Sound of the Gospel,” and the Scripture reading was Mark 7:31-37.

In Mark’s Gospel, Jesus does not have just exchanges of points of view with his disciples — he expresses deep sighs of exasperation. His time in Gethsemane is filled with anguish and grief and his death on the cross is not quiet, but ends with a loud cry and a violent expulsion of breath.

“This is the sound of the Gospel being made,” Long said. “The work Jesus came to do was hard, back-breaking. He put his whole body into it and there were times that it was too much even for Jesus; he could do no mighty works in his hometown.”

Jesus is not simply a teacher in Mark’s Gospel.

“Jesus came to do battle with the powers of death that hold the world in thrall,” Long said. “Most of us are victims of the Stockholm syndrome, where the hostages came out praising their captors. So it is with all of us, we are in the grip of death and in its thrall. Jesus came to kick down the prison door and to snap the spine of the snake that is wrapped around us.”

Long talked about William Stringfellow, an attorney and lay Anglican theologian in the 1960s and ’70s who understood the language of principalities and powers and used those words to describe the infection of our politics, economics and religious institutions.

“When Stringfellow went to Washington, D.C., to protest the Vietnam War, he did not march in the street,” Long said. “He went to the gate of the White House and took out his prayer book and performed an exorcism of Richard Nixon. He knew that warfare is a power that holds us in its grip and we need to be delivered from it.”

Another time, Stringfellow was invited to speak at Yale Divinity School. The dean of the business school invited him to also speak there. Stringfellow chose to speak on principalities and powers but did not have time to write two speeches, so he gave the same one at both schools.

“The response at the divinity school was to decry his theology; ‘We have demythologized that and moved on,’ ” Long said. “At the business school, they knew exactly what he was talking about.”

Racism is rising in this country, he said, and it is not a matter of learning to behave better. It has infected our best institutions and they need to be liberated. People who have battled addiction know they are against a power they cannot break free from by themselves.

“Jesus came to do battle with the powers that hold us in their thrall,” Long said.

In Mark’s Gospel, when Jesus quiets the storm on the Sea of Galilee, he rebukes it.

“This is not some meteorological event on the Weather Channel, this is a theological event,” Long said. “To the chaos in the world, to events like the Holocaust, genocides and Orlando, Jesus rebukes and denounces the hell out of [them].”

While going to Jerusalem to die, Jesus told the disciples that there was a cost. Peter said no, Jesus should not do it.

“Jesus did not just chuck Peter under the chin and say, ‘there, there,’ ” Long said. “He said, ‘Get behind me Satan, you are not on God’s side here.’ ”

In the Scripture reading, a man who was deaf and mute was brought to Jesus to be healed. Long said one way to understand the story would be to be sorry for the man, happy for him that he was healed, happy for the community that they got to see his healing and be inspired to go out and do good works.

He said the man did not just have a disability. He was deaf in the way we are all deaf.

“He can’t hear what we are all called to hear that the time is now, the power of God is at hand and we need to repent and believe in the Gospel,” Long said. “This is not a disability, it is the human condition that we can’t hear the Gospel.”

Long said he knew what the Bible said about consumerism.

“It is an idolatrous power that tries to tell me what make life good, rich and deep. But when I am in Best Buy and see a 65-inch TV that says, ‘I can give you some joy,’ I know what the Bible says about trouble, that [when we are in trouble] the power of God is next to us shouting shalom,” he said. “When we look at our political landscape and see the brinksmanship and our churches that are getting grayer and smaller and we say to God, ‘Don’t you care that we are perishing?’ We can’t hear [the Gospel].”

Long said it would take a miracle for people to know and hear the Gospel. Jesus put his fingers in the deaf man’s ears and spit in his mouth and pulled his tongue and screamed “be open.” The man’s ears were opened and his tongue was loosened.

Long said one of his least favorite hymns was “I Come to the Garden Alone” because of its sentimental lyrics and “la-de-da tune.” He told a story about seminary professor and worship expert Tex Sample in one of his worship classes who was prancing around the classroom and making fun of the hymn. After class, a woman student came up and asked him never to do that again. She had been sexually abused by her father every night from the time she was 11 until she was 16. She told Sample, “Every night after he was done, I would go out into the backyard and sing, ‘And He walks with me, and He talks with me, And He tells me I am His own.’ ”

“How is it possible to hear the voice of Christ that you belong to me, body and soul, you are treasured? It would take a miracle, and that is what we get,” Long said. “No one is working in your life harder than the Risen Christ. Be opened so you can hear the sound that we are his own, body and soul.”

The congregation sat in silent response.