In the midst of the week themed “Pushing Our Bodies’ Limits,” the CLSC Young Readers will discuss a book about immortality: Tuck Everlasting, by Natalie Babbitt.

The Chautauqua Theater Company will guide the open dialogue at 4:15 p.m. in the Smith Memorial Library, asking the question: “If you could live forever, would you?” 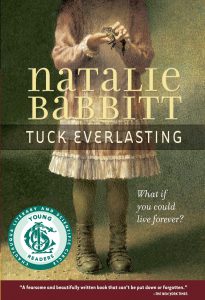 Spearheading the event will be CTC artistic associate Miryam Coppersmith, who will take young readers on a journey through the ideas of the book, using theatrical exercises.

Coppersmith is not in the conservatory as an actor, but she is no stranger to performing. Accompanying her will be a few other administrators from the theater who will shed their usual identities for the afternoon.

Coppersmith said she is excited to use the spaces of different parts of the library, which up until now, she has only experienced as a patron.

“My master plan is to be moving around the library, and we might go outside a little bit, too,” Coppersmith said. “We’re going to be playing some theater games.”

The week’s theme, Coppersmith said, ties into the theme of the book in an interesting way. In her theatrical past, she has explored transhumanist themes, which she said puts the idea of immortality into perspective both technologically and theologically.

“I’m interested in the aspect of immortality, and using theater to grapple with the question, ‘What would you do if mortality was a non-issue?’ ” she said.

“With advancements in biomedical engineering continuing to improve life expectancy, some scientists are speculating we’ll reach the possibility of immortality within our lifetime,” Ewalt said.

Kids will have varied opinions on the matter, and Coppersmith expects the age group will come with a lot of questions she has never considered.

“There’s bound to be someone who sees immortality as a great idea,” she said. “But there are going to be others who may question our habitats and resources.”

The discussion will be focused around real-world problems in the scope of life cycles.

“If the wheel stopped turning, and we kept producing more people, more organisms, we would run out of resources,” she said. “It’s a fun question to ask kids. There are a lot more issues with living forever than they think initially.”

The group will explore the issues in a physical way, using improvisation to tell a story with their bodies.

“We’re going to take the wheel of life and ask, ‘What does that mean?’ ” she said. “ ‘Can we make something that looks like a machine? Or a life cycle with our bodies?’ ”

She cited Tuck Everlasting’s detailed natural imagery as a chief part of its beauty.

“I think the book is such a beautiful story of discovery of why it’s a good thing to change and grow up,” she said.

Because the program is tailored for kids ages 9–13, the questions and discussion are especially relevant, Coppersmith said.

“I think it’s definitely a time for a lot of young people when they’re grappling with the idea of their own mortality,” she said, as by that age, kids have probably experienced a grandparent aging, or the death of a pet.

Ewalt said his department selects a classic work of children’s literature every year, to invite families to have a conversation about a book they are all familiar with.

With new content being produced for young readers all the time, Coppersmith said, it’s a special experience to have a book such as Tuck Everlasting that’s immortal in the sense that a child’s parents have probably read it.

“That line through generations of loving a story is what makes the book such a classic,” she said.