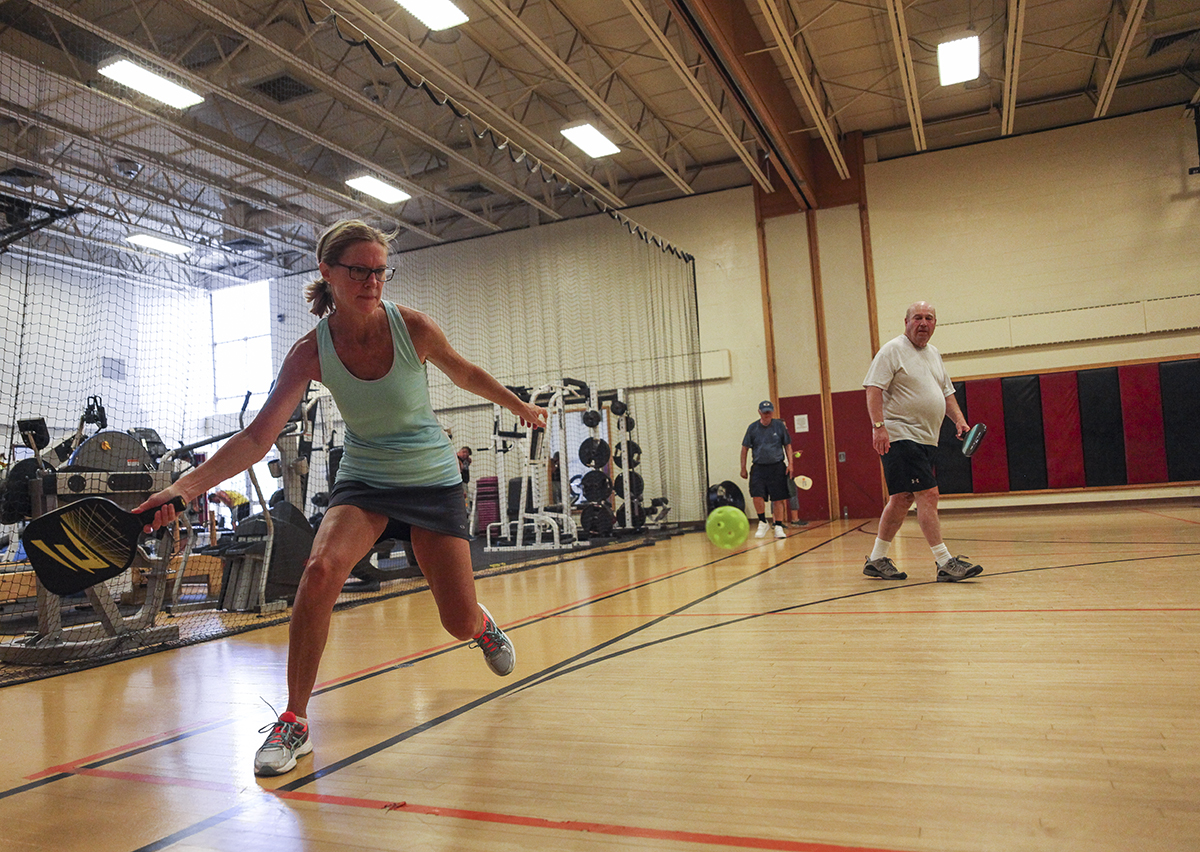 “We’ve been known as the Picklers or the Chautauqua Pickles, whatever you choose,” she said. “But we’ve become a very close-knit group. We’re social players as well as serious players.”

Evans is a part of a pickleball league that plays three times a week on the basketball courts of the Turner Community Center. Made up of year-round Chautauqua residents and summer guests, the league plays from noon to 2 p.m. Monday, Wednesday and Friday afternoons.

A mishmash of a couple different sports, pickleball has become one of Chautauqua Institution’s most popular summer activities. Played on a badminton-sized court, pickleball features a lower net, closer to tennis height, and includes specialized equipment, including the racquets and all-important pickleball.

“I don’t think there’s necessarily that same concentration that tennis [requires],” Evans said. “There’s a lot more volleys in this. You’re hitting it back and forth, back and forth a lot more than in tennis.”

Pickleball also doesn’t require the same kind of physical endurance as tennis, with shorter games played on a smaller court.

The game was invented somewhat by accident in 1965, when Congressman Joel Pritchard from Washington couldn’t find the necessary equipment to play badminton with his family. Improvising, he lowered the net on their badminton court, grabbed a Wiffle ball and fashioned a couple of plywood paddles.

“Most everyone has started in the last six to 18 months. When you reach your 50s, tennis can get to be a little challenging,” said pickleball player Cameron Morton said. “The majority of people played tennis, but actually, table tennis helps a lot because of the fast reactions.”

On a recent Friday afternoon at the fitness center, two games of pickleball were being played on the basketball courts. Mixed doubles seemed to be the most popular format, with long rallies capped off by dramatic winning shots. Unlike tennis, players don’t have to cover the length of the court and can effectively use an underhand shot.

Games are played to 11 and, in a rule unique to pickleball, players can only score when they are serving. That means that players must first “break” their opponents in order to retake service and gain the ability to win points.

“You have to be real strong. You just have to be agile,” Evans said. “That’s good for balance and coordination.”

Pickleball has become so popular among Chautauqua residents that Morton said the league was forced to start up a sign-up sheet for each day of competition and cap the number of players at 12 each day. The league also includes a thriving social component, with a different player hosting a party almost every weekend.

But how exactly did pickleball get its name?

Well, a popular rumor that the sport was named after Pritchard’s dog, Pickles, has sadly been debunked by family members. The name appears to come from a nickname for Washington fishing boats that would build a crew from the leftover members of other vessels, sort of like how the sport of pickleball came to be.

But no matter how pickleball got its name, Chautauquans can’t seem to get enough of the sport.

“Everyone loves it because there’s a lot of laughter,” Evans said. “It’s just a great group of people.”

For more information about the pickleball league, contact the fitness center at 716-357-6430.