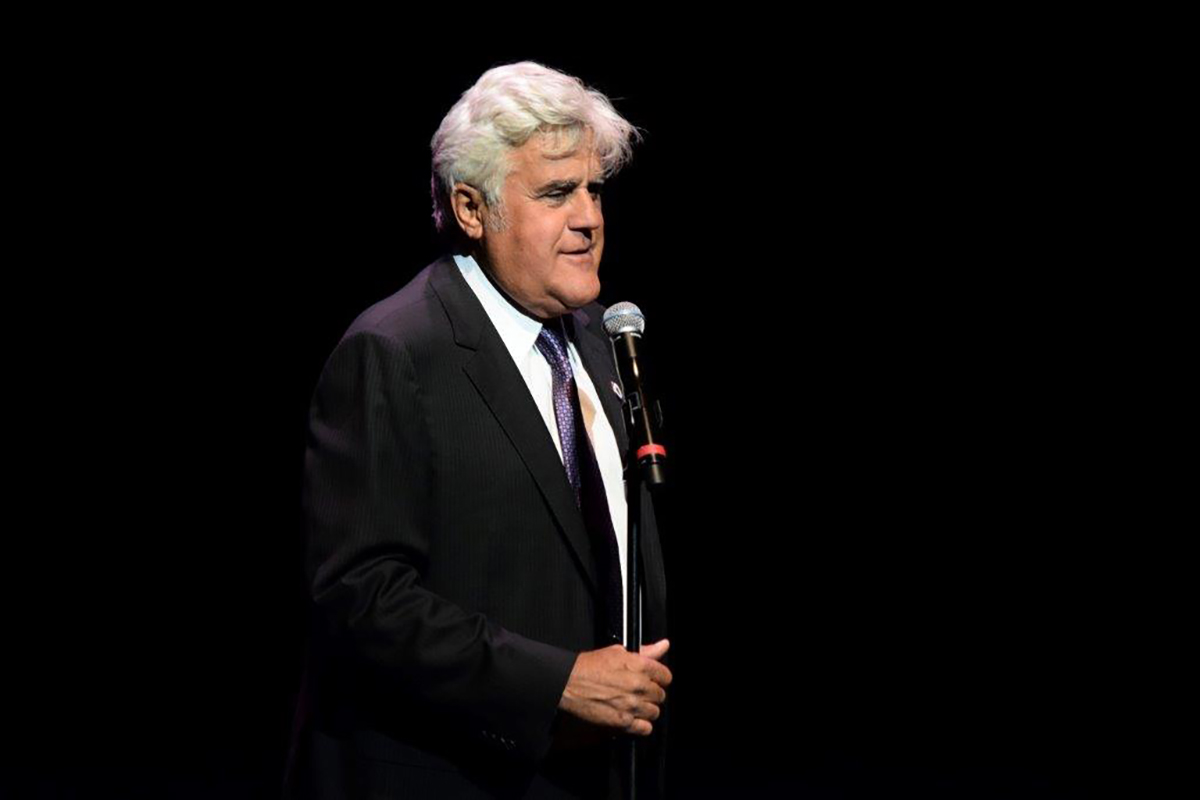 Jay Leno got his start in comedy performing at strip clubs.

He also played casinos, corporate events and college campuses. And, of course, Leno hosted “The Tonight Show” on NBC for more than two decades. These days, by his own count, Leno does more than 200 stand-up appearances in a given year.

“I guess I’m a populist type of comedian,” Leno said.

Leno will entertain Chautauquans at 8:15 p.m. Saturday from the stage of the newly rebuilt Amphitheater. He will be the first act of the season after singer Aretha Franklin canceled due to illness. Cleveland-based blues guitarist Austin Walkin’ Cane will perform an opening set starting at 7:30 p.m.

Leno said he’s never been the type of comedian who plays just one type of venue.

“We kind of live in an era where people find their audience and they just go there,” he said. “I like to play different kinds of audiences.”

Chautauquans may be more decorous than the crowds Leno entertained during his college years. The surroundings are certainly more idyllic. But as far as Leno is concerned, that doesn’t make a difference.

“You don’t prepare differently,” Leno said. “It’s not like you come out in a Nomex suit or something.”

Leno is very matter-of-fact about his work.

“As long as it’s got a sound system and people can hear, that’s really all you need,” Leno said.

According to Leno, most comics work that way.

“If the gig’s at eight o’clock and the plane lands at 7:30 and you get there a quarter to eight, you’ve still got 15 minutes to kill before you go on stage,” Leno said. “It’s really not that complicated.”

“Is it kids under 25? Is it older people? Is it a middle-class sort of audience with a mix of everything?” Leno said. “If it’s a family crowd, OK, you’re going to do this sort of stuff.”

After decades of experience with an array of crowds, Leno has learned to read the audience when he gets on stage. He anticipates having a good rapport with his audience Saturday, having grown up in similar surroundings.

“I came from a small town where once a month there was a town meeting, and the whole town would show up,” Leno said. “Nothing ever got done, but you got to interact with people.”

The last time Leno came to western New York, it was to headline the 2014 Lucille Ball Comedy Festival in Jamestown.

“I’m not a New York City guy. I like towns that are kind of half rural, half city,” Leno said. “That’s where I come from.”

That might partially explain Leno’s attraction to cars. (His CNBC show, “Jay Leno’s Garage,” will debut its third season in a few days.) Leno said he enjoys towns like Buffalo that have big industrial backgrounds.

“I’m a big car guy. Pierce-Arrow cars. I like the history of that town,” Leno said.

No matter where he’s performing, Leno believes comedy’s primary purpose is to bring people together. Shared experiences between the comic and the audience are what make humor possible.

“Comedy is funnier when you share it with other people,” Leno said. “I’m sure you can sit in a room and laugh by yourself watching something. But it’s not nearly as much fun as being in a crowded room and people are laughing around you.”

Leno has mixed feelings about new ways of communicating that are ostensibly designed to bring people together. On one hand, more people can use the internet to access ideas from outside their immediate social circles.

“Everyone has access to the same information now,” Leno said. “The idea that you go to the Midwest and there’s people in mountain bib overalls with a piece of straw in their mouth, that doesn’t happen anymore.”

On the other hand, digital communication sometimes becomes a surrogate for face-to-face interaction.

Still, live comedy seems to be rising in popularity.

“I see more and more new stand-ups coming up all the time,” Leno said. “It sort of gets reinvented.”

Leno observed that different types of comedy still rely on “one human being communicating with other human beings” about something to which they can all relate.

“With stand-up, it’s the most basic kind of communication there is, with the exception of the microphone,” Leno said. “That’s the only new element to it.”

It’s impossible to know exactly what Leno will talk about at any given appearance. He might comment on American life in general, cars, or people you run into at the grocery store. He might talk politics, though likely not as much as other comics.

Whatever stories he decides to tell from the Amp stage, they will be pure, undiluted Leno.

“You just show up, and you start talking,” he said.