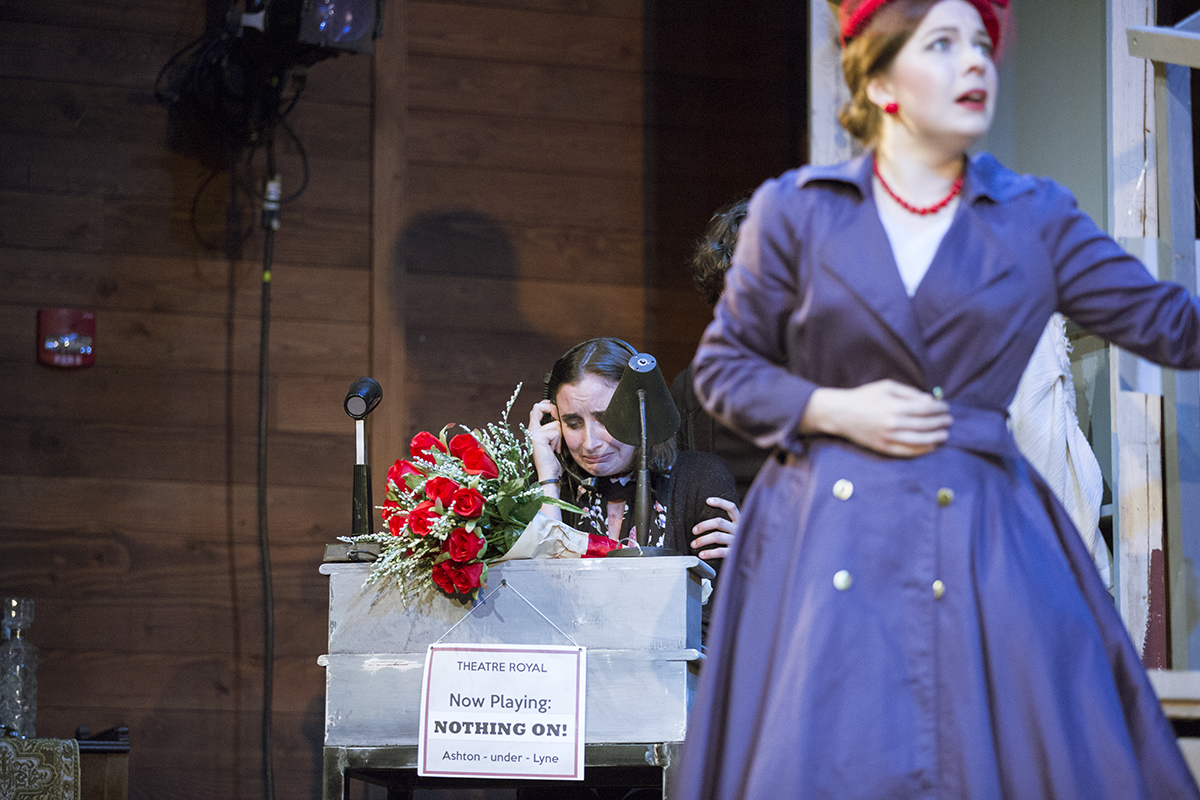 Emily Daly; center, performs a scene during a dress rehearsal for Chautauqua Theater Company's production of 'Noises Off' in Bratton Theater on June 29, 2017. 'Noises Off' is a play within a play, and it kicks off the 2017 CTC season at 8 p.m. on June 30, 2017. CAM BUKER/STAFF PHOTOGRAPHER

Will Harrison has never been a stage manager in real life, but he’s getting a chance to see what the job is like, thanks to Noises Off.

“I am blessed that I don’t have to be the stage manager for this show, I just get to play one, because they have a bigger job than any of us,” said Harrison, an actor in Chautauqua Theater Company’s conservatory. “There are so many props, and so many sardines, and it is really out of control.”

Backstage is onstage in Noises Off, the English farce from playwright Michael Frayn which opened the 2017 CTC season Friday night, resumes 4 p.m. Wednesday in Bratton Theater, and will run through July 16. The title of Noises Off refers to offstage sounds that audience members are intended to hear, and the show follows a trainwreck production of the fictional play Nothing On.

Harrison said Tim, the stage manager of the ill-fated Nothing On, is “trying to hold this world together.” Although his title is stage manager, the script suggests Tim is a one-man band, taking on the duties of carpenter and understudy.

“I remember in our first read, going over all these jobs that Tim has, and we were all kind of mindblown that they didn’t have a bigger crew on this, this kind of just rests on Tim and Poppy’s shoulders,” Harrison said, referring to the assistant stage manager character.

“The chaos that you are coming to see onstage, and will certainly see onstage, the thing to know is that it is carefully, carefully constructed by a huge team of people who have put in so much work to give the illusion of chaos,” Harrison said.

That chaos ranges from actors running around with plates of sardines to a scene in which Harrison’s character grabs an ax to break down a door. According to theater history, Noises Off was born out of an idea playwright Frayn had while watching a real farce from backstage. With each act of Noises Off, the set rotates, so audiences see the characters performing to the audience and the hilarity happening backstage.

CTC recognized members of the cast and production team during a Brown Bag lecture at Bratton Theater on Thursday. The discussion let audiences in on some of production’s challenges, like lighting designer Scott Bolman’s task of lighting the backstage set. In a true theater setting, a backstage wouldn’t have direct light, but when the backstage is onstage, actors need to be seen.

For Chautauquans still interested in learning how CTC shows come together, there will also be a free behind-the-scenes tour of Bratton on July 11, where CTC’s production leaders and design fellows will guide patrons through the set, costumes, lighting and special effects.

Emily Daly, the CTC conservatory actor who portrays Poppy, said she doesn’t have the organization or patience to be an assistant stage manager in real life. Part of the backstage set is what Daly described as a realistic communications console, and part of Poppy’s costume is a headset and working mic.

“Our stage manager has been really helpful with me, telling me what things are actually accurate and how it really works, so that’s been a really great resource to have in the room with me,” Daly said.

Life may imitate art, but that’s not to say Noises Off is a true representation of what happens in a theater. Craig Wesley Divino, one of CTC’s guest actors, portrays Lloyd, the director of Nothing On. Although he has directed himself, Divino said Lloyd isn’t a copy of what he’s like as a director in real life.

“I hope not,” said Divino, who has directed mostly classical plays. “I think I’m a little nicer.”

Divino said it’s a luxury to have experience onstage and off. In a way, audiences who haven’t worked behind the scenes on a show get to experience the production process through watching Noises Off.

“It’s cool as an audience to come in and see the action of making theater,” Divino said. “Even if it’s staged, even if it’s a comedy, even if things go wrong, the activity is real.”