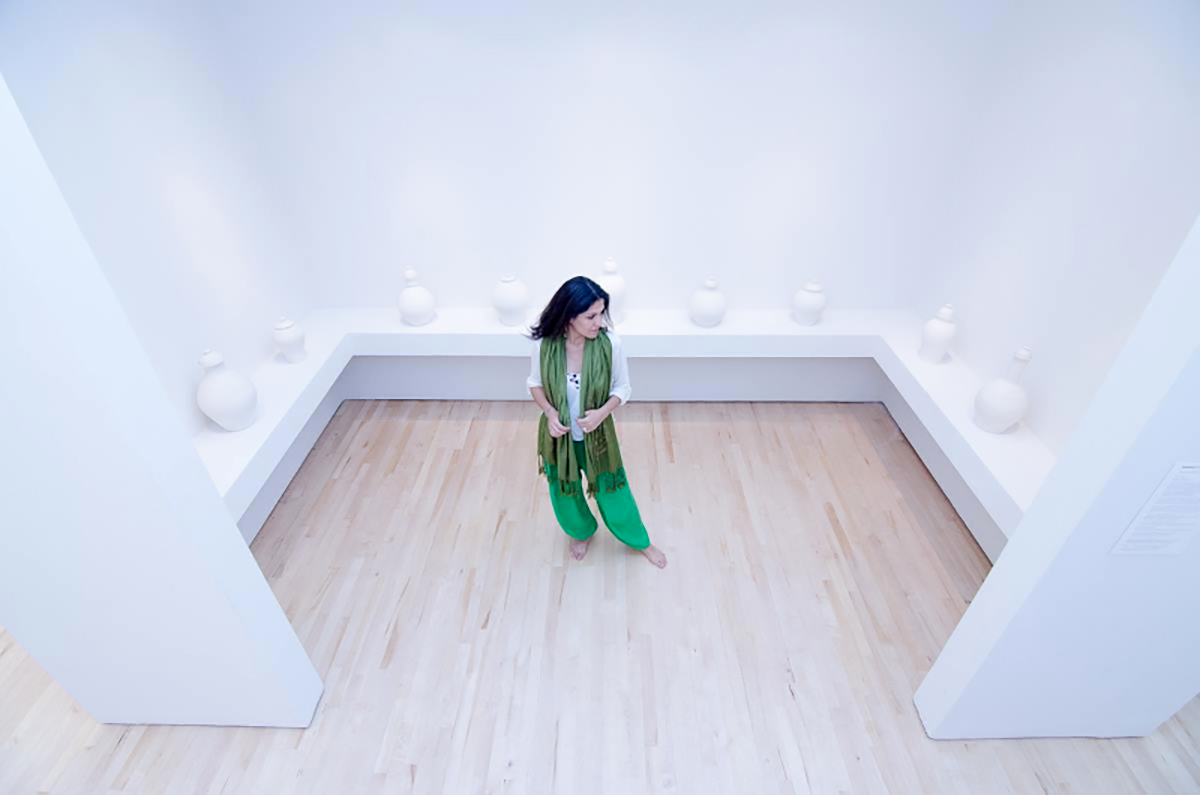 Raheleh Filsoofi stands with her installation piece "Only Sound Remains," in 2014.

With several upcoming exhibitions in progress, Raheleh Filsoofi drove 17 hours over the course of a few days, traveling from Providence to D.C. to Buffalo, before finally landing in Chautauqua on Sunday.

After a two-week breather teaching ceramics for the Visual Arts at Chautauqua Institution’s School of Art, she’ll be on the move again, this time to visit her birthplace, Iran.

“The meaning of my name is ‘someone who travels a lot,’ ” she said. “I think I became the definition of that name.”

In her lecture “An Ear for the Unexpected” at 7 p.m. Friday in the Hultquist Center, Filsoofi will focus on a few of her major installation pieces and how they relate to her past and her experiences. She will show videos of her works “Only Sound Remains,” “Imagined Boundaries” and “Soliloquy: the chant of forbidden women.”

Filsoofi, assistant professor of ceramics in the School of Art at the University of Texas Rio Grande Valley, lived in Iran for 25 years before immigrating to the United States 15 years ago. There were many reasons to move, but one was to satisfy her spirit of exploration. Coming to the United States was her chance to experience the “other side of the world,” she said.

She’s also an explorer in her artwork.

“I don’t like limitation,” she said. “I have to cross the boundary between all these mediums and concepts.”

“Clay has a cultural reference in my work; Iran is well known for its pottery and ceramics,” she said. “Since my work is related to my culture, mostly, it becomes a venue for me to speak my culture through.”

Even so, she knew she couldn’t make tiles for the rest of her life. She learned sculpture, to throw pots on the wheel and, most recently, began incorporating elements like audio and video into her pieces.

“I somehow felt clay by itself, maybe it’s not helping me to talk about all those experiences that I want,” Filsoofi said.

Working in multimedia gives her more ways to communicate. An installation that combines audible and visual aspects builds a “very rich” experience for the viewer, she said.

She created one of her first pieces to incorporate audio, “Only Sound Remains,” in 2014. It was a small, intimate white room filled by sounds coming from 11 large white jars on a low ledge. In a video of the piece, Filsoofi enters the room and lifts the lids of the jars one by one. The outpourings, released from their enclosures, expand: people walking in the street, a marketplace, Filsoofi’s mother leaving her daily phone message, an explosion, traditional songs played by Filsoofi’s musician husband.

Filsoofi sees her artist’s duty as being a cultural bridge. She said many Iranians who saw “Only Sound Remains” reacted emotionally, even cried, at hearing the familiar sounds. Non-Iranians were given an invitation into Filsoofi’s world.

“It made them curious to learn more, and then to listen more,” she said.

Yet Filsoofi, who by her own admission can be a private person, said sharing those experiences is often challenging.

That story, like her lecture, is about the human condition.