There are many aspects to a professional musician’s career: performing in orchestras, playing chamber recitals, accompanying operas and, often times, coaching young talent.

At Chautauqua Institution, they get to do it all.

“When I was a student I thought, ‘I’ll be an orchestra musician and that’s it,’ ” said Simon Lapointe, Chautauqua Symphony Orchestra violinist. “Years later, I’m doing all these different things … in all different styles.”

Lapointe is part of a chamber trio, along with Martin Dube, Voice Program faculty member, and Mark Robbins, CSO French horn player, that will perform in a brief recital at 4:30 p.m. Sunday in Smith Wilkes Hall. The main piece the musicians will be playing is Brahms’ trio for piano, violin and horn. Other pieces in the recital include Carl Nielsen’s Canto Serioso for horn and piano, Rheinhold Gliere’s Nocturne for horn and piano, and Wolfgang Erich Korngold’s suite from Much Ado About Nothing.

“Most composers wrote tons of piano trios for violin and cello,” Lapointe said. “You would think in this case, in a horn trio, most of the spotlight would be on the horn, but he really did a great job featuring all three of the instruments.”

Despite their schedules already busy with programming, the musicians decided to put together the chamber recital to add to their performing experience this summer. The idea came about when Robbins heard a quartet from the CSO play in Smith Wilkes Hall and realized the acoustics were ideal for chamber music. He said the hall is like a “mini Amphitheater.”

Lapointe said that Dube joined the trio though a “happy coincidence.” One of Lapointe’s accompanists back when he was a student is now one of Dube’s colleagues. The mutual connection put the men in touch, and Lapointe said he’s been having a great time since rehearsing as a trio.

The musicians said that at Chautauqua, there is a tight-knit community of musicians and of supporters. In addition to high attendance at events, Lapointe said the audience is knowledgeable and follows programs closely. He said that they’re not “just there to pass time,” and get quite involved in the events.

“I love orchestra music, too, but chamber music is a whole other level,” Robbins said. “It’s so intimate working with a few people and there’s so much amazing repertoire written for smaller ensembles.”

Dube said that putting together the chamber recital also offers an opportunity for the musicians to learn and grow as artists. Chautauqua supplies musicians with a setting to collaborate with musicians from all over the country and world.

It’s an opportunity that doesn’t go unrecognized by Sunday’s performers.

“Especially here, the level of playing is so great I sometimes think how lucky I am to be here and work and make music with these people,” Lapointe said. “I’m still learning; I think that’s never going to end. To learn how to become a better musician and really a better human being surrounded by all these people here.” 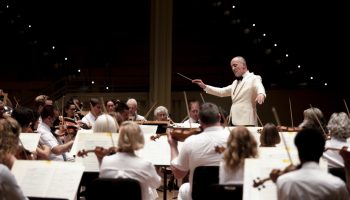 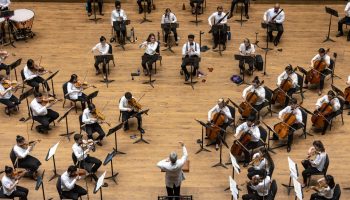 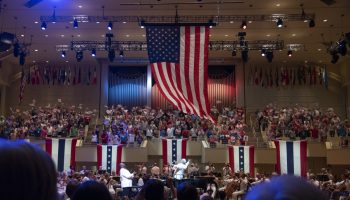