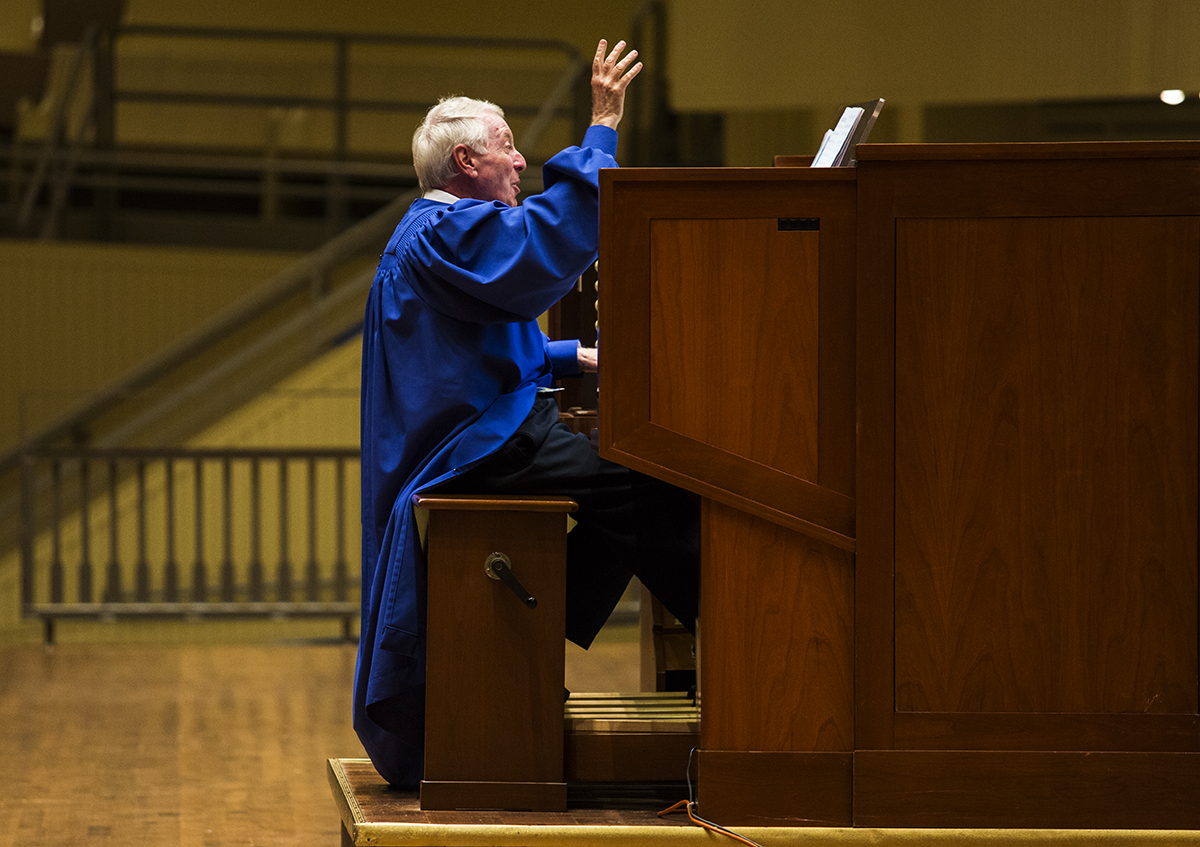 Jared Jacobsen, organist and coordinator of worship and sacred song, conducts the Chautauqua Choir during the Sacred Song Service on Sunday in the Amphitheater. Jacobsen will perform the last Massey Memorial Organ recital of the season at 12:15 p.m. Wednesday in the Amp. ERIN CLARK / STAFF PHOTOGRAPHER

The menu has been set. The instrument has been polished, and the chef is prepared.

This isn’t a fine dinner at the Athenaeum Hotel. Rather, it is Wednesday’s Massey Memorial Organ concert, and the four courses are fine classical music pieces. The concert will take place at 12:15 p.m. Wednesday in the Amphitheater.

“I do this every week when I do a concert here,” said Jared Jacobsen, organist and coordinator of worship and sacred music. “I invite all these people to my table, which has a pipe organ in the middle of it.”

Jacobsen is a cookbook enthusiast and said he owns hundreds of them, but rarely is able to cook elaborate meals. He said he was excited to be able to craft an organ concert for Week Nine when he learned it would be based around food.

Planning an organ concert is a lot like planning a menu, he said. The quantity and tone of pieces must be considered, as well as the length and complexity.

The appetizer, Jacobsen said, should be something “that’s not always easy to make, but it’s easy to eat.” That means the music will be labor intensive for Jacobsen, but easy for the audience to enjoy.

“Ride of the Valkyries” by Richard Wagner will be the more intricate appetizer, Jacobsen said, while “Rialto Ripples” by George Gershwin will be the cheese and crackers. The salad will be different, though, Jacobsen said.

The fugue Jacobsen chose is something light and fun, he said. He called the song, “Fugue a la Gigue” by Dietrich Buxtehude, a “sailor’s jig.”

The entrée, on the other hand, is what one chooses to show off, Jacobsen said. People will be excited about it, but it’s more important that the guests know how much love went into the meal. This concert’s entrée is a section of “Ad nos, ad salutarem undam” by Franz Liszt, one of Jacobsen’s favorite large-scale choral works.

The dessert — Jacobsen said every good cook leaves room for dessert — is “Liebesfreud” by Fritz Kreisler. Jacobsen described the piece as the whipped cream on top, which is how planning this concert was for him.

“This is a gift to be playing a concert in the middle of a week on food,” Jacobsen said. “So move over, Jacques Pépin, I’m about to do the same thing on the organ.”

Chautauqua Conversations: Laura Currie reflects on board of trustees service and Chautauqua’s future