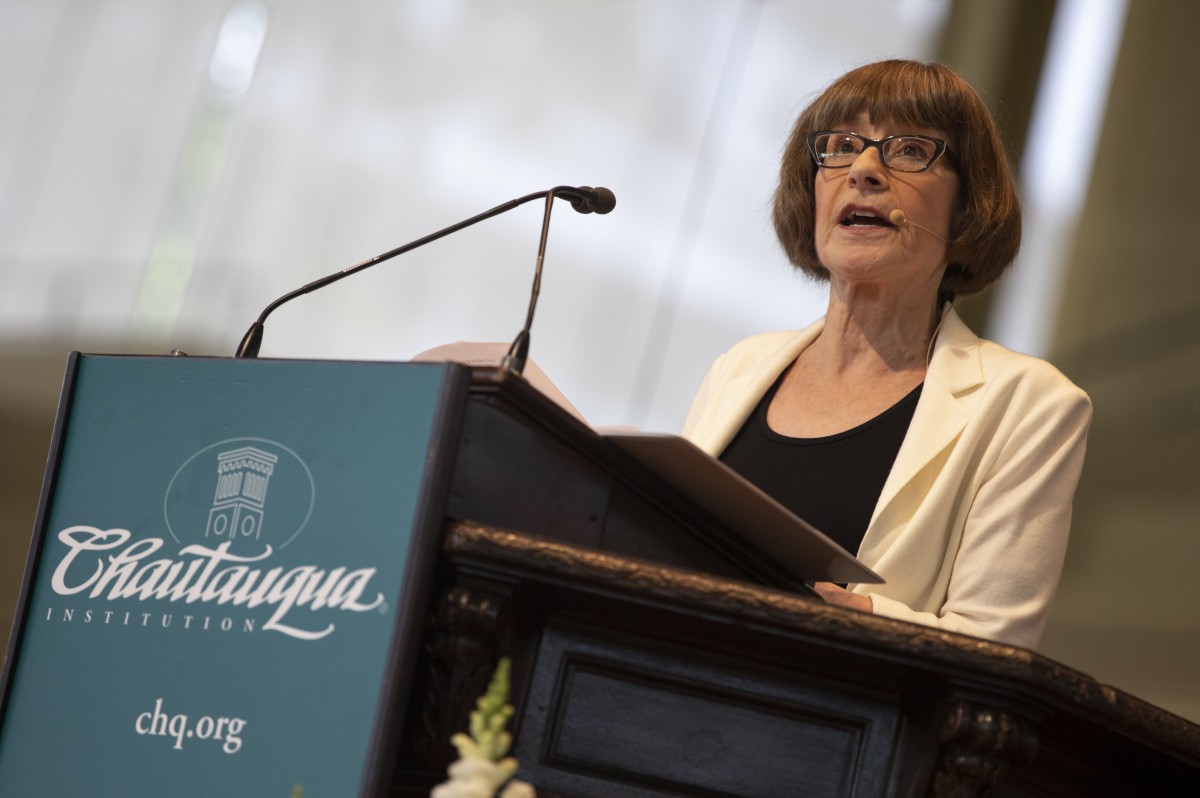 Sara J. Bloomfield spoke to collective and individual memory in relation to history at the 10:45 a.m. morning lecture Monday, Aug. 13, in the Amphitheater, opening Week Eight’s theme, “The Forgotten: History and Memory in the 21st Century.”

“Memory is important, necessary, complicated,” Bloomfield said. “It’s a very powerful force that speaks to our deepest notions, and its power is insufficiently understood. The world is  complex, messy, mysterious, evolving and often cruel. We all use narratives to create meaning and help us navigate this world. Narratives give order to disorder. … Memory is a form of narrative, a way we package the past in order to ease the present and make it more useful for the future.”

As director of the U.S. Holocaust Memorial Museum in Washington, D.C., Bloomfield is a curator of such memory; her institution raises awareness, deepens understanding of the Holocaust’s lessons, and advances genocide prevention efforts. She joined the museum in 1986, holding a number of positions prior to director.

Bloomfield said memory is practiced in a variety of ways: monuments, museums and religion. It is exercised through religion by recounting Biblical or spiritual events like the celebration of Passover, when the Jewish people were liberated from slavery in Egypt, or Easter, when Christians recognize the resurrection of Jesus Christ.

Museums serve as vehicles for memory; each institution honors its history in unique ways, she said. The Smithsonian Institution’s 1994 exhibition on the Enola Gay, the B-29 bomber airplane known for dropping the atomic bomb on Hiroshima, was met with backlash. Critics said the exhibit was sympathetic to the Japanese and did not distinctly explain the justification for the bombing, nor did it honor fallen American soldiers.

Critics expected a display that reflected their memories of WWII, Bloomfield said; curators wanted to honor those memories while accurately portraying history.

Bloomfield, who was consulted on the National September 11 Memorial & Museum, said she opposed the memorial’s construction because it was too recent. The Sept. 11 memorial opened 10 years after the tragedy; the museum followed three years later. The U.S. Holocaust Memorial Museum, comparatively, opened five decades after WWII.

“If the Holocaust Museum had opened in 1958 rather than 1993,” Bloomfield said, “I suspect it would have been a very different institution, shaped by the freshness of the survivors’ memories from the old country, the need of the survivors to rebuild their shattered lives in a new country and America’s focus on the Cold War.”

A difficult issue for the Sept. 11 memorial was the inclusion of the perpetrators, she said, which the museum has limited to one section. The U.S. Holocaust Memorial Museum is also selective in its commentary, but the museum asks a greater question — “What made the Holocaust possible in an advanced, educated nation with a democratic constitution, a rule of law and freedom of speech?”

The National Museum of African American History and Culture offers a unique perspective on the role of memorials in history; the museum abstained from using the term “memorial” in its description, instead opting for a “contemplative court” experience so visitors can reflect on its documentation of African-Americans’ lives throughout centuries, including exhibitions on slavery and the civil rights movement.

Bloomfield reflected on the role of monuments in the Civil War, quoting author and historian Drew Gilpin Faust:

“A war about union, citizenship, freedom and human dignity required that the government attend to the needs of those who had died in its service. … National cemeteries, pensions and records that preserved names and identities involved a dramatically new understanding of the relationship of the citizen and the state. … By the end of the (19th) century, the dead had become the vehicle for a unifying national project of memorialization. Civil War death … belonged to the whole nation. The dead became the focus of an imagined national community for the reunited states.”

By the end of the Civil War, Bloomfield said, Confederate General Robert E. Lee denounced the erection of war memorials and monuments, so as “not to keep open the sores of the war,” but many in the South never fully embraced his call.

President Ulysses Grant later acknowledged the South’s unwillingness to forget the war, Bloomfield said, amid growing nationalism in Europe and mass immigration, which revitalized racism, xenophobia and anti-Semitism in the United States; between 1905 and 1915, more Confederate statues were commissioned than any other point in history.

“German leaders hid the truth of the war from their citizens, which meant that a population who — in 1914, full of national pride and unity, expected a glorious victory — in 1918 was suddenly presented with a very different reality: defeat, division, humiliation,” Bloomfield said. “The trauma of the war and (the Treaty of Versailles) would feed a new narrative that appealed not only to nationalists, but also to the middle classes.”

“All nations use memory and history to articulate and reaffirm their values, identity and compass,” Bloomfield said. “ … Totalitarian ideology depends on total control of national memory in support of their singular idea that explains and ultimately fixes all human problems. For the Nazis, it was race; for the communists, it was class; and for Islamic fundamentalists, it’s religion.”

The Soviet Union controlled memories of WWII, Bloomfield said, by denying collaborating with Nazis in the division of Poland; investing in monuments and museums to promote Soviet victory; and denying the murder of thousands of Poles. Instead, the Soviet Union presented the war as a “titanic struggle between fascism and communism,” she said.

Lithuania dedicated a museum to the Holocaust and the fall of communism — two events the country perceived as equal. Ninety percent of Lithuania’s Jewish population was killed in the Holocaust at the complicity of many Lithuanians. Bloomfield played the testimony of a 20th-century Lithuanian mass executioner.

In the video, the man described leading Lithuanian Jews to mass graves and shooting them one bullet at a time. He described parents’ attempts to protect their children, only to be executed themselves; the ex-militant said it was humane to kill the parents so they wouldn’t experience the trauma of their child dying in their arms. When asked if he told his children and family about his crimes after the war, the man said “no,” that it was “shameful and scary” to tell them.

Bloomfield shared a letter from a 19-year-old Jewish man who buried a letter among treasures in the Warsaw Ghetto amidst impending deportation. It read:

“What we were unable to cry and shriek out to the world, we buried in the ground. … I would love to see the moment in which the great treasure will be dug up and scream the truth at the world, so the world may know all. … We may be the fathers, the teachers, the educators of the future, … but no, we shall certainly not live to see it, and therefore I write my last will: May the treasure fall into good hands, may it last into better times, may it alarm and alert the world to what happened. We may now die in peace. We fulfilled our mission. May history attest for us.”

Even threatened by death, the people of Warsaw left remnants of themselves and their cultures for the future; they saw themselves as part of history’s continuity, Bloomfield said. To close, she left the audience with a question:

“What are we as individuals and communities doing to ensure that continuity so that future generations can responsibly handle the obligations and challenges, as well as the complexity and power of history and memory?”

After the conclusion of Bloomfield’s lecture, Chautauqua Institution President Michael E. Hill opened the Q-and-A by asking how the U.S. Holocaust Memorial Museum will continue to tell its story without living survivors of the Holocaust.

Bloomfield said the museum is aggressively collecting testimonies from survivors as well as Nazi sympathizers and officers, but “you can’t replace survivors.”

Hill then turned to Twitter: the question asked how to use museums to teach accountability.

“I believe accountability is just one part of it, but remembering history and education have to be a part of accountability,” Bloomfield said.