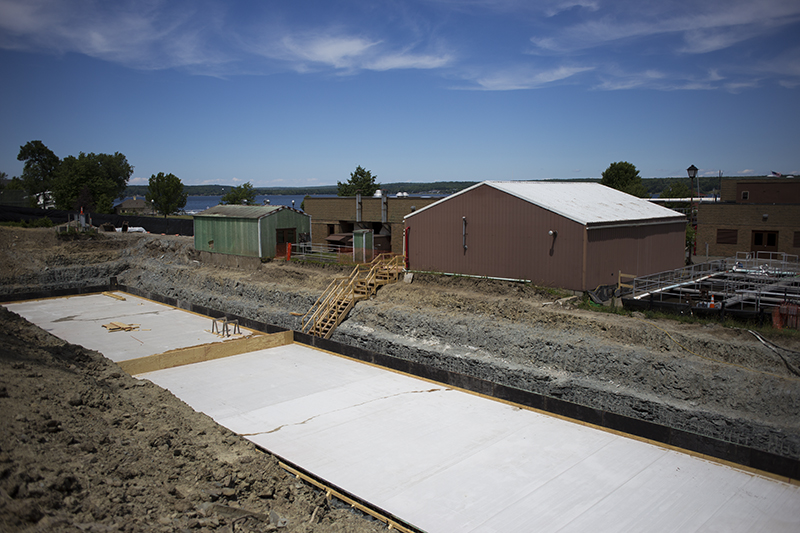 After delays totaling an entire calendar year, the multimillion dollar upgrading of the Chautauqua Utility District wastewater treatment plant is moving ahead and is back on schedule to come online next year.

In August 2014, Chautauqua Institution voters overwhelmingly approved an $8 million bond issue for the plant at the south end of the grounds. Ground was broken, and work actually began in early April this year. There is a big hole in the ground uphill from the current plant on Bryant to prove it.

As with the much larger Amphitheater renewal project, major work on the plant will now be suspended until the 2016 season concludes in August.

Eight months of the lengthy gap between voter approval and groundbreaking were absorbed by engineering studies, pre-bid conferences and other essential elements of a major public works project such as this one, said CUD supervisor Tom Cherry.

“The remaining 12 months of delay were partly due to problems with backlogged projects of the CUD’s engineering firm, Nussbaumer & Clarke of Buffalo. Five more months were lost in the bureaucracy of the New York State Department of Environmental Conservation,” Cherry said. “The [staffer] who had been handling our application retired and this triggered other delays.”

“They are fantastic engineers,” Cherry said. “We have absolute confidence in them.”

Though the project delays were frustrating for CUD operating staff and commissioners, Cherry said that due to unpredictable timing, a mild spring and simple serendipity, the overall project is only insignificantly behind where it would be without the delays.

The impetus for the sewer plant project was a Clinton administration clean water mandate for reduction by June 2018 of phosphorus and nitrogen levels in effluent from sewer plants into lakes and rivers. But much of the plant’s heavy equipment is also currently operating on borrowed time, as it has significantly exceeded its expected 30-year life span.

The big, visible project development this spring is the excavation for a new aeration system, which will eventually serve to consolidate two steps in the processing of kitchen and bathroom effluent into clean effluent to Chautauqua Lake. The hillside excavation is now complete, and the concrete base pad is in place. After this season, 26-foot-high concrete walls will encase the new aeration system.

In other parts of the complex, some buildings will be repurposed, and obsolete equipment will be taken off-line and removed.

Cherry said the current $7.5 million estimate includes all engineering, equipment and construction charges. Assuming the current bond market conditions persist for the next couple years, he estimated that an average Chautauqua property owner’s ad valorem tax bill would rise by about $375 per year for the 30-year term of the bond. That figure is largely unchanged from original estimates two years ago.

Still, Cherry said, property owners won’t experience any tax hike until at least 2018. He said the Chautauqua Institution, as well as other property owners served by the new plant, would also be paying increased taxes.

For several years, there has been a community garden on the hillside above the sewer plant. Cherry said that garden has been displaced by the aeration system construction work, but contractors will rebuild and improve the garden when site landscaping is finished next year. That will include spreading 2 feet of rich topsoil over the rebuilt garden and installing a special water hydrant for the garden.