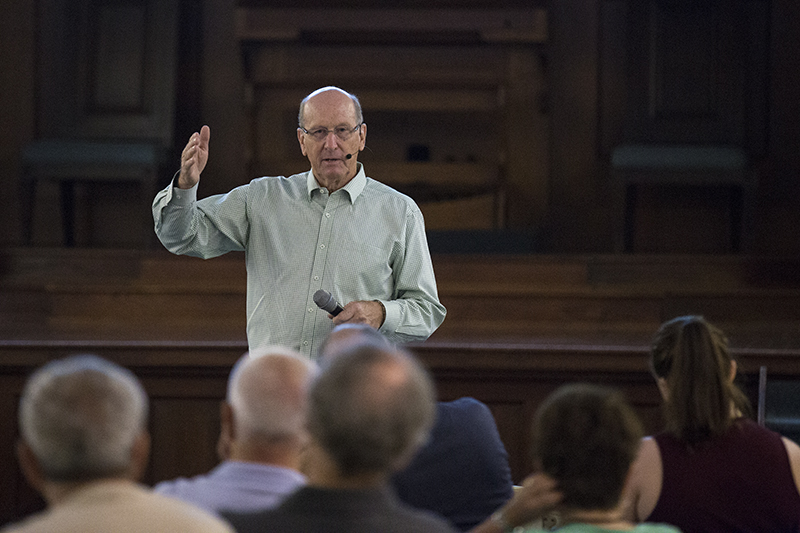 It was all about the numbers in Monday’s Chautauqua Institution Board of Trustees meeting with community members.

Board member Ron Kilpatrick facilitated the Trustee Conversation on “Chautauqua’s Sustainability” in the Hall of Christ, a presentation and conversation that walked through finances of the Institution. Kilpatrick is chair of the board’s asset policy committee as well as a member of the nominating and governance committee.

The main focus of Kilpatrick’s presentation was how the board and other Institutional entities are working to make Chautauqua sustainable, which Kilpatrick said in “shorthand what that really means is Chautauqua has to be here forever.”

“If you start thinking about it in those terms — Chautauqua being here forever — it sort of changes your mindset, changes the way you look at yearly performance, long-term performance and it gives the board a way of measuring itself,” he said.

Kilpatrick went through slides showing the financial planning models, jumping between revenue, expenses, gains and losses throughout the years.

In making the Institution financially stable, Kilpatrick said, the goal is to leave a legacy for years to come — a negative legacy entails financial losses, and a positive one includes financial gains.

Kilpatrick said although the biggest losses in the Institution’s history have been said to occur during the Depression and 1970s, the struggles have not stopped. With what looked to be a negative legacy in the early half of the 2000s and the 2008 recession, making up for potential losses has been key as of late.

To combat that, Kilpatrick said the board changed the way it calculated depreciation to better understand the costs of facility upkeep and construction. It also decided to hold back on building new structures and focusing on maintaining what currently exists.

Kilpatrick said some renovations that have been done, however, will rarely be noticed, including the new roof on the Chautauqua Bookstore and Post Office Building and sprinkler system in the Athenaeum Hotel.

But now, the board has a new mentality on building new structures.

“We developed a new philosophy that said all new buildings had to be done by philanthropy only,” Kilpatrick said.

Total Institution revenue, Kilpatrick said, is about a 70-30 split between earned revenue and philanthropy.

Now, with the Amphitheater renovations added to that equation, that ratio would completely flip. Construction has started on the $41.5 million project, raised in capital gifts, with supports drilled into the ground prior to the season starting.

The last part of the event focused on questions from the community. Property owner Steve Davies asked how much of the pledges for the Amp have been paid. Kilpatrick said about $12 million has been paid, and he expects the rest to come in. For now, the Chautauqua Foundation is providing the rest of the funds and is allowed to take out a loan while the Institution is not.

Norton Hall and future building plans were also discussed. Kilpatrick said funds are not currently in place to renovate Norton, but he is pleased with using the Amp for opera performances for now. Although there are no concrete plans for Bellinger Hall, Kilpatrick said it is on the radar for upgrading renovations.

The next board meeting with the community will be held 9 a.m. July 6 in the Hall of Christ. It will be facilitated by Tim Renjilian, a board member and vice chair of the program policy committee.