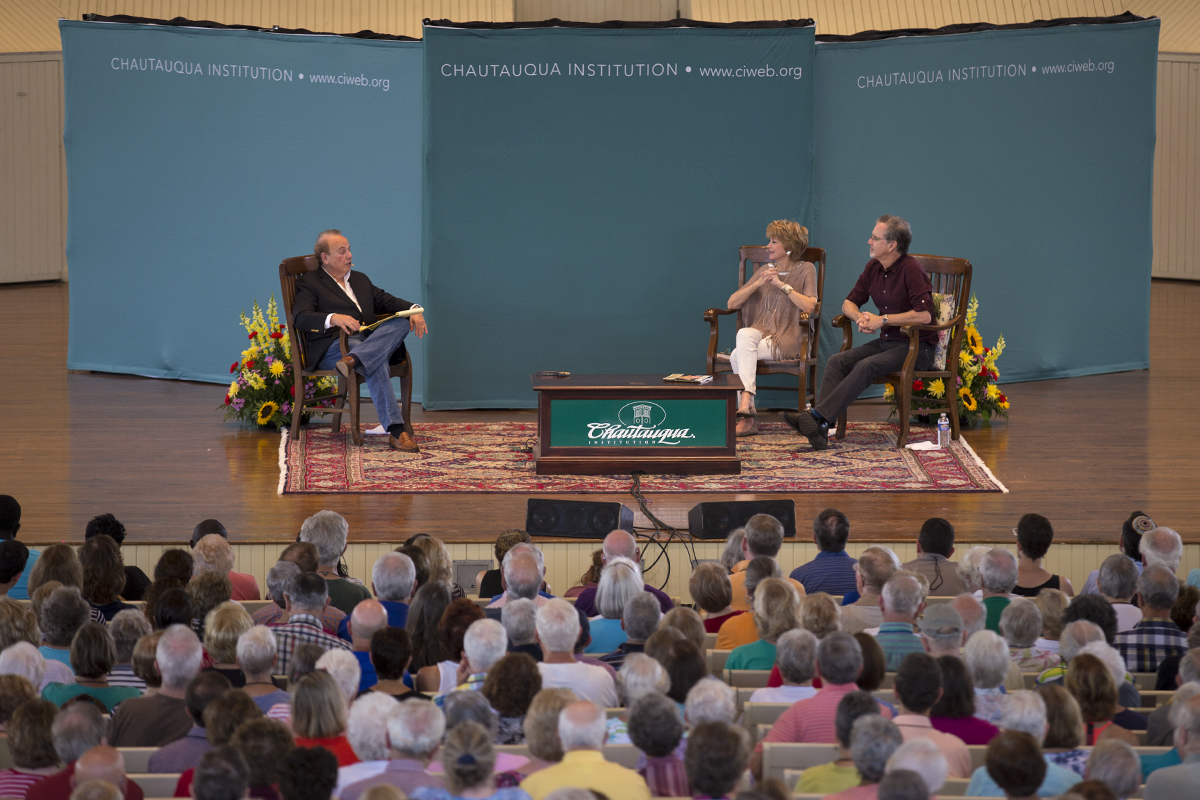 In the age of Twitter and WordPress, where anyone with a laptop and a Wi-Fi connection can blast his or her thoughts across the world, Roger Rosenblatt believes there are still titans of literature, and he’s invited them to Chautauqua Institution.

In the third installment of his lecture series on creative expression, Rosenblatt, the memoirist and longtime Time magazine essayist, will sit down with Lorin Stein, editor-in-chief of The Paris Review, Pamela Paul, editor of The New York Times Book Review and David Lynn, editor of The Kenyon Review, at 10:45 a.m. on June 28 in the Amphitheater to discuss their task as judge and jury of the nation’s best literature.

In an era of New Media,those publications and their editors are generals of the old guard. Established in Paris in 1953 (it has sincemoved to New York City),The Paris Review served as a platform for Ernest Hemingway, T.S. Eliot and Joan Didion and under Stein, a redesigned Review has won two national magazine awards. Eliot also appeared in The Kenyon Review, along with Maya Angelou, Joyce Carol Oates and E.L. Doctorow. The New York Times Book Review, now on its 120th year, receives between 750 and 1,000 books from publishers per month, of which it reviews 20 to 30.

Even though they sit at the helm of some of the world’s most respected publications, Lynn and Stein can’t quite agree with a job description that anoints them the gatekeepers of the literary world.

“I suppose indirectly I do [decide the best literature], but really it’s like playing any game on a high level: you have to be focused on the specific and the immediate,” Lynn said. “So I don’t think of a poem, story or essay as being as the best out there in the abstract. What I think is that it really grabs me by the throat. Does it move me, does it surprise me, does it impress me on its own merits?”

So what, in 2016, can grab the throat of the nation’s most influential editors? The answer has changed since Lynn took the reins of The Kenyon Review in 1994, as the internet revolutionized creative expression: who could do it, who could access it and what form would it take?

For Lynn, that meant an expanded readership and writership. Before they introduced online submissions, The Kenyon Review received between 2,000 and 3,000 entries per year, Lynn said. In the past four months, he said they’ve received 9,500 entries from across the globe, and with their website supplementing the traditional magazine— The Kenyon Review runs an entirely separate online operation — they have room to showcase writers from backgrounds that have traditionally been left out of literature, be it marginalized groups in the United States or foreign language writers from countries as far as Germany and Vietnam.

“I think we’re entering a golden age of literature in the U.S. and around the world,” Lynn said.

Quantity, though, is not always quality, Stein said. Since taking over The Paris Review in 2010, the longtime editor and critic has deplored the intrusion of “the sound of fingers on a keyboard,” as he wrote in January in The New York Times. In other words, Stein said, he fears that although the digital age has forced people to write more than ever before, it’s also pushed a particular type of writing, one that emphasizes self-promotion and instantaneous feedback at the expense of traditional, solitary writing. That style, Stein said, has leaked into the literary world.

“There’s a quiet and solitude that’s built in to the act of writing [as it] used to be that you don’t find if you’re writing on social media and hit send and expecting an instant set of likes and dislikes,” Stein said.

As editor of The Paris Review, Stein has embraced the short story. The form has declined in cultural significance since the days of John Cheever and John Updike, but Stein believes it to be the best arena for literary experimentation today. Stein said the best young short story writers achieve the top thing he looks for in a piece, what he calls the art of “self-disappearing.”

“I forget that the thing has an author,” Stein said. “I’m aware of the voice on the page, not of the person.”

Stein and Lynn in many ways agree. With the sheer glut of writing on Word-Press, Medium and elsewhere across the internet, they said people now need someone to sift through the flotsam and showcase the treasures.

“[The internet] ironically makes organizations like The Kenyon Review and The Paris Review all the more important,” Lynn said. “When you have infinite supply, you need someone to be a kind of arbiter of what is great work so readers don’t get overwhelmed by the vast flood.”