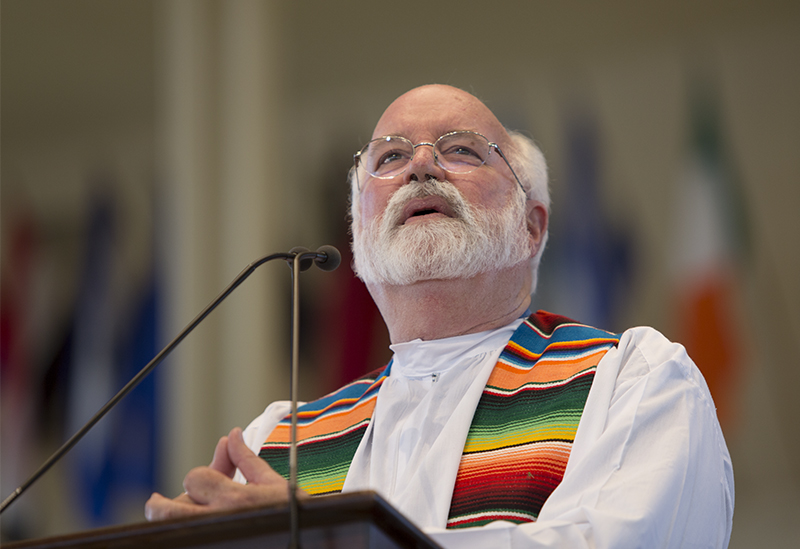 “We need a better God than the one we have. Our God atrophies and becomes puny and we are stuck in fifth grade asking God to let us pass a test even though we did not study. If we are not careful, we get stuck with a partial God. This truth should not frighten us,” said Fr. Greg Boyle, S.J. at the 9:15 a.m. Monday morning worship service in the Amphitheater.

“The Dude Shows Up” was the title of Boyle’s sermon. The Scripture was Mark 1:9-11. “We need an oceanic God who loves without measure, who says, ‘You are my beloved with whom I am wonderfully pleased,’” he said.

With a modicum of cooperation with God’s grace, he told the congregation: we can hear the four words of the Persian mystic and poet Hafiz, “come dance with me, come dance.” At Homeboy Industries, the homies tend to mangle the English language, he said.

“They out-Yogi Yogi Berra,” he said.

When a young woman wanted to introduce her man to Boyle, she described him as her “sufficient other.” A young man was frustrated with his lady because she was just be- ginning her “administration period.” Boyle, who had just relinquished day-to-day administration of Homeboy, told him, “I am just ending mine. I know what she’s going through.”

One day when he was saying mass at the San Fernando juvenile hall, a young man got up to read the Scripture and said, “The Lord is exhausted.”

“I sat up and looked at the paper on which the reading was printed. The word was ‘exalted,’ but this was way better,” Boyle said. “I need a better God than the one created in my image and likeness.”

We need the God who exhausts God’s self, who is too busy loving us because “God’s love for me is zero depend- ent on my love for God,” he said. That Scripture is one of four times that the voice of God is heard and each time God speaks a blessing.

God is like the father of a friend of Boyle’s, another Jesuit priest, who cared for his father as he was dying. Bill would care for his father during the day, and at night, he would put him to bed and then read to him as his father has read to Bill. He would read for a while, and then look at his father whose eyes were open and he was smiling at his son. Bill would tell him to go to sleep and continue reading and soon the eyes would be open again and the father would be smiling.

“We would think that at least one [of the times God speaks in the Gospels] would be from our politics: crooked, liar or low energy. But it is all blessing — you are my belov- ed with whom I am well pleased,” he said. “We need a bet- ter God than the one we had in fth grade, one who can’t take his eyes off his kid, who is smiling at him. We have to confront our hardwiring, and we are very hardwired.”

Boyle told a story about speaking to a group of parents and teachers at a “very chichi” school in Los Angeles. There was one young boy in the crowd, in the front row.

“Diego laughed at all the right places and puzzled over others,” he said. As Boyle wrapped up his speech with a story about a young boy beaten to death, Diego began to sob.

“He was grieving. His mother looked down at him, smiled and moved to put her arm around him. Diego turned to her and said, ‘What?’ Anyone who has raised a teenager knows what ‘What?’ means: what do you want from me, how embarrassing. That is hardwiring. But the mother’s communication was, ‘How lucky I am to have a son like you,’ and ‘What breaks your heart breaks mine, too,’” Boyle said.

“How much more so with God, who does not want anything from us, only for us: joy, peace, happiness and no one believes it. God only wants for me and can’t take his eyes off me, is smiling and is wonderfully pleased,” Boyle said.

He shared another story about Louie, who told Boyle that all he ever wanted to be was a big, bad gang member and he had spent his life disguised as that guy.

“When he came to Homeboy, he worked in the tattoo removal business. And if any of you are regretting your ‘Chautauqua’ tattoo, see me after the service,” he said.

Louie asked to speak to the trainees as he was finishing his training at Homeboy and told them, “All of you are diamonds covered in dust. You can wipe your dust off here.”

Louie called Boyle one night because his refrigerator broke. Boyle said, “I texted him ‘Sears, 4:30’ and he sent back ‘Beers, 4:30.’ As I was taking him home after buying a new fridge, he said, ‘I have to tell you something. I have been having some one-on-ones with God, and the dude shows up! Why would he do that after all the shit I have done? Why do that?’ ”

“The God who does that is a better God than the one we have because he is zero dependent on Louie’s love for him,” Boyle said. “Louie is God’s beloved with whom God is pleased. We need the God who says, ‘come dance with me, come dance.’ ”

The Rev. Robert M. Franklin presided. The Rev. James Hubbard, rector of St. Mark’s Episcopal Church in Clifford, Virginia, and a member of the Motet Choir, read the Scrip- ture. Jared Jacobsen, organist and coordinator of worship and sacred music, directed the Motet Choir in “With a Voice of Singing” by Martin Shaw. The Allison and Craig Marthin- sen Endowment for the Department of Religion supports this week’s services.