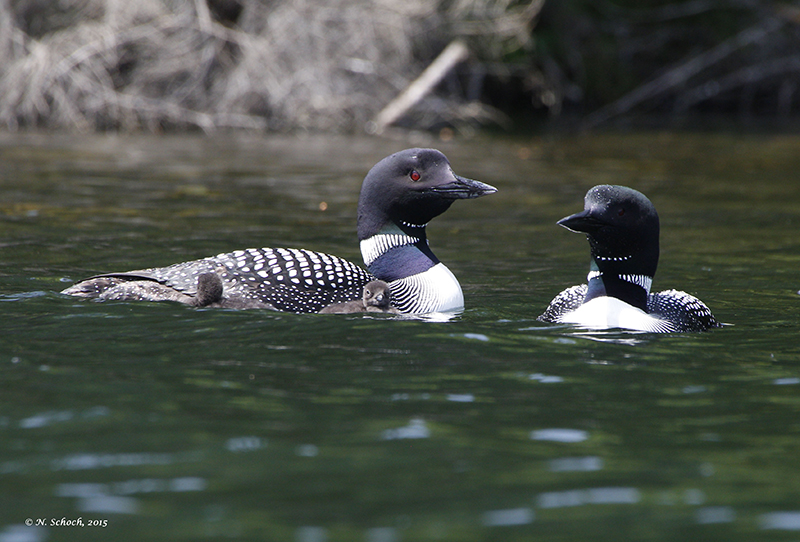 Although she’s a veterinarian by training, Nina Schoch doesn’t work in an office, and she doesn’t see patients. Much of her time is spent outdoors, on a boat, capturing loons to gather blood samples.

“It’s an amazing experience to be out all night looking for these birds,” she said.

Schoch, the coordinator of the Adirondack Center for Loon Conservancy at Biodiversity Research Institute at Portland, will deliver the first Bird, Tree & Garden Club Brown Bag lecture of the season on loon conservation and research at 12:15 p.m. Tuesday at Smith Wilkes Hall.

Conservationists refer to the bird as a biosentinel, which, in short, means loons provide a barometer for the health of an entire ecosystem.

“They’ll eat anything from insects all the way down to fish, and toxins that accu- mulate in the aquatic food web are going to accumulate in high levels in loons,” Schoch said.

If there’s something off-kilter with essentially any creature in a lake, signs of that will show up eventually in the samples Schoch and her colleagues draw from loons, which serve as shorthand for the status of the lake as a whole.

Loons can be identified by their bright red eyes and vibrant plumage during the summer months, as well as their plaintive nocturnal calls. Those calls, which span a range of tones and lengths, prove useful for communi- cation and mating. Schoch said she routinely imitates a loon’s call to its chicks in order to attract parent loons to her boat for sampling.

According to Schoch, the loon faces very few natural threats — pretty much the only thing that eats a loon is an eagle. The real threat to loons is people, she said.

Mercury poisoning, a by-product of coal-fired power plants, is one threat to loons and the aquatic ecosystem, although Schoch said recent regulations have reduced the problem. Boating and fishing also pose an everyday threat to the birds, as they disturb habitats and may lead to loons ingesting lead-based fishing tackle.

Schoch also attributed longterm fluctuations in the loon population to DDT, the notorious insecticide at the center of writer Rachel Carson’s Silent Spring that many pinpoint as the book that sparked the global environ- mental movement. As Carson noted, DDT killed insects, but it also poisoned many birds and harmed humans in the form of cancer and infertility. Decades after the Environmental Protection Agency banned DDT in 1972,

Schoch said the loon population across her region of study is “slowly increasing.”

In certain areas, Schoch said the loon population may even be approaching carrying capacity, or the amount of loons an area can feasibly support. She estimates the current loon population in New York state to be about 2,000 birds.

After July 16, a more precise number will be available in the annual New York State Loon Census, something Schoch helped organize starting in 2001. Volunteers across the state will canvas bodies of water across the state from 8 to 9 a.m. to gather an accurate count of the state’s loon population.

Schoch said she wasn’t familiar with Chautauqua’s loon population, if there is one, but recommended people maintain natural vegetation along the shoreline to preserve nesting sites for loons, and, if there is a loon spotting on the lake, to leave the territorial birds well enough alone.

“If the birds approach you, that’s fine, but give them their distance,” she said.