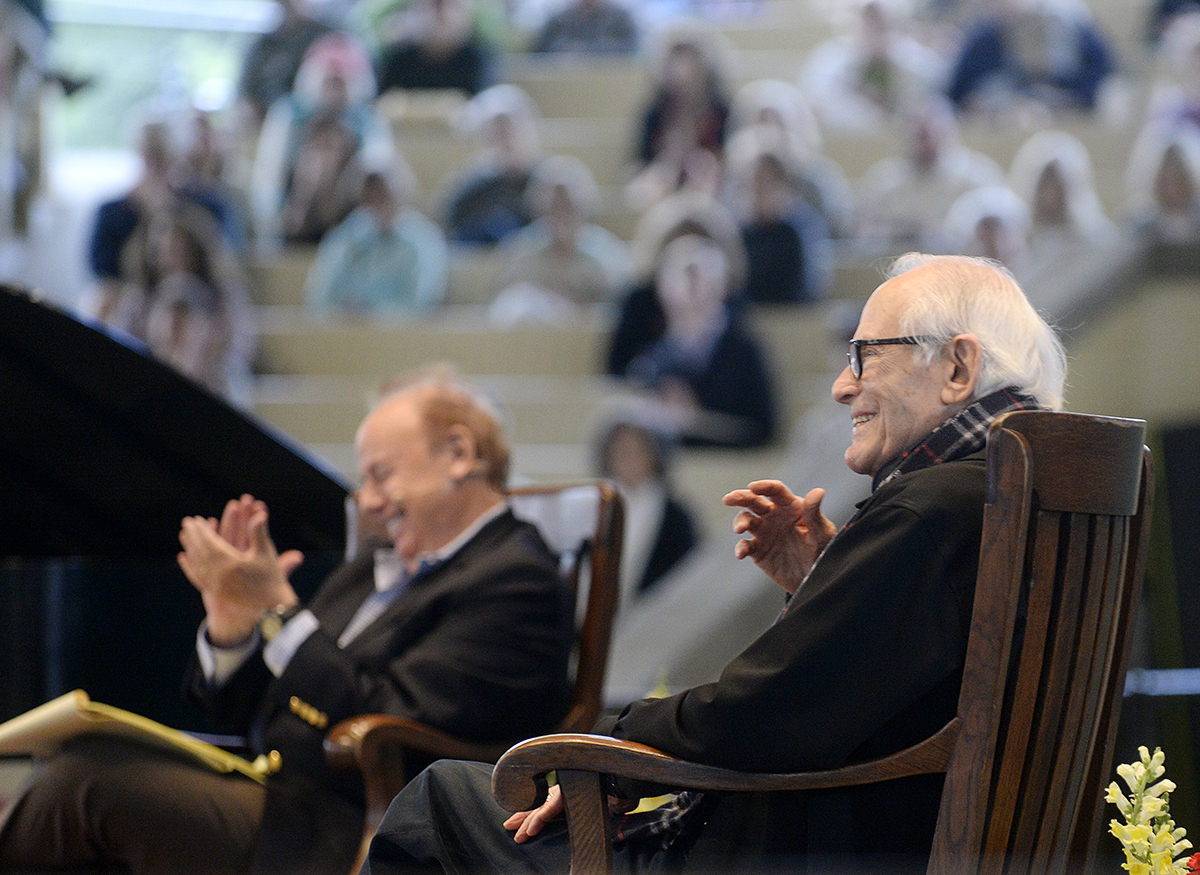 Award-winning songwriter Alan Bergman joined Roger Rosenblatt to continue the weeklong conversation about creative expression during the Wednesday morning lecture in the Amphitheater.

His wife and songwriting partner Marilyn Bergman was unable to attend the lecture because of an illness.

Bergman and Rosenblatt discussed the process of songwriting, and Bergman shared stories behind the creation of his songs.

Author and journalist Jane Pauley, who spoke during the Monday morning lecture, opened the discussion by singing “The Way We Were” accompanied by pianist Martin Dubé.

Released in 1973, the Bergmans wrote the song to go with the movie by the same title starring Barbra Streisand. The song was named after the title of the movie and the book, written by Arthur Laurents. It was designed to evoke emotion in the audience.

“If the audience is not crying by the end, we haven’t done our job,” Bergman said.

Bergman continued to say many of the songs, approximately 90 percent, are to a melody already written by a composer. The Bergmans discuss what the song is going to be about before starting the writing — though sometimes the melody will take them in a different direction.

“In the writing, we never know where we’re going in comparison to great writers like Irving Berlin, who always knew where he was going,” Bergman said. “He knew the beginning and the end. We don’t do that. We just go and see what happens.”

Bergman said, typically, the melody will reveal the words to the song as they listen to it over again until inspiration hits.

“I can’t tell you enough about the melody,” he said. “Melodies have words in them. Melodies have the rhymes in them, and we have to find them.”

Other times, Bergman said songs are written with a specific singer in mind. He recalled the song “Nice ‘n’ Easy.” The phrase “hey, baby” would never have been in the song if it wasn’t written specifically for Frank Sinatra to sing it. Bergman said the song was a “custom-made suit” for the singer.

The piece was a submission to Sinatra’s manager after he asked songwriters across the country for a song that would also serve as the title of an album of “lightly swinging love songs.” Sinatra chose “Nice ‘n’ Easy” for his album, which was released in 1960.

Before Berlin and Kern, many songs derived were from European styles such as the operetta. The two singers pioneered the music industry with their danceable love songs.

Bergman was also influenced by one of his mentors, Johnny Mercer, who worked with him for three years. Stephen Sondheim also made an impact on Bergman; he called Sondheim “the best there is.”

Bergman credited his natural ability to write and rhyme in his songs to his father, with whom he often played anagrams. That fostered his love for words and writing.

In 1957, Bergman wanted to ask Marilyn Bergman to marry him. Her favorite singer at the time was Fred Astaire, so Bergman and the composer went to visit Astaire to ask him to record the song “That Face.”

“He said, ‘I don’t record anything that’s not in a movie, but I love songs, and I love songwriters. I’ll hear it,’ and I sang it to him, and he said, ‘I’m going to record that next week.’ We were stunned,” Bergman said.

Bergman played the song for Marilyn Bergman and asked her to marry him. Today, the couple have been married for nearly 60 years and have continued to make music together. The Bergmans have won three Academy Awards, two Grammys and four Emmy Awards.

The Bergmans’ house, for many years, is often visited by composers who ask the duo to write lyrics to accompany the melody. Bergman said they listen to the song, and if they want to write lyrics they say, “We like that a lot. Leave it here.”

From there, the pair listen to the melody repeatedly and begin crafting the words of the song.

“The process, the best way I can describe it, is pitching and catching,” Bergman said. “One [of us] is the creator and one is the editor, and those roles change within seconds. It’s very vocal.”

Bergman said they write four to eight bars at once before singing the words out loud. Sometimes certain words or phrases won’t mix well with the music or sound right on specific notes. He used the example of using a harsh vowel, such as a long E, on a high note.

“The English language is a tough language to write songs in,” Bergman said. “French is very easy, because they have feminine endings. You have to be careful.”

One challenge the Bergmans faced came when a director asked them to write a song that would appear twice in the movie “A Happy Ending.” The first would be during a romantic scene; the second would be in a bar when the woman decides to leave the marriage.

With the two very different contexts, the Bergmans had to write a song that would fit both scenarios without making any changes.

“The director said, ‘You cannot change a word or a note, and the song has to be ironic. It means something entirely different.’ It was a great challenge,” Bergman said.

The Bergmans knew they were successful, however, when they played “What Are You Doing For the Rest of Your Life” for Jean Simmons, the lead actress of the movie, and she was brought to tears.

Bergman ended the discussion by singing “Love Like Ours,” which he and Marilyn wrote about the love they share.

“When love like ours arrives, we guard it with our lives,” Bergman sang. “Whatever goes astray, when a rainy day comes around, a love like ours will keep us safe and sound.”