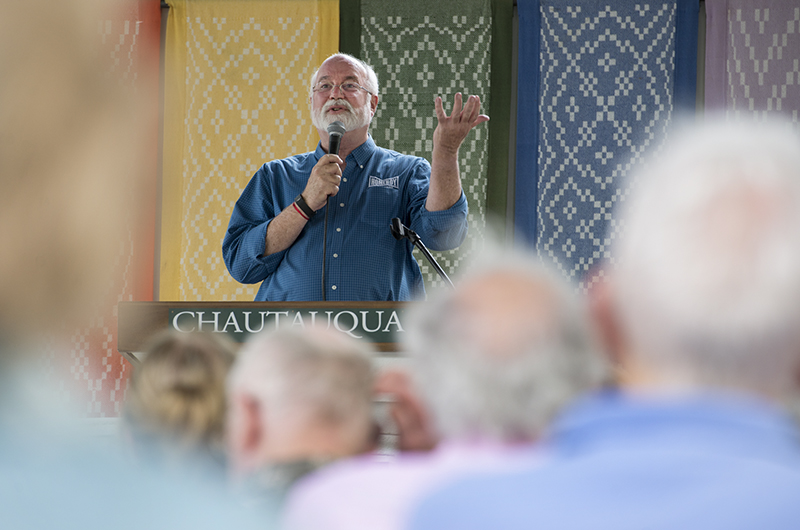 “When the desert fathers were feeling panicky or disconsolate they would say one word. It was not God or Jesus or love but ‘today.’ It anchored them and it is where we ought to stay,” said Fr. Greg Boyle, S.J., at the 9:15 a.m. Wednesday morning worship service. His sermon title was “Now. Here. This.” The Scripture was Luke 4:16-21.

“There are great things in this Gospel: good news to the poor, release of captives, letting the oppressed go free. But the most liberating word is ‘today.’ Jesus insists we are saved in the present, we are meant to dwell in the sacrament of the present moment,” Boyle said.

As in previous sermons, he illustrated his point with stories about the homeboys with whom he has worked with over the past 30 years. Paradise was contained in a booth at IHOP one night where Boyle took Chino and Louie for dinner after a speaking engagement. They both ordered steak because it was dinner time, Boyle said. The waiter asked Chino how he wanted his steak prepared and he answered “overwhelmed.” Boyle suggested medium rare. The waiter asked Chino if he wanted soup or salad and he said, “Yes.” “Fool, you have to choose,” Louie said. Chino chose salad and the waiter asked what kind of dressing he would like. Chino said, “What is that one called?” and imitated a hula dance with his arms.

“After I enjoyed the moment, I said ‘Thousand Island,’ ” Boyle said. Chino said, “Yes.” “Paradise was contained in that present moment in a booth at IHOP. Delighting in the now helps us enjoy what God loves,” Boyle said.

Another time he was flying to Washington, D.C., with two homeboys and one asked if they were flying Virgin [Airlines] because it was their first time flying. “He had what the Buddhists would call ‘a beginner’s mind,’ ” Boyle said. “But if we dwell in the past we are depressed, and if we dwell in the future we are anxious, but the now is always vast and new. The apostle Paul said now is the acceptable time, today is the day of salvation.”

When Homeboy Industries was getting started, Boyle would often take homeboys just released from detention to shop for new clothes as a ritual of new beginnings. He took cousins Lefty and Mikey to JC Penney’s one time and told them they each had $200 to spend and to use it wisely, not spend it all on a $150 pair of shoes. “I told them to walk and shop. They did not move and I asked them why. They said they were used to being supervised and wanted me to walk and shop with them,” Boyle said.

They got done and were in line at the checkout when Mikey remembered he needed a belt. He went over and started looking at them and could not decide which one to buy. He finally held up one and said to Lefty and Boyle, “I don’t know, what do you think?” Lefty answered, “You look splendid.” “Splendid?” Mikey said. “I heard it on TV once,” Lefty replied.

“And here is the truth. The risen life is hidden in this one, in trying on belts, taking your first flight or ordering steaks,” Boyle said. “There is another world but it is [found] in this one. We hold out for happiness, health and transformation just around the corner, but the corner is right here.”

Boyle said it is an occupational hazard to hire one homeboy, because he would immediately get seven calls from others in the same gang looking for a job. “They want a reason to get up in the morning, to not hang out all night,” he said. After he hired a homeboy from the White Fence gang, he got a call from Chico, a 17-year-old who wanted to learn about computers.

Finding “felon-friendly” jobs was hard and Boyle finally made an arrangement with a center that had a new bank of computers. Chico would go to school in the morning and then “work” at the center in the afternoon learning about computers. He would be paid by Homeboy Industries. Boyle waited all week to hear from Chico about how the job was going. It was Friday and he still had not heard and started to think the worst.

But that afternoon a fax came into his office from the center with a note from Chico. “Dear G, I am learning how to use a fax machine. I am learning a gang of shit here. Love, Chico. P.S. I really love the job. Thanks for getting it for me.” Chico always waited on his porch for Boyle on Fridays to get his paycheck and to talk with Boyle. “He asked about God, like I would know. Does God listen to us? Is God mad at us? This time was more valuable [than the job] — to ponder what was on God’s mind,” Boyle said.

Three months later, Chico was outside his house one night when a car drove slowly down the street and stopped. Words were exchanged and he was shot in the neck and paralyzed with possible brain damage. His mother, Rosa, called Boyle, who went to the hospital. At first, Boyle thought Chico did not know what was going on with his body but when he saw him the second day, Chico’s eyes moved when Boyle told him how much everyone loved him.

“His face said, ‘Please get me out of this body.’ The good news was he was alive. The bad news was that he wished he wasn’t,” Boyle said. “He died a week later when his heart stopped. I buried him and on July 5, I will bury my 208th young person who had died from senseless violence. His name was Calvin.”

“Grieving is inevitable, but lament cannot get a foothold if gratitude gets there first. No one lives forever, but we can all choose to live in the forever,” Boyle said. “Today, this Scripture is fulfilled in your hearing. Now is the day of salvation. Just. Right. Here.”