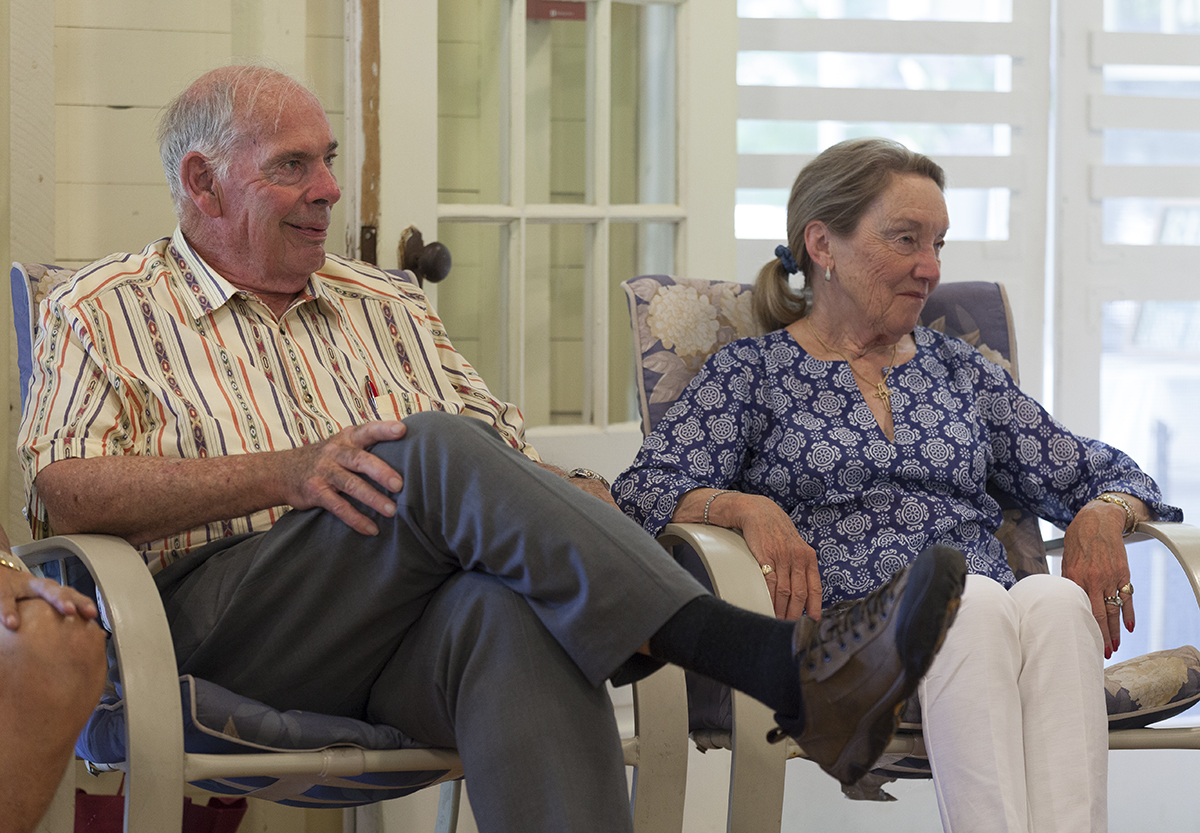 It sits and waits patiently in the shade on the south end of the grounds, propped just beyond the campus of Boys’ and Girls’ Club, above sunbaked tennis courts, expanding to a full view of Chautauqua Lake. Lying in wait, life jackets, bicycle helmets and kayak paddles are ready to express their full potential.

Sitting in their patio furniture are Jack and Yvonne McCredie, their eyes electric with a child’s curiosity. They’re ready to pounce.

It should come as no surprise that the McCredies, married for 53 years, have already pounced. This year, they have established the McCredie Family Director of Boys’ and Girls’ Club, an endowment fund to support the directorship currently held by Greg Prechtl and a significant contribution to the Promise Campaign.

“It really jumped out as the thing that meant the most to us,” Jack McCredie said. “It’s really looking to the future. It’s a good program. Endowing leadership positions ensures the ability of Chautauqua to keep that kind of forward thinking directorship and hire really good folks.”

Now retired, Jack acted as the chief technology officer at University of California, Berkeley; his time is now dedicated to volunteering at the Red Cross. Yvonne, also retired, spends her time fundraising for the Oakland Museum of California. Jack recently served on the Institution’s board of trustees, and he and Yvonne co-chaired the Chautauqua Fund from 2012 to 2014.

“Coach” Greg Prechtl, director of Boys’ and Girls’ Club and director of athletics at SUNY Fredonia, is celebrating his 30th summer working at Chautauqua.

“Jack understands what happens at Boys’ and Girls’ Club as well as anybody at Chautauqua,” Prechtl said. “He appreciates the experience. He wants to help in any way he can to ensure that future generations have similar positive experiences. I was just in the right place when these people decided to do something wonderful.”

Jack McCredie is no stranger to the Club experience, having attended Boys’ Club as both a grouper and a counselor. Yvonne, however, discovered Chautauqua Institution and Club through her husband.

“My experience, being that I didn’t get to know Chautauqua until we were married, is purely different because it is absolutely fantastic for mothers of young children to know that they’re going to a safe place and to have fun with teenage counselors, and therefore allowed me to go to classes and lectures,” Yvonne said.

But the McCredies strongly advise against labeling Boys’ and Girls’ Club as a babysitting service.

“That’s never what I thought it was or could be,” Jack said. “It is much more than that. It’s a part of the education program. Teaching people to swim and to sail. To be responsible for others. To learn arts and crafts. To me it was always an education program.”

Yvonne, cognizant of having a space for kids to make their noise and not disrupt others, highlighted Club’s ability to also instill independence and self-reliance among the younger members, in particular, her grandchildren.

“I can pack a towel and a bathing suit in a knapsack, and at 10 minutes to 9 a.m., ship them down the hill here, and they can go by themselves at 6 years old,” she said. “They’re sort of embarrassed if anyone says, ‘Well, I’ll walk you down.’ ‘No you won’t.’ They’re completely independent. Where else do kids get that type of independence? They wander home for lunch, they wander back in the afternoon. It’s beautiful.”

From the beginning, Jack said, it’s always seemed to him that Boys’ and Girls’ Club and Children’s School have the same philosophy.

“They’re more than fun,” he said. “They’re education at a young age, and trying to teach important skills and lessons, and responsibility. The variedness of it: it’s not a soccer camp, it’s not a computer camp, it’s not a music camp. It teaches breadth of all different kinds of things at a great age when kids are supposed to be exploring. But also, you know, always having fun doing it.”

This is not the first time the McCredies extended their generosity to the Institution.

“The McCredies have been very careful with investments in Chautauqua,” said President Tom Becker, at a celebration of the new endowment and Prechtl’s 30th anniversary at Club. “Theirs is a thoughtful philanthropy.”

Over the past couple decades, Jack and Yvonne have provided major endowments toward the renovation of the Amphitheater bleachers and to the playground next to the Coyle Tennis Courts. Their directorship endowment is their first not involving significant physical construction or modification, instead concentrating its efforts to preserve and sustain an existing program.

Since 1893, the Club has entertained and instructed children of the Institution. Jack and Yvonne note the program’s long existence and impressive stability, but also see the problematic element that with stability can come little change. However, they see this specific situation as a benefit.

“Hopefully with this endowment, it gives a permanent base,” Jack said. “One that we know is solid.”

One of the invaluable layers that nourishes that base is the professional staff.

Prechtl conveyed the remarkable feat of his adult staff, calculating their cumulative years of service to Boys’ and Girls’ Club at more than 180 years.

“Greg’s philosophy has infected all of us senior staff because we all believe in it,” said John Chubb, assistant director of Boys’ and Girls’ Club.

Matt Ewalt, associate director of education and youth services, read a statement from Chubb at the celebration.

“Greg doesn’t want the headlines,” Chubb said. “He just wants to do this job as well as it can be done.”

From top to bottom, Prechtl said, he and his staff “make sure to do our best,” ensuring that parents and kids alike are well served at Club.

“The McCredies are pretty special to do this,” Prechtl said. “There are a lot of places people can choose to make their gift. The fact that they have made three gifts to youth programming at Chautauqua shows their commitment to the future of Chautauqua.”

Club, Chubb said, is a place of many experiences.