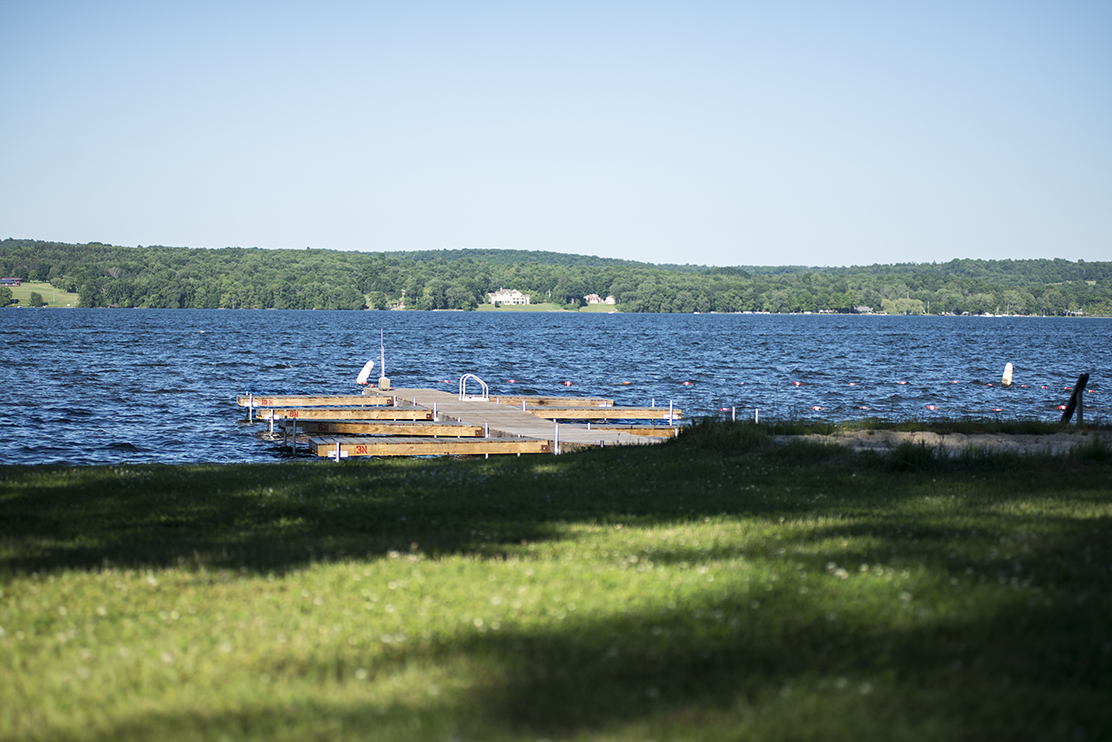 Chautauqua County is administered following the federal template, with a county chief executive elected every four years and a county legislature whose members represent each of the 19 electoral districts in the county. Since 2014, the county executive has been Vince Horrigan, a popular self-described Republican pragmatist who lives in Bemus Point.

Horrigan, a retired U.S. Air Force officer and regional Red Cross director, was elected with 56 percent of the vote in November 2013 after entering politics via service on the Bemus Point Town Council and the Chautauqua County Legislature. The county executive has strong views on the health of Chautauqua Lake, town-gown relations with Chautauqua Institution and prospects for economic development in one of New York state’s 10 poorest counties.

We spoke in his third-floor office in the county administrative headquarters building on the hilltop in Mayville.

Most Chautauquans are not your constituents. Could you tell them about yourself?

I was born in Cleveland, where my father ran a corporate division. My family had come to Chautauqua Lake for vacations since I was 5 years old. We stayed at the old Lune Lodge at Point Chautauqua. We had a ball on those vacations: fishing, boating, swimming. One day we were driving along in our 1955 Ford station wagon — a woody. My father spotted a small cottage near Bemus Point, and we bought it for $10,000 from the owner of a meat market in Jamestown. My mother, sisters and I settled into a pattern of spending summers on Chautauqua Lake, and my father would take the train up from Cleveland to Westfield for the weekends.

I well remember spending time at Chautauqua Institution, enjoying the musical entertainment and just walking around the place. I went to Kent State University, and my fraternity would sometimes have fraternity parties up here on the lake. I graduated in 1971, and went on to a 28-year career in the Air Force that took us all around the world. After I retired, my wife and I wanted to come back to this region. We moved here in 1998. I got involved in the Red Cross and, eventually, politics.

A couple of years ago I organized a fraternity reunion in Bemus Point. These were all guys in their 60s. I put up signs around Hotel Lenhart in Bemus where many of them stayed. The signs said “Sig Ep reunion.” Not long after I put the signs up, a couple of college girls approached us on the porch. “Where’s the reunion?” they asked. “We’re it,” we replied. “What class are you?” We said we were the class of 1971. “OK, see you later,” they said. They couldn’t get out of there fast enough!

We’re lucky that our kids still come back for family reunions in the summer. They live in Florida and we live here. It’s the one steady in our life, with all the travel we have done over the years. We have the kids’ handprints in the breakwall down by the water.

Tell me about the Chautauqua County government.

We have a $256 million county budget. We submit it to the county legislature, they tinker with it, and I can sign or veto what they pass. My belief is that you get things done in our American democracy by working together — not what is happening in Washington, D.C., now. I’m proud of the relationship I maintain with our county legislators. We do get things done. We have 15 Republicans and four Democrats in the legislature, but we try to focus on issues and money.

What is needed to invigorate this county’s economy?

Our No. 1 focus is retaining existing businesses. No. 2 is focusing on the entire county when we try to attract new business. The biggest catch right now is the Athenex pharmaceutical plant in Dunkirk. [The 300,000-square-foot pharmaceutical manufacturing plant is expected to employ 900 people when complete.] Manufacturing has been historically important in this county, and it still is. Health care, food processing, hospitality and tourism are all key elements in our economic sustainability.

The area inside routes 394 and 430 around Chautauqua Lake accounts for 26 percent of the county’s real estate tax base on less than 1 percent of its land mass. I see more growth potential in the north end of the county, along Lake Erie. But there is plenty of movement and progress around Chautauqua Lake. I would mention the National Comedy Center in Jamestown, the PGA tournament next week at Peek n’ Peak, hotel investments in Jamestown, Celeron and the Webb’s project in Mayville. There are other hotels coming in Westfield, Dunkirk-Fredonia and Silver Creek in the north.

Where does Chautauqua Institution fit into the broader picture?

The Institution remains a major draw for the county. It brings in tourists from the outside. But also, those invested in Chautauqua, owning property, paying significant taxes, gives us a tremendous asset. People of wide renown are there. In my time, I’d have to say the Institution is the county’s biggest asset. Down the road, I hope it is joined by tourism and business draws like the Comedy Center and the pharmaceutical industry.

On that latter point, we have talked previously about town-gown relations between the Chautauqua Institution and the surrounding area. There is a difference between life inside the Institution and outside. The Institution has been reaching out to schoolchildren in the county, bringing them in for programs. What’s your view?

I see a couple of things. We’re looking at a challenge. The Institution may have an older demographic. But older folks are much more active now. They want recreational options. We’re trying to offer more in the county. We’re moving ahead toward completing a bike trail from Westfield, through the Institution, on down to Celeron. We are hoping the LECOM pro golf tournament at Peek n’ Peak will appeal to Chautauquans. When the National Comedy Center becomes the Cooperstown of comedy next year, we want crossover interest between that and the Institution.

I see the Institution as a resource we can continue to work with in schools, health, industry, tourism. We have talked about holding some kind of industrial development fair on the grounds; we have had positive feedback from the Institution on that. We — the county, different agencies — need to come in and show what we can offer. The onus is on the county to work to develop these mutual interests, not just wonder why Chautauquans don’t get outside the gate. We will be focusing on that. I’d love to tap into the wealth of executive experience among Chautauquans.

Let’s talk about Chautauqua Lake. You’re engaged in its health. Where are we, and what lies ahead?

The lake is impaired. A top county priority is the health of the lake. We have done some things and we need to do more.

First, I feel we now have a very effective watershed management plan. We have created the Chautauqua Lake [and Watershed Management] Alliance. Their job is to help us get our hands on more money. We need all the money we can get for various critical initiatives. Different initiatives often mean different funding sources.

On Chautauqua Lake, I see the key priorities as getting rid of the septic systems, going hard after federal and state matching funding, and maintaining steady county and foundation funding for basic services such as weed harvesting.

The first priority is sewers. When I came into office, I moved away from my predecessor’s focus on centralizing sewer systems around the lake. I sat with the Chautauqua [Institution Board of] Trustees and [Chautauqua Utility District supervisor] Tom Cherry and listened, and it was clear that Chautauqua was going to upgrade its sewer plant. [The new plant will come on line in 2017.] The community is behind it, so I saw no reason to try to interfere with that.

I talked to the people at the north [Mayville] and south [Celeron] sewer plants and they opposed a merger. So I came away with the objective of getting rid of all the various pockets of septic systems around parts of the lake so all the lake basin is on sewer systems. I feel we are making progress, but there is work to do.

The Chautauqua Heights and Point Chautauqua areas are on track to be connected to the Mayville plant. We need to finish down to Midway Park on the east side of the lake. On this [west] side, there’s sewer linkage work to be done from Goose Creek to Stow, and eventually up to Prendergast Creek. That will complete the loops. The price tag for this work is about $70 million, of which we have $10 million covered. Homeowners cannot afford to pay that much, so we are pursuing grant funding to supplement tax income in raising the $60 million.

Through the new alliance, we are leveraging federal and state money to mitigate the effects of agricultural runoff in the lake’s tributary streambeds. Through the county and local foundations, we have $300,000 as matches for grant money. It would be nice to have more retention ponds like we have at the Wegmans parking lot in Lakewood but they are very expensive.

We want the Chautauqua Lake Association [CLA] to have a stable source of funding year to year because their lake mowing and maintenance is something that recurs every year.

You know that the CLA has an annual lake weed removal and shoreline maintenance contract with the Institution.

Yes! This is a very good example for other entities to follow. I’d love to see other areas — the Bemus Creek area on the other side is a good case in point — follow Chautauqua’s lead on this.

Are you optimistic about the lake?

I am. You know I get around the county and around the lake, and I see properties with For Sale signs and then they come down, and we know these properties are selling. There is so much more attention paid to the lake now, so much more demand for a well-maintained lake. I won’t say a perfectly clean lake, because the fishermen have their interests, too.

On management, we formed a lake management commission, and they recommended formation of the alliance and we have made that happen. The alliance has now added a full-time grant writer and we got five new grants last year. We can’t just keep passing the hat.

We are facing a challenge here with the lake. But we’re making progress, and we’ll keep doing so.