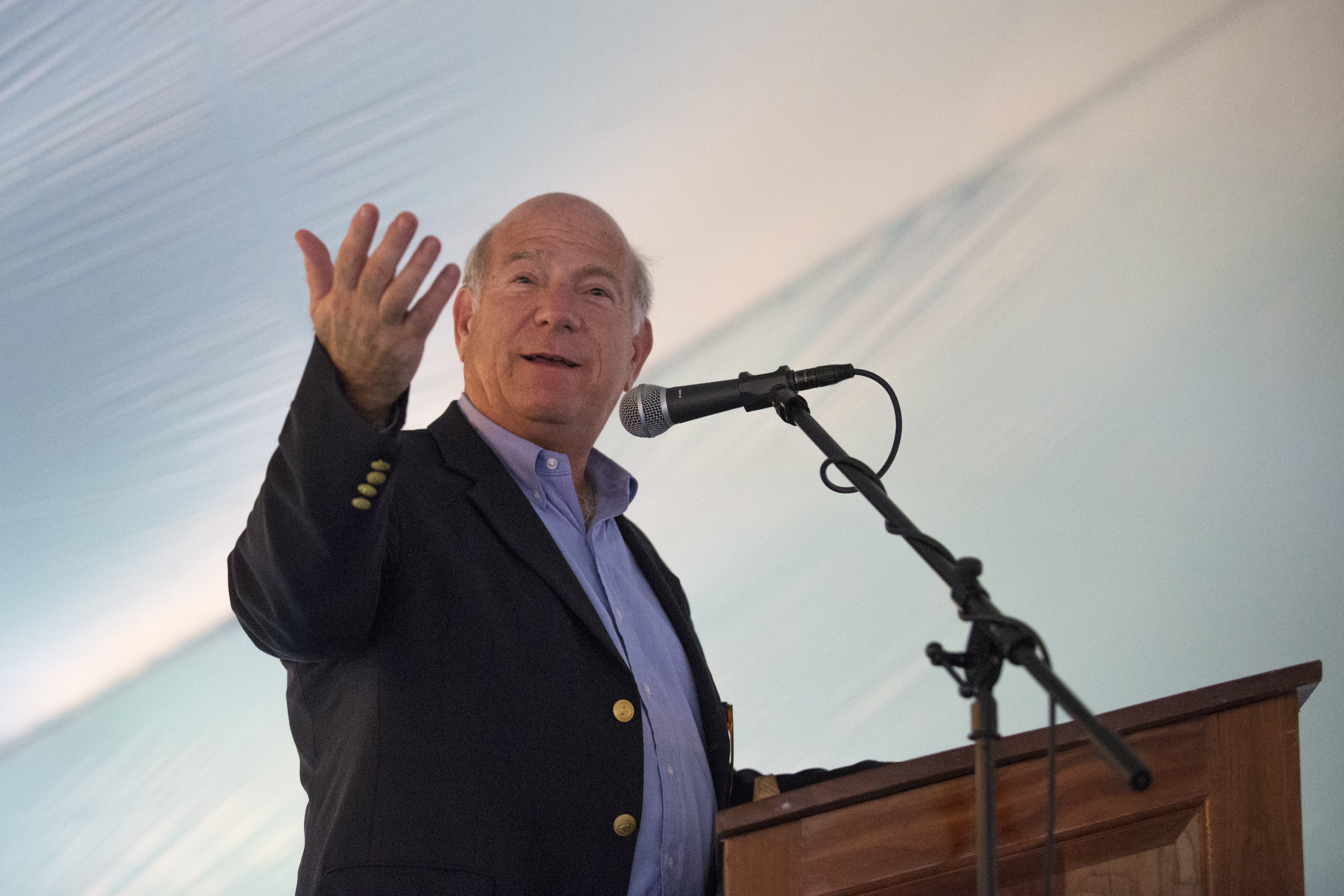 Traditionally held the Friday prior to the official start of the season, the night is an intimate gathering of pres- ent and former board members of the Foundation and Chautauqua Institution’s trustees, as well as 50 or so of the Promise Campaign’s volunteers and their spouses, thanking them for their years of support and dedi- cation.

“It’s true,” said Geof Follansbee, vice president and CEO of the Chautauqua Foundation. “Though it’s now become a cliché, but anything we accomplish is because we stand on their shoulders, because of what they’ve accomplished. It’s because of them that we’re able to do this.”

Cathy Bonner, chair of the Chautauqua Foundation Board of Directors, was first to speak and honor the Hagen family. In addition to donating funds for the purchase of the cottage, Hagen has also committed up to $150,000 to match — dollar for dollar — gifts made to its endowment.

“They represent the best of giving in Chautauqua,” Bonner said. “And with the help of the Bird, Tree & Garden Club, we hope we’ll be able to restore the garden of Mina Miller Edison to its full glory.”

When Hagen stepped forward to speak, his voice traveled through the crowd in lacquered zest.

“Our job as stewards is to help continue the preservation of places like this,” Hagen said. “And working on strategic plans for their potential uses to the Institution.”

A board member of the Chautauqua Foundation, Andrew Camden, was quick to underscore Hagen’s thoughts on the Institution’s ownership and further applications, such as exposing visitors to the early history of Chautauqua.

Members and volunteers of the Chautauqua Foundation dedicate their time diligently, carefully planning and calculating over a period of years. But they also have to be able to adapt. The Promise Campaign, which began in 2010, entered its public phase in fall 2013. But major projects such as the renovation of the Amphitheater, for example, had to take precedent over such projects as Bellinger Hall as time progressed.

“What you have to realize is the day after you adopt a plan, it’s somewhat out of date,” Follansbee said. “The facts change. Situations change. You need to be pre- pared to adapt to circumstances as they exist on the day you’re living.”

The Rev. Robert M. Franklin Jr., director of the De- partment of Religion, gave a blessing before the meal and spoke a few words from novelist Victor Hugo.

“‘Dream no small dreams for they have no power to stir the hearts of humanity.’ All Chautauquans are dreamers, but these campaign volunteers dream only grand and bold dreams,” he said.

Given that the Promise Campaign has achieved $96.1 million of its $98.2 million goal, it’s fair to say the Foundation realized its dream, answered the call and adjusted accordingly.

“It’s not about the figure, but the impact the dollars will have,” said Steve Percy, co-chair of the Promise Campaign.

“But if we don’t make it nine figures,” he joked, “I’d be embarrassed.”

The night also acted as kindling for what the summer season was soon to bear. Deborah Sunya Moore, vice president and director of programming, spoke of “the balance between tradition and innovation,” with emphasis on the newly appointed artistic and general and artistic director of the Chautauqua Opera Company, Steven Osgood. Osgood introduced members of the company, who then performed excerpts from their upcoming performances, such as La Traviata and The Mikado.

President Tom Becker walked to the podium to end the night. Invoking the leitmotif of the season, “What Does It Mean To Be Human?” Becker spoke with a lyrical cadence.

“One of the lessons that Chautauqua learned early, and has expressed in a devout sort of way ever since, is that great teaching lifts the human condition, because it devotes itself to good thinking, which then carries with it talent certainly, but a whole lot of discipline, rigor, and holding one another to a standard of life and expression,” Becker said. “We offer people the kind of consideration that takes you from the moment to the past, to ask you to think about things both artistically and ethically. And we bring both a consideration about moral precepts and ethical choic

es. There’s 65 days, and then you go back to communities, and hopefully make those communities better. There is nothing like this on the face of the earth.”