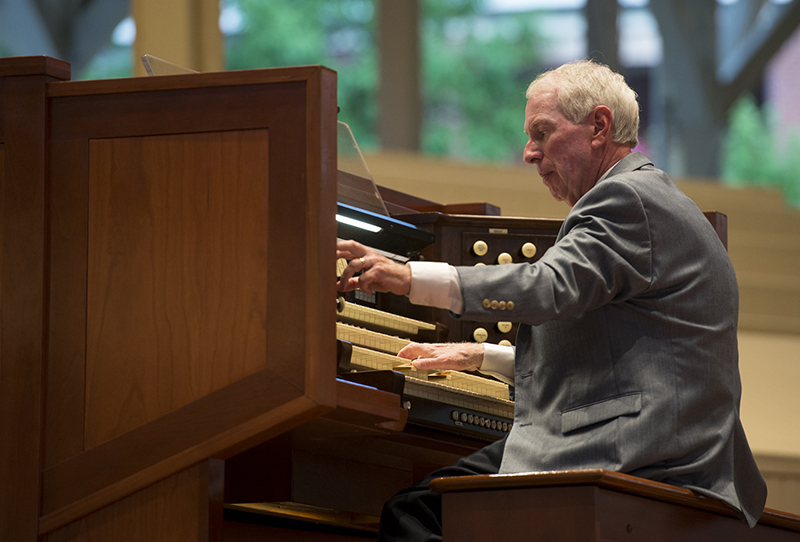 Organists across the world know of Chautauqua Institution’s Massey Memorial Organ, and in some, it evokes strong feelings. Organ players in San Diego always feud over whose is the largest outdoor organ in the world, theirs or the Massey. Although the Massey Organ is 20 percent larger, those in San Diego claim that the Amphitheater’s roof should classify it as an indoor rather than outdoor building.

Jared Jacobsen, organist and coordinator of worship and sacred music, is the only person in the world who plays on both of those instruments. Regardless of which is technically larger, he has a special connection with Chautauqua’s Massey Organ because he’s dreamed of playing it his whole life.

At 12:15 p.m., June 29, Jacobsen will give his first weekly Massey Organ recital of the summer in the Amphitheater. The theme for week one is “Happy Holidays,” and he will play a piece to commemorate each major holiday throughout the year.

Built in 1907, the Massey Organ has 5,640 pipes. Jacobsen said he developed a symbiotic relationship with this organ, where the music “goes into [his] eyeballs” and he plays without conscious thought.

Jacobsen’s “Happy Holidays” concert will include a variety of styles. It will feature a piece Bach wrote about new life and new beginnings to be played on New Year’s Day, a spooky sounding Halloween piece and many variations of “Happy Birthday.”

For the Fourth of July song, Jacobsen will play Charles Ives’ Variations on “America,” which he said Chautauquans appreciate more than any other audience because of their understanding of diverse musical styles.

“Chautauqua is a place that’s full of inside jokes. Everywhere else in the world that I play it, people usually don’t get the joke,” Jacobsen said. “At Chautauqua, they always get them, and so people are laughing and giggling as the piece goes by.”

Jacobsen is excited to be back playing organ in Chautauqua, doing the dream job that he’s now had for 20 years.