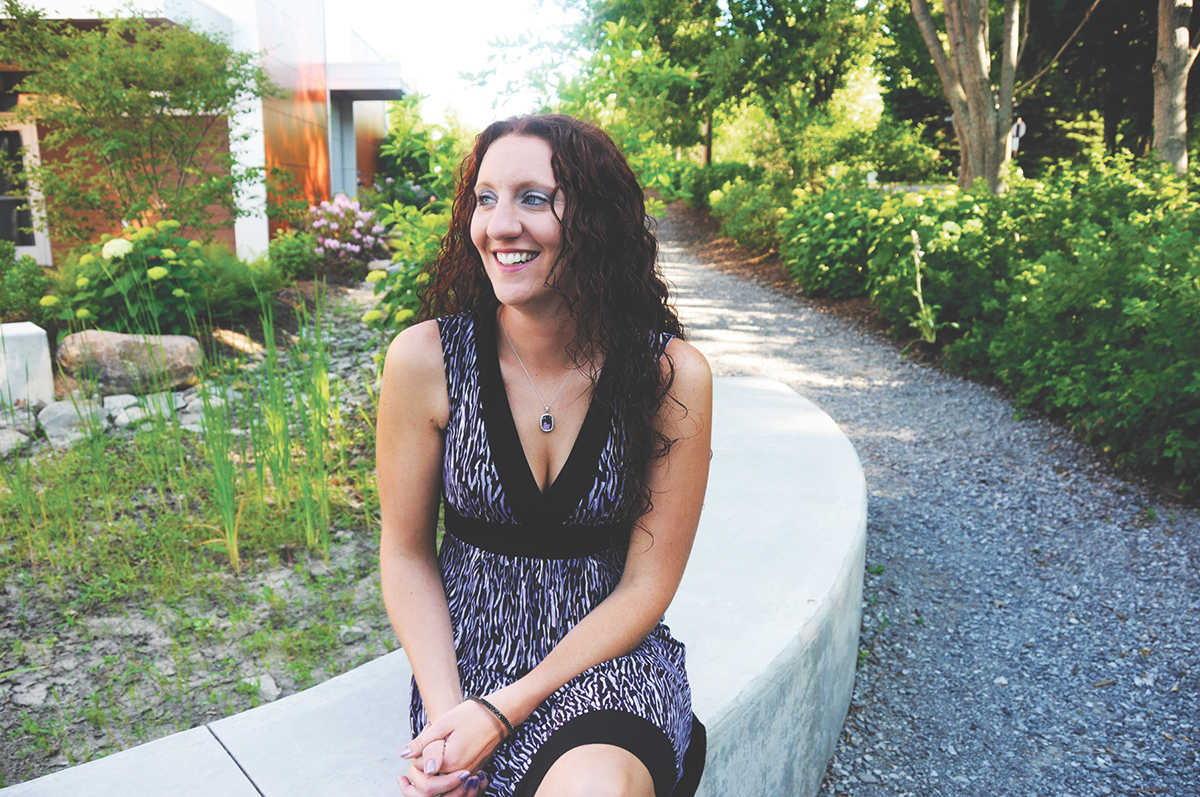 Ryan Kiblin was tall, with long, sometimes-blonde-sometimes-red hair often hidden beneath a visor. She came to Chautauqua as a seasonal employee in 2002; by 2014, she was grounds, gardens and landscapes manager for the Institution. The Miller Bell Tower was tattooed on her ankle.

Kiblin died suddenly in July 2014 at age 33. She was eight months pregnant and about to meet the baby girl she would name Emma Lee. But after Kiblin went into respiratory distress, and despite doctors’ efforts to save the baby, both she and her daughter passed away at Women & Children’s Hospital of Buffalo.

“She was too damn young for such a thing to happen,” said Geof Follansbee, CEO of the Chautauqua Foundation. “There was no sense that it was even possible.”

What’s now the Ryan Kiblin Memorial Stormwater Park is the last garden she worked on. Once, the site was a parking lot, but what once languished as rows of asphalt is now a lush landscape of tulip trees and chokeberry bushes and pink diamond hydrangeas. Water trickles down a small stream that filters harmful nutrients from the runoff as it passes through native vegetation. Bees buzz and birds chirp against the music drifting from the practice shacks in the distance.

Stormwater and rain gardens like this one, now sprinkled across the Institution, serve as an elegant defense for the Chautauqua Lake ecosystem and a living legacy. Kiblin planned, planted and evangelized the first examples of rain gardens on the grounds, using flowers and trees to replace less effective and frankly uglier drainage pipes.

“She did a great job getting the whole idea of sustainability moving here,” said Betsy Burgeson, Kiblin’s successor as supervisor of gardens and landscapes. “She was crucial with all of the stormwater management parks. That’s really what got it going.”

When she got the job, one of Burgeson’s first acts was installing the Miller Park rain gardens, and, earlier this week, she presented a BTG Lake Walk to showcase the rain gardens along the shore. But even as she enacts other, new initiatives, Burgeson’s office remains festooned with vines that wrap around the ceiling, planted by her predecessor.

“Her artistry is all around you on these grounds,” Chautauqua President Tom Becker wrote in a letter following Kiblin’s death.

What’s missing, though, is Kiblin herself, along with Emma Lee.

“I was really excited for our children to someday play together and for us to experience parenthood together with her,” said Ray Downey, the Institution’s multi-media manager and Kiblin’s friend. “It was terribly hard to see that not happen. It sucks.”

Instead, Downey found himself assembling a PowerPoint presentation for Kiblin’s memorial service, a procession of images from her work and her life.

“Looking back through all those pictures, you can see someone grow,” he said.

The memorial, held in the Hall of Philosophy, drew crowds equivalent to the afternoon Interfaith Lectures. People overflowed on the lawn and spilled into the streets, and Phish, Kiblin’s favorite band, pumped over the speakers. Person after person, including President Becker, shared the lectern to offer their tributes to Kiblin.

“It’s a good community activity to tell one another stories and to remember that we know each other in individual ways as well as collectively,” Becker said, reflecting on that day. “It’s those private exchanges that constitute our more profound memory.”

That sharing was powerful, said Dreux Dominick, an Institution tradesman, because to know Kiblin was to hear her stories. She told stories of people from all segments of her life as if they were interconnected, and some of those imaginary connections were eventually realized.

“After she passed, we met a lot of those people she would tell stories about, and now they’re our friends,” Dominick said.

Dominick rode to and from work with Kiblin; during those commutes, she talked about her cats, Puffer and Esther, and Dominick would update her on his children, to whom Kiblin was Aunt Ry Ry.

At work, Kiblin’s staff were her kids, no matter their age. Dominick said it wasn’t uncommon for Kiblin to field 3 a.m. calls from her young, seasonal staff — often living on their own in an unfamiliar place for the first time — and help them out of whatever bind they were in.

She was also about getting things done. Dominick recalled a moment when Kiblin rolled up to the park which now bears her name, then under construction, to find a crew of about 12 staff standing around. Kiblin hopped out of her golf cart, fully pregnant, and started digging the hole herself.

“If a pregnant woman can do this, you sure as hell can,” Kiblin said.

At home, Dominick said Kiblin’s house was akin to a greenhouse, covered with plants inside and out. Kiblin often took her job home, working until 11 p.m. only to be out of the house at 5 a.m. to start a new day. But Dominick said her home was also a place of refuge, where she and a friend would binge-watch the soap operas she taped over the summer. Her walls were plastered with photos of friends and family. If you made the wall, Dominick said, you knew you were special.

“She was my second best friend, next to my wife,” he said.

Other than nature and her friends, Kiblin loved music. She was a regular at the Great Blue Heron Music Festival, an annual blues and folk festival held in her native Sherman, New York, about 20 minutes west of Chautauqua. There she would volunteer and chop wood and plant flowers in advance of the festival, Dominick said. But mostly she’d dance.

Downey remembers Kiblin’s feistiness and quirks, like her fear of moths. But generosity, Downey said, was her friend’s defining characteristic, exemplified by the time Kiblin showed up at her house on a sleeting day in November — while sick — to help with some plants.

“She would give the shirt off her back for somebody, and she would be freezing, and she wouldn’t care,” Downey said. “That sort of sums her up.”

That spirit and dedication made Kiblin something of a celebrity across the grounds, where she gave lectures and talks to connect her work with Chautauqua, although she was never quite comfortable with the limelight. Dominick said Kiblin and a friend once disguised her in a big hat and sunglasses so she could enjoy the grounds free from recognition.

Considering that, her friends said she would probably be uncomfortable with the attention garnered by a park named after her. But that’s because Kiblin never did anything for herself, Dominick said, and her namesake garden isn’t for her, either.