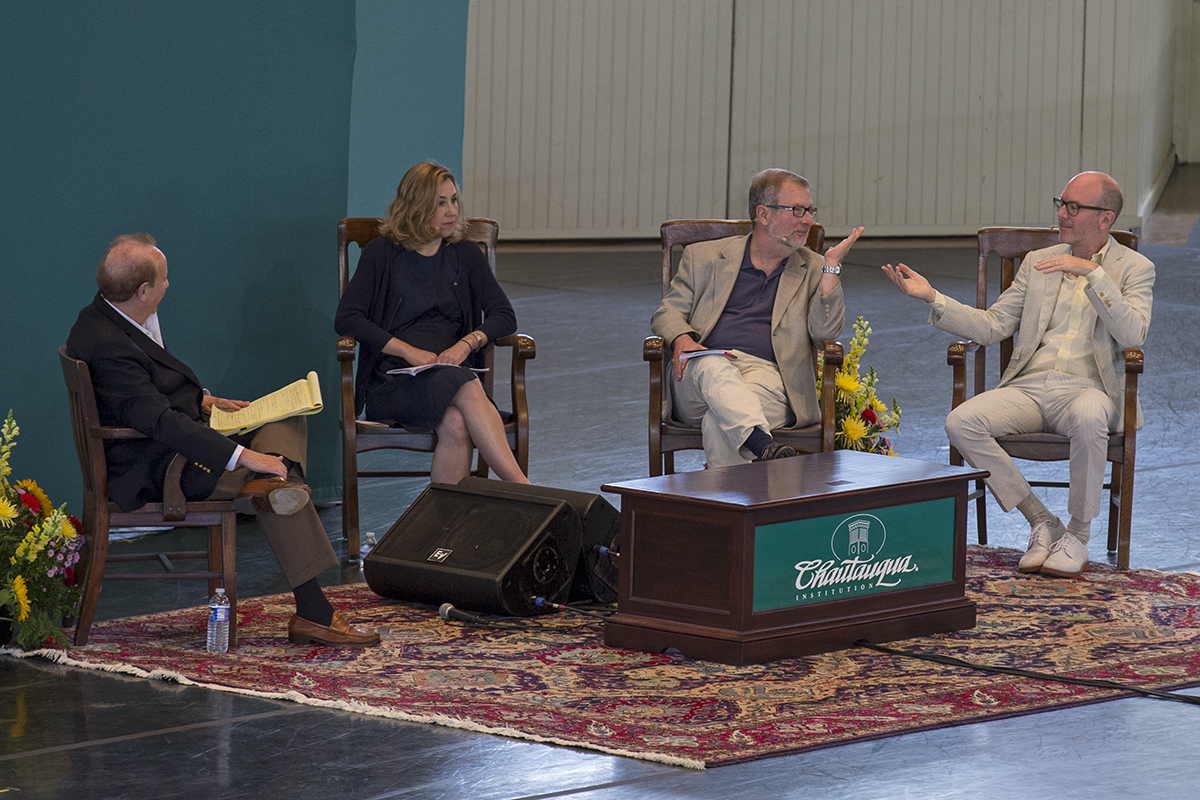 In a digital age where tablets and smartphones make hundreds of thousands of books and magazines available in an instant, author Roger Rosenblatt and friends believe literary works still hold their place in today’s society.

Rosenblatt led a conversation about literature and the community that literary works can create at the Tuesday morning lecture in the Amphitheater. Joining him were editor-in-chief of The Paris Review Lorin Stein, editor of The New York Times Book Review Pamela Paul and editor of The Kenyon Review David Lynn.

Throughout his time working as an editor, Lynn said he has seen the industry change and grow. Though there is a notion that print and a love of literature is dying, Lynn disagrees.

“The message I’d like to spread is that the literary life is very much alive and well,” Lynn said. “Today, writers and readers know each other, they’re in contact with each other. I think that’s a very vibrant movement, and I’m very glad to be apart of that.”

In the last decade, Stein said print circulation of The Paris Review has tripled from what it was during the ’50s, ’60s and ’70s. Additionally, there are 1 million readers viewing and interacting with The Paris Review’s website each month. Stein said that alone shows an interest and a hunger for literature.

Rosenblatt said the number of independent bookstores has declined in recent years, as have book sales both digitally and in print. Paul, however, disagreed and said she has high hopes for the future of books.

“I don’t know that [book sales] are necessarily declining,” Paul said. “The [statistics] I look at that make me feel very optimistic are recent book sale figures and bookstore figures that have been really strong, and the independent bookstores in this country have rebounded.”

Though the internet allows for readers to access quick, to-the-point news and blurbs, Paul believes books and bookstores have the power to create a community for readers.

“People are yearning — I think this Amphitheater demonstrates it — for community, and that bookstores have become a place for a gathering of people who are interested in literature and current events and have been reading them in longer spurts than 140 characters,” Paul said.

Rosenblatt said bookstores and literary magazines must play up their strengths in order to survive. He recalled when Life magazine went out of business.

“It’s a great value, first of all, knowing what your strength is, playing to it and knowing there’s a hunger for it in a great number of people,” he said. “There is such a large collection of people who read, who care about books, who think about books, who believe in the life of the mind.”

With the boom of the digital age, Rosenblatt said readers themselves are changing and evolving. He asked the editors if they have thought of the modern reader and what kinds of literature they’re looking for.

“It’s very easy to underestimate the possible market for any great book,” Stein said. “People will always say Americans don’t read x or y. They don’t read books in translation. They don’t read long books. The truth is when the right book comes along, Americans will read it.”

Books allow readers to immerse themselves into the story and unplug from the digital-oriented world, which Paul believes is an aspect digital collections can’t compete with. They allow for an escape from reality, which will be a lasting benefit of print books. Despite the shorter articles and stories found on the internet, longer books reaching between 500 and 800 pages still continue to be published frequently.

“What I hear from readers increasingly is that they take the phone or they take the tablet and they put them down in another room, and they go with their book, and they retreat,” Paul said.

Paul also discussed the importance of libraries in creating communities within the literary world. She grew up around the corner from a library and believes libraries hold an important place in society where readers can find the same sense of community a bookstore offers. A library also provides a place to explore options they may not have come across when browsing through Amazon’s book reviews or Barnes and Noble’s recommendations.

“Libraries are extremely important as a communal place,” Paul said. “To me, personally, there’s nothing more depressing than walking into a library and seeing more computers than there are books.”

However, Paul said, the internet can foster its own literary community, allowing unprecedented communication between the publication and its readers. Paul sends emails out to readers every Friday and tries to stay in contact with them to find out what people are reading and what people enjoy reading.

“That, for me, is the most positive thing about the internet,” Paul said. “It does offer you a much closer relationship with the readers of The New York Times because what is created through social media and through newsletters and email is a kind of dialogue between us at The Times and our readers. It’s worthwhile to me to get that feedback, that immediate response, from our readers and what resonates with them.”